Relic of Sorrow--
Remembering the Black Lynching Victims of the South

I came upon this item in a file, no doubt recovered years ago during one of my happy research forays, but unfortunately forgotten.  It does not apply to the John Brown story, but its relevance speaks for itself.  This poem, written by Charles Fred White, is headed by "Afro-American," which seems only a reiteration of the publication's title, Afro-American, dated September 1900 (p. 245).  We should not forget that after the undoing of Reconstruction, with the cooperation of the Republican Party, white terrorism was fully unleashed upon black people in the South, and for decades thereafter the violent, murderous white lynch mob reigned.

Many of us are familiar with the poignant song, "Strange Fruit," made famous in 1939 by the legendary Billie Holiday.  (As a side note, my late father, after having heard her recording of "Strange Fruit," and having no knowledge of her otherwise, referred to her quite appropriately in Italian as "Madonna Dolorosa.")  "Strange Fruit" originated as a poem by Abel Meeropol and appeared first in a Leftist publication in that era.

Yet Meeropol's poem was hardly the first to address the outrageous racist violence that beset black people for so many years in between the end of Reconstruction and the developments pertaining to Civil Rights nearly a century later.  Charles Fred White's poem was written to be sung as well, but quite bitterly to replace the lyrics of the patriotic anthem, "My Country 'Tis of Thee."   It's a song worth singing, if only in remembrance of the many men and women who died as victims of terrorism in a nation--a nation whose literary and scholarly leadership, even in the 21st century, cannot stop talking about John Brown being an "American terrorist."  No wonder black people fundamentally distrust the "American" narrative so often celebrated by the "majority." 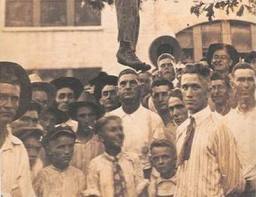 O, country, 'tis of thee,
Land of the Lynching Bee,*
Of thee I sing.
How long will this base wrong
Pollute thy freedom song?
Perpetrated by a thong
Of heartless fiends.
My native country, thee,
How I long to be free!
Thy name to love.
I long to see the time
When this most heinous crime
Will be changed to deeds divine,
Like those above.
Let wailings swell the breeze,
And ring from all the trees:
"God's will be done."
Let mortal souls awake--
Let all that breathe partake--
This spell of crime to break,
Ere the nation's gone.
O gracious God, to thee,
In thine all-wise mercy,
We now appeal!
May this land soon be brought
Out of this doom it's wrought;
For long, in vain, we've sought
Freedom to feel.
* One might expect this to have read, "Lynching Tree."  But there is no error of transcription here.  In fact, "bee" works very well, particularly in the traditional sense of a "bee" being any kind of social gathering, often including competition, and associated with an old English word associated with neighborly help among farmers.  Thus the "Lynching Bee" reflects how entire communities throughout the South were complicit, directly or indirectly, in mass murder, even genocide against black people.

And yet there is no end to this obsession among white writers and scholars about "John Brown and violence," "John Brown and terrorism," etc.  It seems to me that there are much bigger targets to hit when it comes to the themes of violence and terrorism in "America," especially since mistreatment of non-whites is so pervasive in U.S. history.  Yet it is Old John Brown who remains the favorite target of white writers, to be singled out as the defining paradigm.  I guess that's because the handful of largely contemptible white people who died as a result of his actions just matter more.


"You hypocrite, first take the log out of your own eye, and then you will see clearly to take the speck out of your brother’s eye."
Posted by Louis A. DeCaro, Jr. . . at 12:30 PM