Photo Contendere:
The Browns of eBay? 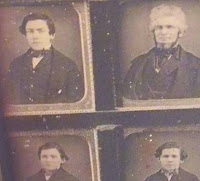 Thanks to the ever vigilant Scott Wolfe, our friend in the field and roving historical detective, we are made aware of a current eBay item on sale, purported by its owner/seller to be a set of daguerreotypes from the 1850s of our man Brown and his family.  According to the eBay description the “Image Shows fantaical [sic] anti slavery religious zealot John Brown with his wife Mary Ann, oldest son John Brown Jr and 5 more of their children.”

In fact, while the items for sale may be authentic mid-19th century daguerreotypes, they are clearly NOT images of John Brown the abolitionist and his family.  The owner/seller probably is aware that there is good reason to doubt their authenticity, but makes quite an effort to rationalize selling the dags as John Brown pics: 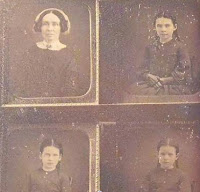 "Likeness of the elderly man to John Brown has been compared to known authentic photographs some of which are shown below. You might find a number of men in old daguerreotypes that bear a vague resemblance to john brows [sic]. However the chances are very slim that the wife would also look like John Brown's wife, and that the couple would also have a large family with all the children looking like the children of John Brown. Historical records state that John Brown took a second wife of substantially younger age, which is also shown in this picture. All total John Brown is said to have fathered 20 children. most known images of Brown show a beardless gaunt face. At the end of his life he has a long beard and a more healthy looking face. This rare image shows an intermediate beard growth."

Hilarious.  Of course, the comparison may have been made between Brown family daguerreotypes and these items, but the question is whether the comparison proves or fails—and the answer is that they fail.  The pretense that these images conform to certain criteria—a younger wife, large family, and family resemblance—is clearly rationalization on the part of the owner/seller, who is trying to unload an anonymous set of daguerreotypes at quite a profit.  In fact, although we do not have many images of the family, it is clear that this eBay family are not Browns; the younger woman bears no resemblance to Mary Brown, and the children do not correspond to the Brown family for that time period in sex or age. 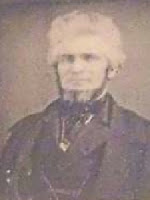 Most laughable is the owner/seller’s attempt at explaining the facial hair of the elderly man in his daguerreotype as John Brown with “intermediate beard growth”!  Not only does the man in this image not look like John Brown (nor does the hair resemble Brown’s hair at any time as far as we know), but this “intermediate beard growth” is all wrong.  It seems his beard was gray from the first time he grew it, which was around 1858, and it never appeared like the whiskers of the old man in this daguerreotype.  Some also know that at the time of the Harper’s Ferry raid, for instance, Brown was not wearing his legendary long, gray beard.  His whiskers were cropped short, but were never “intermediate” as shown in this image.  This just isn't John Brown, and shame on the owner/seller for trying to make of this an honest sale, when it is far from it.

Needless to say, if you are going to spend $5000 this Christmas for a John Brown stocking stuffer, this is not the item.  You may do better getting a deal on some loose John Brown whisker hairs or possibly a chunk of wood from his gallows.
Posted by Louis A. DeCaro, Jr. . . at 11:55 AM

yet another spurious john brown tintype?

although this gent doesn't really look anything like jb he certainly does have a luxurious beard [but did jb only have his great beard in the immediate aftermath of his kansas activities?]