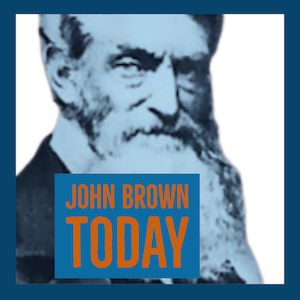 White Messiahs and Black Resentments: What About John Brown?

This evening I re-watched a part of the highly fictional movie, "Emperor" (2020) including a particular dialogue that the screenplay writers presented for the Chambersburg quarry meeting between Frederick Douglass, John Brown, and Shields Green. While the portrayal of Douglass by the wonderful actor Harry Lennix is far better than was the petulant prima dona version of Douglass portrayed by Daveed Diggs in SHOWTIME's "The Good Lord Bird," there is a similar ideological inclination in both stories. My sense is that this inclination reflects a certain contemporary black critique that really has no precedent in black history. Indeed, it is not in any sense the black viewpoint, since African Americans are not a monolith any more than any community. However, a certain view has become more commonly expressed and it has repeatedly found John Brown as a target.

To the point, in both "Emperor" and "The Good Lord Bird" television series, the charge of white privilege and/or the complaint of the "white savior syndrome" is associated with Brown's life and legacy. The gist of this charge is that John Brown, being a white man, gets more credit from black people than he should, since black heroes deserve more credit. Likewise, Brown's intentions were indicative of his "white privilege" and even paternalistic racism. It was easy for him, goes this view, to speak of invading the South. But couldn't he see the trouble he was causing to poor, enslaved black people, who would suffer the consequences of his bold plan?
I have already addressed the latter view as it has been espoused academically by Kay Wright Lewis in a chapter about John Brown in her book, A Curse Upon the Nation. (Read my response to Wright Lewis on this blog, "Did John Brown Really Make a Mistake?") However, resentment toward Brown along these lines clearly has it proponents in popular culture as well. Take for instance a 2017 piece published in The Atlanta Black Star written, presumably, by a black author named Gus T. Renegade. 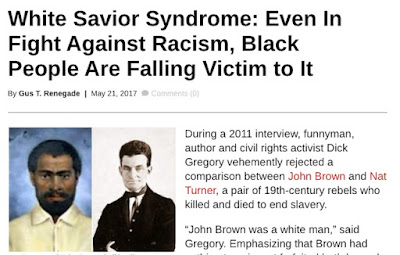 In this piece, Renegade complains about black admiration of John Brown in an article entitled, "White Savior Syndrome: Even in Fight Against Racism, Black People Are Falling Victim to It" (May 21, 2017). In his screed, Renegade begins by criticizing the great admiration that the late Dick Gregory had often expressed for John Brown:

Dick Gregory and generations of Black people have been inundated with hymns and propaganda praising Brown or any white person who’s alleged to have lent a hand to end racism. Frequently, these helpful whites garner greater attention than the Harriet Tubmans, Nat Turners and thousands of Black counter-terrorists who invested their complete existence in Black liberation.

Last evening, SHOWTIME aired the final episode of "The Good Lord Bird," which saw Ethan Hawke's John Brown defeated at Harper's Ferry, jailed, and raising a ruckus with his jailhouse letters. In the closing scene, Hawke's ragamuffin Brown slowly ascends the gallows steps and his head is covered, but we do not see the hanging. The final moments of the episode are devoted to "Onion" who gets to ride off after visiting John Brown in his jail cell on the night before his execution. 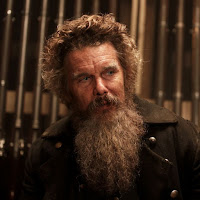 In the last moments, the faces of various black people are shown, both characters in the story as well as others, all representing the enslaved that Brown had sought to liberate. For what it was worth, it was a beautiful closing. After "Onion" disappears beyond the lens of the camera, we catch a glimpse of a feather blowing past the lens. Unlike the lingering feather that floats upward at the end of "Forrest Gump," the "Good Lord Bird" feather is barely noticeable and then is gone--perhaps resonant with the words that Brown tells "Onion" in his jail cell, that the Good Lord Bird, like the spirit, had to fly alone--perhaps a metaphor for John Brown's lone trail that began in the wilderness of Ohio in the 1800s and ended in a jail cell in Charlestown, Virginia. That's the best I can squeeze out of the series--the whole series.
As I have shared on my podcast, as a biographer, I watched "The Good Lord Bird" with mild amusement for the most part, but mainly because I learned to "bracket" my historical expectations, and just take the story as a work of fiction.  To try to correlate "The Good Lord Bird" to the historical record as some have done is a fool's errand.  Every episode of "The Good Lord Bird" departs significantly from the historical record, not only in its unworthy portrayals of Brown as a goofball and Frederick Douglass as a petulant prima donna, but in too many large and small details to name. 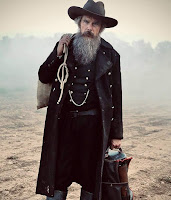 The other day I got an email from Marty Brown, one of John Brown's direct descendants, in which she informed me that she had gotten around to watching "The Good Lord Bird." To no surprise, she was understandably annoyed by the inaccuracies, particularly by how Brown's children were portrayed, such as placing John Brown Jr. and Jason Brown at Harper's Ferry, when neither of these sons went to Virginia with their father (the sons who went with him were Owen and his two younger half-brothers, Oliver and Watson, the latter two having been killed at Harper's Ferry).  "I'll never understand why writers insist on treating the Brown family like interchangeable cardboard cutouts," she wrote, "when there is so much true character to be mined and put to use." Marty added:

I understand that it's sometimes necessary in drama to conflate characters for plot purposes, but when it serves no conceivable purpose at all and runs exactly counter to the truth, it's just sloppy and stupid. And insulting. So there's my three word review: Sloppy, stupid, and insulting. You can quote me.

"The Good Lord Bird," first the novel and then the television series, is a story that appropriates history, only to chew it up and spit it out, and then expects us to have a tear in our eye at the end that will justify its abuse of history.  But fiction and (possible) television awards aside, those of us who care about the story of John Brown feel about this series like the guy who lets a friend use his apartment to throw a party. Now that the party's over and the guests are gone, we're relieved. But we're also  annoyed because we have to clean up the mess. 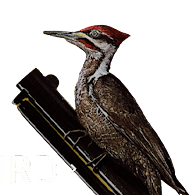 Last evening, when I was getting ready to watch the final episode, my wife Michele came into the room and passingly asked me if I was going to watch, "The Dead Bird Walking." I almost split a gut because she wasn't even being sarcastic.  It just came out that way.  But somehow, being my better half, she intuitively captured my feelings about "The Good Lord Bird."

As John Brown once said at the news of someone's death: "So we go."