Not having had the opportunity to attend the John Brown Day events in Lake Placid, NY, this year, I was pleased to find a nice article in the Adirondack Daily Enterprise (8 May).  Unfortunately, at the bottom of the article there is found the venting of yet another John Brown hater named Greg Hubbard, who unleashed a screed of misinformation and error, concluding that Brown was "vile."   Hubbard's remarks suggest the kind of pent-up hatred for Brown that seems to exist in some white folks' hearts.

Most of the time, as I have demonstrated by numerous rejoinders on this blog for over a decade now, this kind of anti-Brown screed is largely based on half-truths, misinformation, and more substantially upon bias.  Hubbard's remarks are no different.  In just a few short paragraphs, he is able to cram in lots of errors, showing that his "opinion" is in fact nothing more than an airing out of his own hatred for a man about whom he knows very little.

As Hubbard's remark reminds us, there is an abundant well-spring of contempt and hatred for John Brown in this nation, and one should not be surprised that someone like Hubbard would troll and snipe at the conclusion of an online article--the past time of ignorant bigotry.

At any rate, I've copied Hubbard's malign screed below, along with my response.   Like an old friend used to say to me, "the more things change, the more they stay the same."

John Brown, who became a Kansas Jayhawker, was a vicious man who used his opposition to slavery to kill opponents of a ‘Free Soil’ Kansas. Supporters of the ‘Free Soil’ movement often did not intend freedom for African American slaves, or banning slavery from the new state because of moral opposition, but because banning Black slaves from entering Kansas meant no competition from ‘free’ labor.

John Brown is documented as brutally killing anyone he suspected of harboring pro-slavery sympathies. Not even family members of were spared. Today he would justifiably be called a mass murderer. His reputation is now based solely on 'The Raid,' but that is not in any way a complete portrait of the man.

The widow of one of his viciously murdered victims sent him a letter just before his execution, gloating about his upcoming death.

Slavery was vile, but in my opinion, so was John Brown.
Greg Hubbard

Hi Greg Hubbard, the problem with your assessment is that much of what you say is just factually incorrect. As a biographer of the man, I offer these words only as a corrective, not to be polemical, although it is unfortunate that a lot of time is spent refuting baseless and erroneous charges like what you've offered, and which deserve a public correction. 1. JB was not properly speaking a Jayhawker. Jayhawkers emulated him, but he was his own man and not a joiner. He lent his support to the antislavery cause but much of his actions were also premised on protecting his family from local threats from proslavery enemies. 2. JB was not in agreement with Free Soil people who, as you say, were racists. JB was an absolute egalitarian and antislavery man. He disdained free soil racism, whether from northern or southern men. 3. JB was amazingly peaceful in dealing with proslavery people. He was in Kansas from the fall of 1855 and never raised a hand until May 1856, when a cadre of proslavery conspirators were exposed as plotting against his family with violent intent. With no recourse to law (there was no justice operating, esp. for antislavery people in 1856), he and a group of his sons and associated took out 5 proslavery conspirators. This was a preemptive strike and falls within the guerilla war context. What is clear, however, is how specific and limited his actions were in comparison to the violent terrorism of the proslavery presence. You cannot prove that Brown killed be simply for political differences; the evidence shows otherwise. If Brown killed a man, it is because that man intended to kill his family and this is quite arguable from the facts. Your claim is unwarranted and I challenge you to prove it, including the notion that he would be labeled a "mass murderer" today. Five men, in a war time context without recourse to law, and fully aware of a lethal conspiracy and imminent invasion by a horde of proslavery thugs, which put the invasion in check. That's not the basis of "mass murder." Finally, it is not true that JB's reputation is now solely based on the raid; many people dealing in half truths and bias continue to throw up the Pottawatomie episode, and this is a constant chore for the historian since there is so much bias without fact. Yes, Mahala Doyle wrote to Jb in jail in Virginia; the letter was probably coached by proslavery people; and let me tell you that she was no innocent. Her husband and two grown sons were plotting to kill Brown and she knew it. She knew what they were up to and didn't try to stop them. When the Browns were taking the Doyles out to execute them, she told her husband basically, "I told you what was going to happen with your devilment." Greg Hubbard, read the books and the history. You're contempt for Brown comes from a place that is not historical, actually far more bias. The question is why you despise a good man who stood for freedom. The problem is more with your perceptions or the people who have poisoned your thinking. 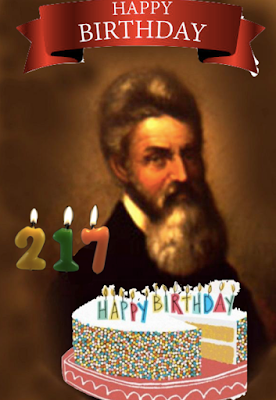 Had he been made of such poor clay as we,
Who, when we feel a little fire aglow
'Gainst wrong within us, dare not let it grow,
But crouch and hide it, lest the scorner see
And sneer, yet bask our self‑‑complacency
In that faint warmth‑‑had he been fashioned so,
The nation n'er had come to that birth‑throe
That gave the world a new humanity.
He was no vain professor of the word‑‑
His life a mockery of the creed;‑‑he made
No discount on the Golden Rule, but heard
Above the Senate's brawls and din of trade
Ever the clank of chains, until he stirred
The nation's heart on that immortal raid.

Source: Sunflowers, A Book of Kansas Poems.  Edited by Willard Wattles.
Posted by Louis A. DeCaro, Jr. . . at 10:34 PM No comments: