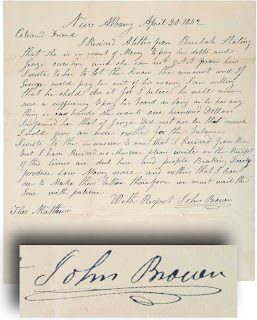 Raynors' Historical Collectible Auctions of Burlington, North Carolina, is a high-quality company that serves the interests of collectors of historical manuscripts and other historically valuable materials. While they have previously sold primary materials relating to the abolitionist John Brown and his family, they are currently selling a letter that is allegedly from the abolitionist, but which is actually written by another John Brown--not John Brown of Harper's Ferry.

Autograph Letter Signed, April 20, 1842, "John Brown," in rich deep ink, from John Brown to Thomas Matthews. Written from New Albany (Ohio) to Thomas Matthews in Baltimore, the letter refers to Brown's continuing financial difficulties. . . . One page, with attached Integral Address Leaf, postmarked "New Albany" (OH), 8.5" x 7.75", the postal address cover page has some separations and a piece missing, not affecting the cover text or the letter, otherwise the letter itself is boldly written and Fine.1

Unfortunately this is not a letter from the hand of the abolitionist John Brown, but rather from another John Brown contemporary with him. I can write this quite confidently because I am well acquainted with Brown's handwriting and the style and structure of his letters. When I saw this letter I immediately wrote to the Raynors, informing them that they are selling something of an impostor. However they have yet to respond to me, and I now fear they are intent on selling it to some poor, trusting collector who will pay at least $2000 to acquire it in the belief that it comes from the hand of John Brown of Harper's Ferry fame.

As to handwriting, the script in this letter is very unlike that of our John Brown, especially the writer's "s" and "g." However, as one who has studied hundreds of Brown's letters, the script is not the only give away. In this letter, the writer repeatedly uses "and," which is rarely found in our man Brown's letters, especially in the 1840s. Brown habitually used an ampersand (&) while this symbol has no such usage. Structurally, Brown invariably headed his letters with day-month-year while this letter uses month-day-year. He also headed his letters with city/state or county/state, while this letter uses only city. Likewise is the tell-tale signature line, "With Respect," which would have been rendered "Respectfully" by Brown--but even this usage is unusual throughout the many letters of his that survive. Finally, but not of least importance, is the signature of "John Brown," which is clearly different from the signature of our John Brown. As to content, the place, "New Albany" has no precedent in Brown's many surviving letters; nor do the names Beulah, George, or Thomas Matthews (the latter being the addressee and the writer's good friend).

In short, there are a hundred reasons why this is not a letter from John Brown the abolitionist, and no reason why it should be taken seriously as an authentic letter, except as from another unimportant contemporary of John Brown who shared the same name and lived in the same general vicinity during the mid-19th century. If Raynors' perseveres in their intention of auctioning this letter, then shame on them. They have been warned that this is not the letter they pretend it to be. To proceed thus with selling it as a letter from John Brown the abolitionist must be considered a point of greed and dishonesty.--LD
----------------------