Take Two, an online news and culture program of Southern California Public Radio in Pasadena, Calif., currently has a news feature entitled, "The strange tale of a missing grave marker in the Altadena hills," along with an audio report about the recovery of the Owen Brown grave stone.  Owen Brown (1824-89) was the third son of John Brown the abolitionist, undoubtedly named for Brown's pious antislavery father, who died in 1856 while John and several of his sons, including the younger Owen, were in Kansas.


The audio report features some welcome sound bytes of an interview with our friend, Alice Keesey Mecoy, the great-great-great granddaughter of John Brown (through daughter Anne Brown Adams), but unfortunately the reporter makes the same tired reference to the killing of five proslavery people in Kansas--entirely without context, as usual.  The reporter also opines that Owen Brown ended up in California because he was fleeing the "violence" of his father's Harper's Ferry raid.  Of course, this is nonsense.  First, the Brown boys had their eyes on California from the 1840s.  Second, Owen fled nothing beyond his fortunate flight in escaping from Maryland after his father's failure at Harper's Ferry in 1859.  Owen managed to remain out of the reach of Virginia--a reach that was thereafter broken entirely with the coming of the Civil War and the defeat of the slave masters' rebellion.  In later years, Owen was not fleeing violence or anything else.  He lived with his older brother, John Brown Jr. for a time in Ohio, and finally settled on the west coast.
If anything from those dramatic years fighting slavery can be said to have impacted Owen in later life, it was in remembering hunger.  A reporter who interviewed him in California pointed out how he carefully gathered crumbs so that nothing of his food went to waste.   By all accounts, Owen was a kind and caring man, if not somewhat odd.  A bachelor all of his life, Owen suffered an injury to his arm as a child and lived out his days with little or no use in that limb. If the Take Two story provides lackluster background on John Brown, nevertheless its most important offering is to tell the story of the grave marker from Owen's burial site, which vanished but was located by an admiring neighbor.  The neighbor is now keeping the grave stone in a secret place where it will be safe from further abuse, and possibly returned to Owens grave someday.  Currently the land upon which Owen is buried is owned by a man with neither historical interests nor community sensibilities, and who preferred to keep people off his land, despite its historical significance.  Perhaps someday the land will come into the hands of someone who will want to replace the grave stone in its proper place.

Owen Brown was born at Hudson, Ohio, November 4, 1824, and was the third son of John Brown's first family, there being twenty children in all.

Owen was with his father all through the struggle between the free state men and border ruffians in Kansas in 1836 and following years, and took part in the first pitched battle at Black jack on the Missouri and Kansas border, and also at Ossawatomie where his younger brother, an unarmed lad, was deliberately shot down in the street. Jason was also in these battles.

Owen was with his father at Harpers Ferry, a participant in that memorable raid which struck the death knell of slavery, not only in the United States but throughout the civilized world. He was one of seven who escaped from there through mountain fastnesses and swamps and forests and sassafras leaves, and such things as they could possibly devour without making a fire to cook. For they were pursued by soldiers and citizens with dogs and guns, and a price was set on their heads. The Atlantic Monthly some 15 or 20 years ago published a narrative of their escape, which excels in thrilling pathos, and in plain matter-of-fact incidents of hardship, endurance, and apparently supernatural deliverances from discovery and capture, the most vivid conceptions of fiction. Two of them made reckless ventures to get food and were captured and hung. The remaining five escaped, Owen finally reaching his brother John's home on an island in Lake Erie.

About five years ago Jason and Owen Brown took a homestead on a bench of mountain land five or six miles north of Pasadena, at the settlement now called Las Casitas. This they subsequently sold and took land higher up the mountain side, built a cabin, cleared and worked a few acres, and lied there-two feeble old men, alone. (Jason was with his father in the Kansas struggle, but was not at Harpers Ferry.) They were much visited by tourists and citizens, some from mere curiosity and others from a warm sympathy with the historic career of the family. They had made a good wagon trail up to their mountain hermitage, and were continuing it as a donkey path to the top of the mountain known as Brown's Peak, but it is not completed yet. Owen had a desire to be buried on the top of Brown's Peak; and if Jason ever succeeds in finishing the trail he will try to have his brother's grave up there as he desired. But meanwhile he is buried on a lesser peak on their mountain homestead. Owen Brown was never married. 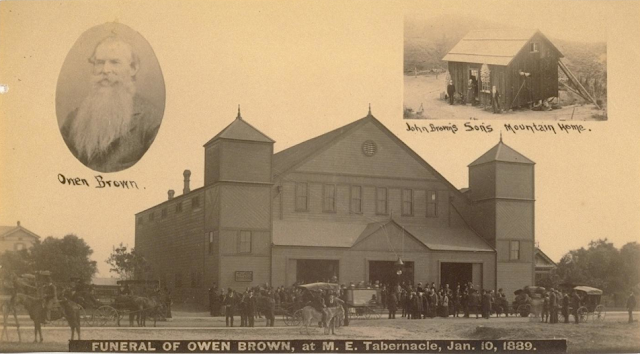 Last Days.-December 30th the aged brothers came down to the city to attend Col. Woodford's gospel temperance meeting in the tabernacle. We met them there both Sunday and Monday nights. But Owen was taken sick and had a chill after going to his sister Ruth's home from the meeting, and in a week he died of typhoid pneumonia. He had been failing for some months; this had been noticed by his relatives and friends. Monday he had worked pretty hard, then lay down in the bright sunshine on the banks of the Arroyo and slept. In the evening he went to the great temperance meeting, and being very deeply and ardently interested in the cause, he put his last cent of money into the collection; had nothing to pay street car fare with, and so walked over two miles to his sister's house, after the meeting. These over-exertions were probably the immediate cause of his last sickness, although he was out some on several days after the first attack, but was not able to attend the meetings any more.


At the women's meting on Tuesday he and Jason were elected honorary members of the W. C. T. U. He was much pleased with this, and said there was no cause he would more gladly contribute his $1.00 membership fee to aid. So he was buried with the W. C. T. U. white ribbon on his breast.

The last words he uttered that could be distinguished were: "It is better-to be-in a place-and suffer wrong-than to do wrong."
Posted by Louis A. DeCaro, Jr. . . at 10:43 AM No comments: