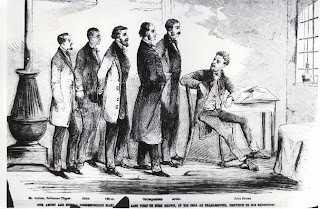 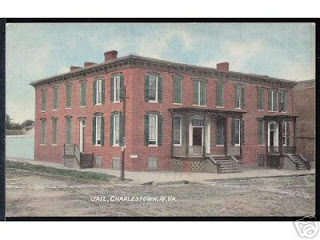 From his arrest his October 1859 until his execution on December 2 of the same year, John Brown the abolitionist was held prisoner in the jail at Charles Town, Virginia, now West Virginia. The original jail, pictured in this undated, colorized image, was also residence of the jailer John Avis and family. Brown and his surviving men from the Harper's Ferry raid were all incarcerated here until their executions, the last of which took place in March 1860.

Recently photographer J. J. Prats of Springfield, Virginia, has visited and photographed the Charles Town Post Office, which now stands on the site of the old jail in town. Several of his photos are posted on the Historical Markers Datebase (see link below), two of which are posted here showing the post office as the original site where Brown was held prisoner by the State of Virginia. 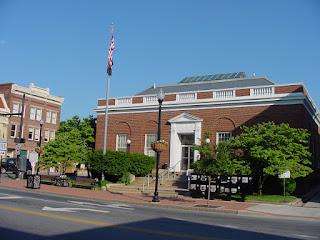 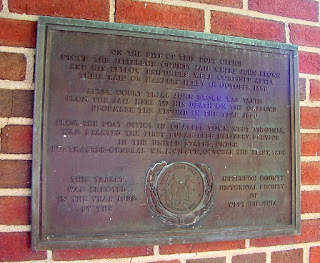 "On the site of this Post Office stood the Jefferson County Jail where John Brown and his fellow prisoners were confined after their raid on Harpers Ferry in October 1859. After court trial John Brown was taken from the Jail here to his death on the gallows December the Second in the year 1859. From the Post Office in Charles Town, West Virginia, was started the first Rural Free Delivery service in the United States, under Postmaster-General Wm. L. Wilson, October the First, 1896. Erected 1932 by the Jefferson County Historical Society of West Virginia." 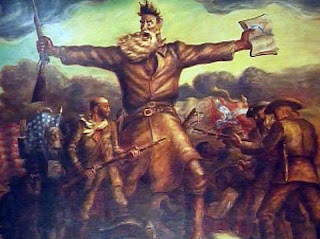 A large, striking, portrait of controversial abolitionist John Brown, painted in all his fury.

Towering images of a Kansas frontiersman and Spanish explorers.

"The murals that Mr. Curry painted in the Capitol was done in the the early 1940s. Mr Curry was commissioned to paint the East Wing where we are now, the West Wing, also the rotunda," said Don Dunn, Tour Guide for the Capitol.

Perhaps the most famous and one of the most controversial paintings of Curry is that of John Brown. Dunn says critics did not like the use of John Brown, the color scheme, and the overall menacing look of the mural, including the tornado and fire.

"Mr. Curry explained any person that he painted, which he felt was important to Kansas history, he was gonna paint larger then life," Dunn said.

"The tornado, he explains, as the gathering of the storms of war. The fire as fires of war, but it's also put there so show the destruction that the Civil War caused across the Kansas territory," Dunn said. . . .

Curry was also commissioned to paint the rotunda, but it didn't happen.

"After he completed the paintings in the West Wing, Mr. Curry was basically fired by the legislators," Dunn said.

Curry left the state, never signing his artwork. He declared it unfinished because he didn't paint the scenes planned for the rotunda.

John Steuart Curry died of a heart attack in August of 1946 at the age of 48. His wife said it was of a broken heart, being rejected by his home state. But, Kansas finally did apologize to Curry in 1992 the legislature issued an official apology for its treatment of the artist.

Postscript: The Curry murals were nominated for the Eight Wonders of the World.