Autographa--
Two John Brown Letters to be Auctioned in October

One of the leading auction houses for historical manuscripts, Heritage Auctions of Dallas, Texas, is currently advertising two John Brown letters to be sold between October 16-18, 2013.  Probably coincidentally, the letters will be sold during the 154th anniversary of the Harper's Ferry Raid (or as some of us Browniacs like to call it, "Independence Day"). 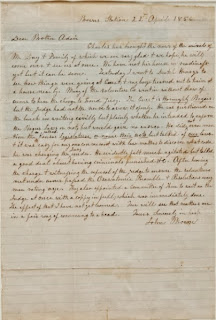 The most notable letter, starting at $4000, is written from Brown to his half-sister and brother-in-law, Florella ("Florilla") and Samuel Lyle Adair on April 22, 1856.  Brown wrote the letter from his sons' settlement, known as "Browns Station," to the Adairs in the burgeoning free state center of Osawatomie. (Brown later earned the sobriquet, "Osawatomie Brown" engaging the proslavery enemy at that place; the enemy identified Osawatomie as a target of assault because it, following the town of Lawrence, was distinguished for its anti-slavery stance.)  The Adairs met at Oberlin College and Samuel was an ordained Congregational minister; they went to Kansas in advance of all the Brown family to establish missions work, and were also expressly anti-slavery.  Brown's letter to the Adairs reports events preceding the attempted coup by proslavery terrorists--including the proslavery courts that endeavored to prosecute free state activists, especially abolitionists like the Browns.  Brown was particularly mindful of a proslavery Judge named Cato, who was intimidated the previous day when Brown and his men showed up at court unarmed to oversee the hearing.  "The Court is thoroughly Bogus," Brown wrote, but the Judge had not the nerve to avow it openly."  Brown also mentions the arrival of a relative, Orson Day, the oldest brother of his wife, Mary Day Brown, who answered the free state call and migrated to Kansas; the Browns labored to prepare a dwelling for Orson in advance of his arrival.

A little over a month after this letter was written, Brown, some of his sons, and a number of local allies, struck a preemptive blow against proslavery neighbors involved in a plot to eliminate the abolitionist element in their vicinity.  The strike resulted in the deaths of five proslavery men, including a man and his two sons, both young adults.  Unfortunately, this so-called "Pottawatomie massacre" has been consistently portrayed in a one-sided manner--as if Brown were the originator of terrorism in the U.S., and as if the attack were simply an act of malice, retaliation, or gratuitous political violence.  Most popular narratives continue to present a one-sided approach and do not take into consideration the evidence that abolitionists in that locale were literally in danger of an imminent assault by invading proslavery forces, and that the proslavery assault was enabled and guided by local proslavery people--including the unfortunate "victims" of Brown's assault.  Initially, Brown had gone to Kansas to protect his family and support the free state cause against militant assault; a genuine study of the evidence will show that Brown would not have taken such harsh action were it not considered a matter of necessity, not only by him, but by others in the vicinity.

Of additional interest is a bonus: an older letter from Samuel Adair to Florella, only months before their marriage in 1841.  Adair wrote from Oberlin, Ohio, but speaks of being called to pastoral positions.  He answered one such call in a Congregational Church in Sandyville, Ohio, where he was pastoring at the time he married John Brown's younger, half-sister Florella (born 1816).  Florella first met Samuel while studying at Oberlin College, notable in history for both its anti-slavery and coeducational stance, as well as its heterodox "Perfectionist" doctrine, especially espoused by evangelist Charles G. Finney, who divided his time between Oberlin and New York City.

As for the Brown-Adair letter of 1856, it is not unknown to me, although this is the first time in recent years (as far as I'm aware) that it has come up for sale.  In the mid-20th century, the Rev. Clarence S. Gee, a Brown documentarian and genealogist of the Brown family, obtained a copy of the letter, which today can be found in the Gee Papers at the notable Hudson Library and Historical Society in Hudson, Ohio.   Prior to that, Katherine Mayo (who did the greater part of the research work for biographer Oswald Garrison Villard) made an excellent transcription of the letter in 1909, now available in Villard Papers of Columbia University's Rare Book and Manuscript Collection. 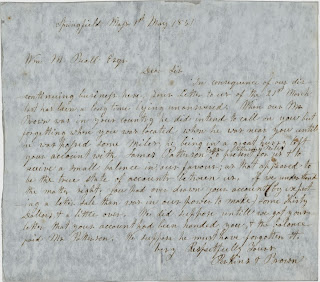 The second letter is not signed by Brown, but represents business correspondence of the firm of Perkins and Brown, which the abolitionist founded with Simon Perkins, Jr. of Akron, Ohio.  The letter, dated May 1, 1851, is less interesting to many people, who are mainly focused upon Brown's controversial abolitionist activities.  However, for a few enthusiasts like me, it is always exciting to see any document in Brown's hand, including those offering insights into his earlier life.  The letter, written to one of Perkins and Brown's clients named Beall, pertains to matters of an overdrawn account.  The letter reflects the extensive business loose ends and concerns that plagued Brown following the folding of their wool commission operation in 1849; that spring, Brown had moved his family to the Adirondacks, but he was obligated to make frequent and extensive trips to Springfield, Mass., the site of their former operation, to deal with legal and business matters over the next few years.  Conventional writing on Brown's wool business has greatly exaggerated his role as a "bad businessman" in the failure of the wool commission house.  While there is some truth in the portrayal, it is also true that Brown's efforts to support wool growers met with unified opposition and counter-tactics (including surveillance and subterfuge) by powerful manufacturers in New England.  He also found it difficult to work with the wool growers themselves, who had not yet evolved as a community in regard to their collective interests.  Their refusal to work cooperatively for the greater good in preparing wool for market, as well as their ongoing demand for immediate results from Perkins and Brown, proved a great disadvantage in addition to the opposition of manufacturers.  As a last measure, Brown tried to circumvent the powerful manufacturers by proposing partnerships with European firms in Belgium and France.  However,  ultimately he found them unreliable, particularly when they could purchase cheaper wools from their own colonial wool growers.  More often than not, Brown was left holding the (wool) bag, and bears the blame for the Perkins and Brown failure.  Yet a half-century later, the wool growers of the same region finally formed a coalition and accomplished many of the things that Brown had sought to realize in the 1840s.  It seems that Brown was a multi-faceted visionary.

The letter from Perkins and Brown is entirely in John Brown's handwriting but does not have his signature, rather being signed, "Perkins & Brown."  It was previously put for sale by Signature House Auctions (Bridgeport, West Va.) in 2010, and either was not sold at the time, or is now being resold by Heritage Auctions with a starting price of $1,500. 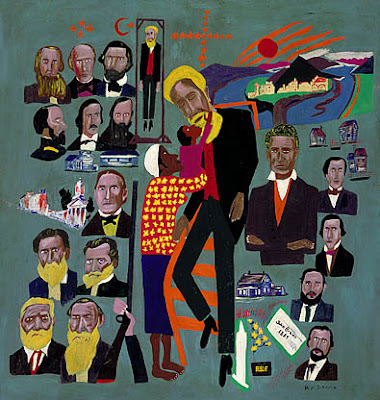