On the Road in Kansas, July '21: Sharing Some Pictures

This summer I was able to make a long anticipated trip to Kansas to do some touring and finally get to the beautiful Kansas State Historical Society to do some serious research on the Old Man.  Happily, I was able to meet up with my old friend, Ian Barford, an actor-scholar whom I've known for a good many years, and who shares a passion for John Brown with me.  (Here's a link to Ian's page on the website of Steppenwolf Theater Company.) We did as much touring as we could do in a day-and-a-half, and then spent the rest of the time researching in the archives. It was an ideal sojourn, fruitful and inspiring, and I wanted to share some pictures with my readers and podcast listeners.

Black Jack
Here are some pictures from the site of the Battle of Black Jack (in present day Baldwin City, Kan.) which took place on June 2, 1856, when our man Brown faced off against the pompous editor-turned-soldier, Henry Clay Pate.  Outnumbered and outgunned, Brown and his men nevertheless got the better of Pate and took him prisoner.  In 1859, after Brown was defeated and jailed in Virginia, Pate made sure to visit Brown in Charlestown jail and gloat. But Brown was not easily intimidated. Pate the loser went on to try to capitalize on the Brown story by publishing a little book about him and then tried to go on tour, but he was as successful an author as he was a military leader (see my book, Freedom's Dawn: The Last Days of John Brown in Virginia, pp. 202-03). 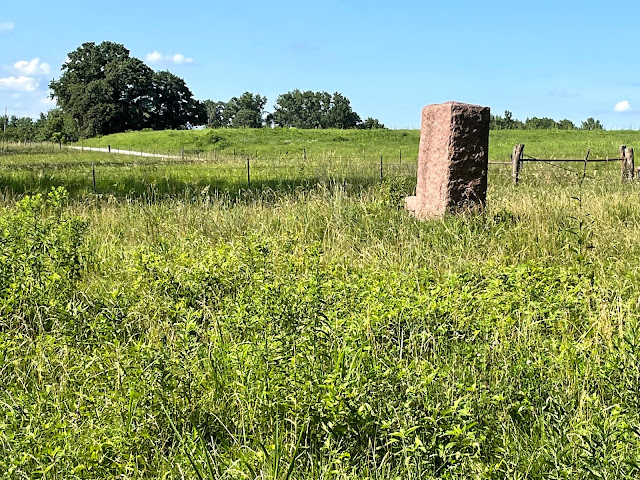 Below, left, is our friend and guide at Black Jack, Kerry Altenbernd, who has devoted years, dollars, and devotion to preserving the Battle Jack grounds and the legacy of John Brown in Kansas.  (Click here to visit Kerry's website, "John Brown Speaks.")  Below, right, Ian Barford poses by marker #7, the site where Brown took Pate's surrender.
Osawatomie
Next we drove over to Osawatomie (OH-sawatomie) to see the Osawatomie Museum which houses the Adair Cabin, and is situated on site of the Battle of Osawatomie, which took place on August 30, 1856.  Nearby also is the monument to the free state fallen (below), especially being the resting place of Brown's son, Frederick, murdered by the Rev. Martin White, who led the proslavery invasion, and the murders sparking the battle. (Reliable evidence states that Frederick's holster was still snapped, so he had no time to draw his gun before being gunned down by the murdering Baptist minister White. Another free state man named David Garrison was murdered at the same time, and is also interred at the same site.) As I recall from doing my research, a shotgun was put to his mouth by his proslavery killers.
Below is a display of the Battle of Osawatomie and my pan shot of the grounds taken from the entrance. To the upper left at the top of the hill is the museum which houses the Adair Cabin. 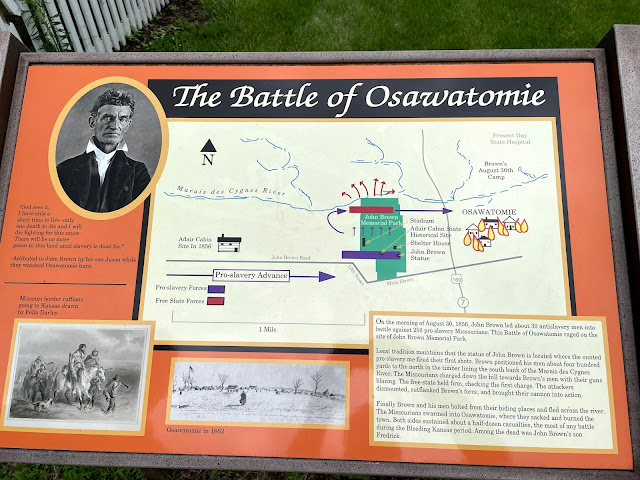 Post-John Brown, Osawatomie has an interesting history as a memorial ground. In 1877, the "soldier's monument" above was dedicated in remembrance of John Brown and those who fought in the Battle of Osawatomie, especially those who died that day in 1856. In 1910, the John Brown Park was dedicated on the site of the battle, and the ceremony was presided over by Theodore Roosevelt, by then former President of the USA. In 1935, the statue of John Brown, sculpted in Paris by George Fite Waters, was dedicated.
Undoubtedly, the John Brown statue by Waters is one of the highlights of the Osawatomie grounds.  It is strikingly lifelike, without any stylization or "larger than life" intention, as can be found in the other statues and paintings of Brown. Although Brown did not wear a beard in 1856, he was wearing a beard when he returned to the territory in 1858.

We were happily hosted by Grady Atwater (below, right), the site administrator of the museum and John Brown aficionado, who gave us a walking tour of the battleground (below, left) and then the Adair Cabin, sometimes (mistakenly) known as the John Brown Cabin.  Grady is a veteran researcher and historian and can talk extemporaneously on the subject of Brown in Kansas, so the tour was rich and is highly recommended.  Grady is a community educator as well, and one aspect of his work is contributing incisive and informative articles to the local press to keep John Brown before the public--always in a clear and authoritative manner, something that Brown often has not received over the decades.  In fact, not long after our visit, Grady published a great piece on the Pottawatomie killings of 1856 in The Miami County Republic online (17 July 2021), highly recommended.

Samuel Adair was a Congregational minister and missionary who preceded John Brown's sons by moving to the Kansas territory. His wife, Florella Brown Adair, was John Brown's younger half-sister. When Brown arrived in the territory in late 1855, one of the construction projects he undertook was to install a loft in the cabin, which Atwater explains provided a measure of security for the Adair children since free state settlers were subject to attack by proslavery terrorists.
Over the years, the Osawatomie museum acquired a number of important items that belonged to Brown or directly relate to his life in Kansas and elsewhere. My favorite is his hat--something rarely portrayed in pictures, and a most unique. According to Atwater, the hat was made by the Native American free state ally, "Taway" Jones, who held property in Osawatomie and was a friend of the Adairs and Browns. The hat is worn and faded but still intact, and it doesn't take much imagination to picture it upon Brown's head, the brim just above his "meat-axe" shaped nose (as characterized by his sons). Frankly, it is no exaggeration to say that seeing this hat was one of the goals of my trip.
Most interestingly, this was the hat that Brown wore at Harper's Ferry, although he has often been portrayed wearing "cowboy" styled hats, he wore this unique style of hat against the cold night air of October 16, 1859. The hat apparently was restored to him after his defeat in the Harper's Ferry engine house and then given to his wife Mary in a small trunk with other items the day before his execution. It was eventually passed into the hands of the Kansas Historical Society, and finally found its way to the Adair Cabin museum.  This appears to be the hat portrayed in the sketch below which shows Brown, riding his mule "Dolly," in an 1877 article by L. Witherell ("Old John Brown," Weekly Gazette [Davenport, Ia.], 21 Nov. 1877) 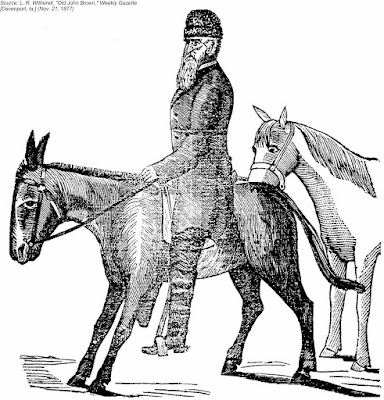 Pottawatomie
Before heading for the archives in Topeka, Ian and I had one more important stop: Pottawatomie Creek, the site of Brown's bold and bloody strike in May 1856 that left five local proslavery men dead.  We somewhat awkwardly found our way down to Pottawatomie Creek in Lane, Kansas, and drove down as close as we could to Mosquito Creek, where the Browns camped before making the strike. We walked down, across some railroad tracks and got a glimpse of the area where the Browns set out for their bloody raid on the night of May 24.  Quite pleased with ourselves, we brandished our fists in solidarity, but were shortly driven away from the creek by a band of violent mosquitos.  As Ian quipped, "Brown is probably smiling and saying, 'So you wanted to see Mosquito Creek, eh?'"  Yep, bites for days.
Some are quick to point out that none of the men killed (three Doyles, Wilkinson, and Sherman) were not slaveholders. But Brown did not target them because they were slaveholders, or even because they were proslavery men. Rather, Brown and other free state men ascertained and confirmed that these men were acting local proslavery provocateurs and guides for an invading (and illegal) army of proslavery terrorists, and that they themselves had targeted the Browns for attack.  In the absence of protection from law enforcement in the territory, Brown and his men agreed to take action by eliminating five terrorist enablers.  For all of the noise that Brown's critics have made about this so-called "massacre," the reality is that it was a preemptive strike, that the men killed were prevented from very shortly doing the same thing to the Browns, and--really--the killings showed a lot of restraint and targeted discipline.  Had Brown wished to rampage and kill (like the proslavery men had done and would do again and again in the territory), he could easily have killed many more proslavery men.  But Pottawatomie was simply a decisive guerrilla strike that threw the enemy into confusion and probably bought the free side three more months before another attack was organized.
To put it another way, we feel no need to apologize on Brown's behalf in the retrospect of history.  In fact, to turn a phrase from the late Boyd B. Stutler, the Pottawatomie five were more or less some "bad eggs in need of killing."  At least two of us tend to agree.--LD
Posted by Louis A. DeCaro, Jr. . . at 12:55 AM 5 comments: