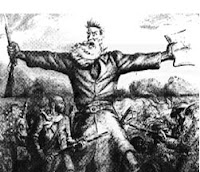 Holly Phaneuf, Ph.D. (who takes a nice picture, as you can see), is a biochemistry professor at the University of Utah with an interesting ancestor. William Harrison Combs, her great-great-grandfather, was a school teacher in Springfield, Wisconsin, at the time that our man Brown was hanged in December 1859 by the Old Dominion. Recently in her blog, Dr. Phaneuf has thankfully transcribed some interesting diary entries from Combs, who was only 19-years-old when he "commenced" as the "Pedagouge of District No. 9 Towns of Springfield and Dane, County of Dane State of Wisconsin," on December 5, 1859--the Monday immediately following Brown's execution down in Virginia (on Friday, December 2). On December 15, schoolmaster Combs was reading news reports, perhaps relayed from The New York Tribune, regarding Brown's execution, the widow Brown and family, and the abolitionist's famous jail house letters. It was the publication of Brown's letters which not only made him one of the most famous martyrs in history, but also helped to move many northerners out of their complacency and moderation with respect to the unrelenting audacity of the Slave South. Combs's brief entry is thoughtful and sensitive--a private entry that in many respects captures the sentiments of many people scattered throughout the North who were drawn to Brown by his brave death and uncompromising witness. We are grateful to Dr. Phaneuf for sharing her family treasure, not only as a testimony to her ancestor's dedication and hard work, but to Brown's real impact upon a whole generation--a generation that shortly went to war singing, "John Brown's body lies a molderin' in the grave, but his soul goes marching on."
*******
"December 15, 1859
This evening I have been reading the account of the execution of John Brown and the letters of sympathy which he wrote to his wife and children. All the sympathies of heart and all that is noble in my nature unites in pity for the fate and admiration of the brave old man. Walking to the scaffold with a smile on his countenance to offer his life on the altar of slavery. The Demon of Slavery once more rests himself in fancied security after satisfying his inhuman thirst with the blood of Old John Brown. John Brown has passed from the Bar of Virginia Justice to the Bar of the Judge of all in Whose court an undying love for freedom is not called Treason." William Harrison Combs
Posted by Louis A. DeCaro, Jr. . . at 10:06 PM 2 comments: 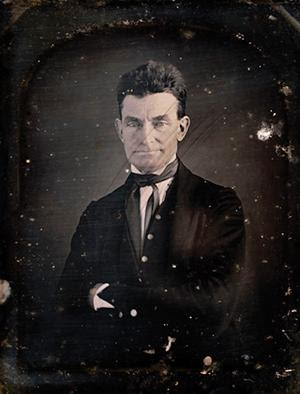 Rare Photo Finds Home in KC
Nelson-Atkins Will Add John Brown Daguerreotype to Hallmark Photo Collection
KC Community News Online
Wednesday, January 9, 2008
The Nelson-Atkins Museum of Art is planning to add a rare daguerreotype of abolitionist John Brown this spring after announcing last month that it was the unnamed institution that purchased the photo at auction.

According to a news release from the museum, the Hall Family Foundation purchased the work, one of only six know daguerreotypes taken of Brown and possibly the earliest, on behalf of the Nelson-Atkins.

“We are honored to have this portrait join the Hallmark Photographic Collection at the Nelson-Atkins Museum of Art,”

photographic curator Keith Davis said. “This work has tremendous meaning for out regional community, and it is a pivotal daguerreotype for the period. It is important to us that the public will be able to come see this work in the context of the greater photography collection in the months ahead.”

The museum plans to begin displaying the John Brown piece in March, and it can be viewed free of charge.

Brown lived in Osawatomie before the Civil War and led a raid on proslavery men in 1856, killing five. His action brought retaliation from border ruffians, and in what’s known as the Battle of Osawatomie, five of Brown’s men, including one of his sons, were killed.

His later raid in Harpers Ferry, W.Va., was designed to unite enslaved African-Americans in 1859. That raid led to his execution, but it also escalated the tensions that some historians say led to the Civil War.

According to the museum, the photograph was passed down from Brown to his daughter, Annie Brown, then on to her granddaughter, thence to her grandson and his wife.

Cowan, who leads one of the nation’s top auction houses, said the piece was the most important photograph his company had handled.

But its value is almost as much about the photographer as it is the subject.

“This extremely rare and riveting portrait is double significant,” said Theresa Leininger-Miller, associate professor of art and history at the University of Cincinnati. “Not only as one of the earliest daguerreotypes of the revolutionary abolitionist, but also because the long-lost image was made by the remarkable African-American photographer, Augustus Washington.”

Washington ran one of the most successful daguerreotype businesses in Hartford, Conn., and a collection of his works is on display at the Smithsonian Institution’s National Portrait Gallery.
By Jeff Gulley, jgulley@miconews.com
Posted by Louis A. DeCaro, Jr. . . at 2:28 PM No comments: