Congratulations Are in Order: John Brown Lives! Gets $31K Grant

John Brown in the News

A NOVEL ABOUT JOHN BROWN COMES TO TELEVISION

Ethan Hawke is to star in Good Lord Bird, an eight-part, limited series based on the novel by James McBride.

"Good Lord Bird is one of my favorite books, told with wit, grace and wisdom by the great James McBride," Hawke said in a statement Monday. "Bringing this story to the screen has been a passion project of mine, and I am incredibly fortunate to have partners who are equally enthusiastic and are making it a reality — my wife and producing partner Ryan Hawke, and my longtime friends at Blumhouse."

"This is just the right time for The Good Lord Bird," McBride said. "I wrote it to show we Americans are family — dysfunctional, screwy, funny, even dangerous to one another at times, but still family nonetheless. Old John Brown always had a knack for landing into the right place at the right time. I'm delighted he's landed in the lap of one of America's most gifted and literate actors."

University of Detroit Mercy School of Law recently hosted “Detroit’s Abolitionist Moment: 160 Years of Fighting for Justice,” a symposium celebrating the historic March 12, 1859 meeting of famous abolitionists Frederick Douglass and John Brown at the home of William Webb in Detroit. The event was scheduled for Tuesday, March 12 from 9 a.m. to 12:30 p.m. at the Detroit Public Library’s Clara Stanton Jones Friends Auditorium at 5201 Woodward Avenue in Detroit. The event was open to the public.

The symposium, which is made possible with the support of the Dewitt C. Holbrook Memorial Trust, honors the 160-year anniversary of the historic Douglass and Brown meeting by exploring the context in terms of antislavery, black activism and the Underground Railroad in Detroit; the setting of the meeting at William Webb’s house; the series of events that brought John Brown to Detroit; and the intellectual anti-slavery approaches of Douglass and Brown.

The symposium features a keynote address by David S. Reynolds, distinguished professor of English and U. S. History at the Graduate Center of the City University of New York. Reynolds is the author of “John Brown, Abolitionist: The Man Who Killed Slavery, Sparked the Civil War, and Seeded Civil Rights.”

Rich Smyth's Where Are They Now: BLEEDING KANSAS (PART 2)

Charles W. Dow died at the hands of Franklin Coleman. There is some confusion over the exact date of the shooting. One source says Dow died on November 21st 1855 while others say December 20th. Dow's tombstone in Oakwood Cemetery reads December 20th 1855. According to the Lawrence Herald of Freedom newspaper, Dow's obituary says November 21st.1

According to one source, Coleman raised his shotgun, aimed at Dow, and pulled the trigger. The percussion cap exploded but the gun did not discharge. Dow heard the noise and turned to Coleman, motioning with his arms and imploring him not to fire. Coleman replaced the exploded cap with a fresh one, aimed, and pulled the trigger again. The gun fired and Dow dropped dead in the road, having been hit in the chest by at least nine lead slugs.2  Dow was initially buried on his land claim but was later moved to Baldwin City's Oakwood Cemetery.  The cemetery is located on North 200 Road between 6th and 3rd Streets in Baldwin.

James Burnett Abbott was one of the original settlers and Free-state activists in Kansas. During his life he worked as a teacher, shoemaker, representative and senator in the State Legislature, Indian agent, director of the Kansas State Historical Society, also involved in private business ventures, including the Leavenworth, De Soto, and Fort Scott Bridge Company along with the Western Medical and Chemical Company.3

James died on March 2nd 1897 in Desoto. Kansas and was buried in DeSoto Cemetery within the city, lot 112. He was 79 years old.

Elizabeth died two years later on July 23, 1899 and is buried alongside her husband. All of their children are buried with them in the same plot.

James Abbott and his wife Elizabeth are marked by the stone in middle; Katie is on left; memorial with children's names on right.

The cemetery is located on West 87th Street in the town of Desoto.

Jacob Branson was born in Ohio in 1807. He was an Indiana pioneer and Kansas Abolitionist. It appears Jacob was married twice. The first was to Polly Allen. He then married Lydia Jane Ward (1808-?), on February 20th 1827. Although it is believed that Jacob and Lydia did not have any children of their own, they adopted many.

Franklin Coleman claimed self-defense in the shooting of Charles Dow. He left his wife and child with friends and headed to Shawnee Mission to give himself up to the governor and also to avoid being captured by a Free-state mob. Indeed, a Free-state posse searched his claim and the house where his family had been staying, looking for him.

Coleman, not finding the governor at the territorial capitol surrendered to pro-slavery Sheriff Samuel Jones who released him on $500 bail. Franklin then moved his family to Westport, Missouri. On November 26, Coleman’s house in Kansas was burned to the ground.

After an intense three-hour battle, Pate and twenty-two of his men were defeated and taken prisoner by John Brown. As it became apparent that the pro-slavery militia was going to be routed, Coleman decided to kill the Free-state men who Pate and his men had earlier taken prisoner. As Coleman approached the tent where the prisoners were being held, they bolted, running for their lives. One, a Dr. Graham, a resident and founder of Prairie City, ran towards the Free-state lines. Coleman fired, and Graham was wounded twice, once in the thigh and once in the back, but he made it to safety. The injuries were not life threatening, and he would recover from his wounds.

Coleman was never tried for killing Dow. After that, he disappears from the historical records.

There are two local legends about the demise of Coleman both concerning a cave located near Eisenhower Street in Baldwin, Kansas.

The first has him being chased by Free-staters after the murder of Dow. He took refuge in a cave that collapsed when he began firing his gun. The other story is that Coleman was returning from the gold fields of Pikes Peak and was attacked by robbers, when he hid in the cave. Again, it collapsed killing him as he fired his gun.4

It is not known where Franklin Coleman is buried or if his remains are still in the cave near Eisenhower Street in Baldwin, Kansas. 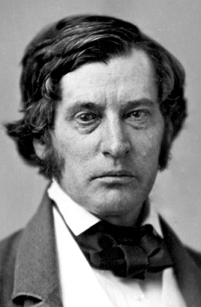 Charles Sumner, American politician and Massachusetts senator was the leader of the antislavery forces in that state. A bachelor, Charles was friendly with President Abraham Lincoln and friendlier with the President’s wife, Mary Todd Lincoln, often visiting her in the White House.

After Lincoln’s death and the end of the Civil War he began a romantic relationship with Alice Mason Hooper, the widowed daughter-in-law of Massachusetts Representative Samuel Hooper. They married in October, 1866. There would be no children from the union and the marriage was a short, unhappy one. Almost immediately Alice began attending public events accompanied by a Prussian diplomat named Friedrich von Holstein. The marriage lasted less than a year.

Charles Sumner had been ill for quite some time prior to dying of a heart attack at his home in Washington, D.C., on March 11, 1874.

Preston Smith Brooks was a Democratic Representative from South Carolina, and an advocate of slavery and states' rights.

He married Caroline Harper Means (1820–1843). While pregnant with their first child, Whitfield D. the birth proved complicated with both mother and child dying.

Brooks died on January 27, 1857 unexpectedly from croup (viral infection of the upper airway). The official telegram announcing his death stated "He died a horrid death, and suffered intensely."

He was buried in Edgefield Village Cemetery - Edgefield, South Carolina along with second wife, Martha, and daughter, Sallie. 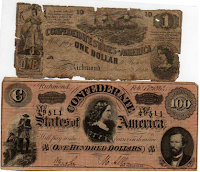 Of note is another Civil War figure buried in the same cemetery near Brooks; Lucy Petway Pickens. Known as the “Queen of the Confederacy”, she is the only female to be pictured on Confederate States currency. Lucy donated her jewelry to the cause and spent much effort aiding the Confederacy. Some claim she was the model for Scarlet O'Hara in Margaret Mitchell's 1936 novel Gone with the Wind.

Lucy’s husband was the Governor of South Carolina.

Edgefield Village Cemetery also known as Willow Brook Cemetery is located at 212 Church Street in the town of Edgefield.