I’m happy to report that the Winter 2019-Spring 2020 issue of 360 Review Magazine features a story by Springs Toledo, an old friend, an alumnus of the 1996 Mont Alto (Pennsylvania) conference on John Brown.  Toledo is a seasoned author, widely known as one of the foremost authorities on boxing and a string of notable works on the subject: The Gods of War (2014), In the Cheap Seats (2016), and Murderers’ Row: In Search of Boxing’s Greatest Outcasts (2017).  Less known to his boxing following, however, is the fact that he is the author of The Hanging of Old Brown: A Story of Slaves, Statesmen, and Redemption (Westport, Conn.: Praeger, 2002).

Toledo’s latest essay on the Abolitionist, “Old John Brown’s Freedom Ride: An American Outlaw & Twelve Fugitive Slaves,” is a wonderful narrative about Brown’s role in liberating a party of enslaved people from Missouri in late 1858, and escorting them along a perilous and difficult winter trek that culminated with their entry into Windsor, Ontario, just across from Detroit, Michigan.   His story is beautifully written, poignant and fascinating.  What adds to this fine essay is that Toledo provides insights based upon research on the lives of the liberated black people in Canada.  Beautifully illustrated, this piece is definitely recommended. 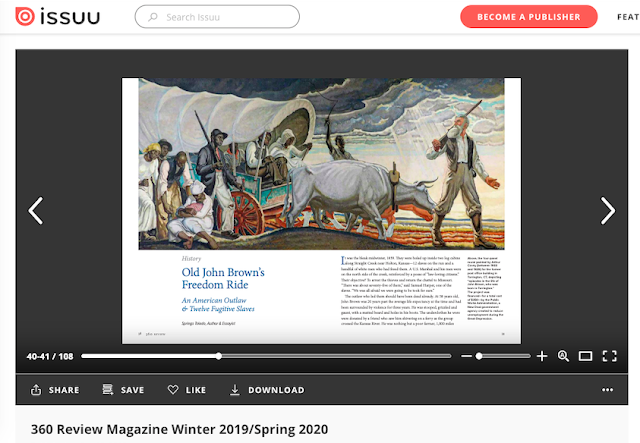 You may read “Old John Brown’s Freedom Ride” by clicking on the this link:
https://issuu.com/umary/docs/360_v2.2_final/40

Who Needs The Good Lord Bird When One Has Huck Finn and John Brown? 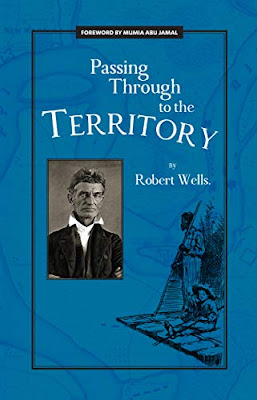 Robert Wells’s groundbreaking novel, Passing Through to the Territory (2010), “is a profound meditation, told with wit and insight, with compassion and anger about the United States in mid-19th century just before the outbreak of our great Civil War” (Louis Segal, Ph.D.).  As historical fiction, it is a work of genius that both extends the narrative of Huckleberry Finn and counters the slander against John Brown that has enjoyed such wide acceptance in the United States in the past.  Segal continues that Passing Through to the Territory is “written in the voice of Huckleberry Finn and, by extension, in the voice of Mark Twain, and herein gives an account of Huck and Jim Daniels’ experiences after their abandonment by Twain in the closing chapters of Twain’s Huckleberry Finn.”  However, Wells makes a brilliant connection, linking the story of Huck and Jim to antebellum Kansas territory, “Bleeding Kansas,” and slavery to John Brown and the coming of the Civil War.

Readers may know that I’m not the biggest fan of fiction, but I look forward to reading this brilliant contribution, which already is on my short list of valued fiction about John Brown.

Readers may purchase a copy of PassingThrough to the Territory using this link.