Season's Greetings
He Would Have Loved It 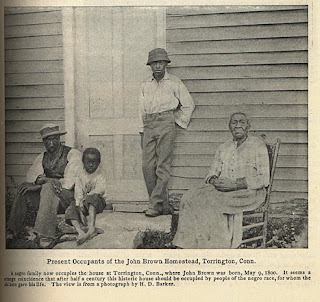 This photograph appeared in the April 1898 edition of Peterson's Magazine, noting the following under the cutline, which reads: "Present Occupants of the John Brown Homestead, Torrington, Conn."


A negro family now occupies the house at Torrington, Conn., where John Brown was born, May 9, 1800.  It seems a strange coincidence that after a half century this historic house should be occupied by people of the negro race, for whom the old hero gave his life.  The view is from a photograph by H. D. Barker. 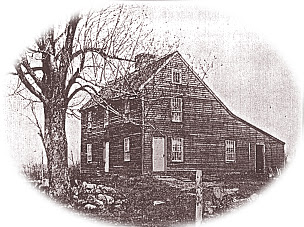 Certainly the Brown family would have been pleased that an African American family lived under their former roof.  Certainly it was not uncommon for black people to visit and stay under John Brown's roof during the days of his life--from little known, even forgotten, people to some of the most famous names in 19th century black history dined and rested in the home of John Brown.

The home in which John Brown was born was built in 1776 and purchased by Owen Brown in 1799.  Owen kept his family in this house until removing them to Connecticut's western reserve lands in Ohio in 1805, when John was obviously quite young.  The Torrington Brown homestead was made a landmark in 1901, but burned down in 1918.  I do not have sufficient information about the circumstances surrounding the fire and its origins, and whether it was occupied at the time.  One hopes that the fire was not the work of some or another hooded fraternity, the likes of which typically despise the memory of John Brown.