According to Kansas Watchdog TV (which posted the video below on YouTube), Grady Atwater [a friend of this blog!], Site Administrator of the John Brown Museum in Osawatomie, Kansas gives some history behind President Barack Obama's planned visit to Osawatomie, Kansas on Dec. 6, 2011. Some speculate Obama's visit has historical connections to the "New Nationalism" speech given by Theodore Roosevelt in Aug. 1910 (about 18 months after he left office). Roosevelt was in Osawatomie to dedicate the John Brown Memorial Park, which was an event attended by about 30,000. 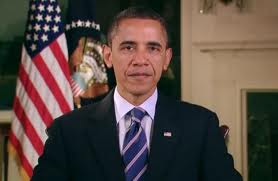 According to Aamer Madhani of USA Today, President Obama will follow the example of Teddy Roosevelt by traveling to Osawatomie, Kansas, to address the nation's economic situation.  He is scheduled to do so this Tuesday.  Madhani says that President Obama will "lay out the choice we face between a country in which too few do well while too many struggle to get by, and one where we're all in it together – where everyone engages in fair play, everyone does their fair share, and everyone gets a fair shot," the White House said in a statement announcing the Kansas address.  Teddy Roosevelt, the 26th President of the USA, famously traveled to Osawatomie in August 1910 to deliver an address that called for a "New Nationalism," where every American got "a square deal."  As Madhani says, this effort "comes as Obama battles with GOP lawmakers to extend and expand a payroll tax holiday that Congress enacted last year, which reduced the rate from 6.2% to 4.2%. . . . The trip to Kansas will give Obama an opportunity to bolster his push for a payroll tax extension and also another chance to push the White House narrative that the GOP is more concerned about the wealthy than the middle class."

Digging Up Some Notes--
Teddy Roosevelt on John Brown

Teddy Roosevelt went to Kansas to speak at the dedication of the John Brown Park at Osawatomie, Kansas, on August 30, 1910.  As a result of his apparently positive remarks about Brown, Roosevelt was criticized for his speech quickly prepared an article in The Outlook magazine entitled, "The Progressives, Past and Present" (Sept. 3, 1910), essentially an apologetic for his remarks in Kansas. 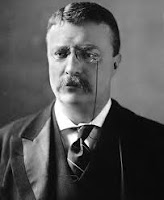 Referring to Kansas, Roosevelt wrote that the struggle there before the Civil War, though "heroic," and had a "dark and terrible side." Both sides of the war had men of "heroic valor" and "self devotion," he concluded.  Roosevelt then suggested that some of the same people who had honored John Brown and Lincoln either "shrink from or frantically denounce" those operating in the 20th century according to the same spirit as they did in their time (p. 19).  He wrote further that John Brown "stood for heroic valor, grim energy, fierce fidelity to high ideals," and was "one of the most striking figures" of the struggle against slavery:  "He did much in his life and more in his death; he embodied the inspiration of the men of his generation; his fate furnished the theme of the song which most stirred the hearts of the soldiers," he concluded (p. 20).


However, Roosevelt ultimately gave Lincoln the highest salutation, rendering him the hero of the nation: "the man to whom we owe most is, of course, Lincoln."  It was Lincoln, Roosevelt opined, who manifested "valor, energy, disinterestedness, idealism. . . and his also was that lofty and far-seeing wisdom which alone could make the valor, the disinterestedness, the energy, the idealism, of service to the Republic."  Roosevelt thus concluded that in modern concerns, we ought to "profit and welcome, and cooperate with the John Browns," yet remember that "the problems can really be solved only if we approach them in the spirit of Abraham Lincoln."  To further clarify his position to his critics, Roosevelt concluded that "John Brown prepared the way; but if the friends of freedom and union had surrendered themselves to his leadership, the cause of freedom and union would have been lost."  Indeed, Roosevelt went so far as to quote Lincoln's diminishing remarks about Brown from the 1860 Cooper Union speech Both Brown and Lincoln were examples to be studied, Roosevelt wrote, but ultimately Brown is a "warning" for the "extremists" among the progressive movement.  "The experience of John Brown illustrates the evil of the revolutionary short-cut to ultimate good ends" (p. 20). 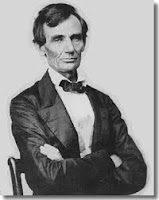 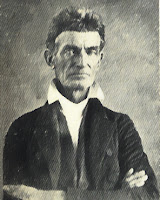 Roosevelt then underscores his self-identification as a "progressive," warning that failing to follow progressive policies will negate democracy.  Yet he expressed "concern when progressives act with heedless violence, or go so far and so fast as to invite reaction" (p. 20).  In fact, he drew a parallel between supposedly insurrectionary agenda of Brown with the desire to "destroy private wealth": "John Brown's notion that the evils of slavery could be cured by a slave insurrection was a delusion analogous to the delusions of those who expect to cure the evils of plutocracy by arousing the baser passions of workingmen against the rich in an endeavor at violent industrial revolution." (pp. 20-21).


Roosevelt likewise acknowledged that "plutocratic" abuses incite negative reactions, just as did the "insolence of the ultra pro-slavery men" before the Civil War.  Quoting Lincoln after the election of 1864, Roosevelt points out that human nature will not change, and men should reunite "having a common interest" in a "common effort to save our common country."  Lincoln, he wrote, tried to avoid placing "obstacles" in anyone's way, nor had he "willingly planted a thorn in any man's bosom."  Finally, Roosevelt reiterated Lincoln's call to reconciliation toward "a more substantial measure of equality in moral and physical well-being" among those "freed from the curse of Negro slavery" and sustained as undivided citizens by the efforts of Lincoln's generation.  He ponders the challenge of balancing freedom and equality, concluding that given man's shortcomings, "unrestricted individual liberty" would undermine "approximate equality," while "a rigid and absolute equality would imply the destruction of every shred of liberty" (p. 21).


In his article, Roosevelt sent a clear message that his "progressive" adventure in Osawatomie ought not to be misread or mistaken by the status quo.   He was opposed to any extreme of racism, exemplified in his day by blatant racism and neo-Confederate terrorism.  Yet he also emphasized that he was at heart Lincolnian in his reading of history, including the conclusion that John Brown was a skewed leader.  Though admirable to a degree, Roosevelt writes, Brown's recourse to violence and "revolution" disqualified him from being seen as a hero and leader to the nation, while Lincoln was to be praised for his conciliatory posture toward Southern whites.


Clearly, Roosevelt embraced and extended Lincoln's supposed "liberality" by advocating for freedom from slavery and "approximate equality" for blacks, but far more protecting white people's "liberty" by opposing "a rigid and absolute equality."  Roosevelt further misconstrued Brown's anti-slavery objective as insurrection, equating him with the most disdained extremists  of his own era.  In short, Roosevelt distinguished himself as a true heir to the Lincoln-Republican tradition of moderate, measured support of human rights and black freedom, and absolute devotion and protection of white supremacy and the capitalist prerogative in the United States.  His ham-handed treatment of Brown was not only an aspect of damage control to save his political career in the face of white society's disdain, but suggests the conflicted, double-minded manner that we have seen Brown handled recently, where he is at once a figure to be admired and an extremist to be disdained, a heroic opponent of injustice as well as a supposed terrorist, a failed leader, and self-made martyr!


It will be interesting to see if President Obama invokes John Brown in his Osawatomie address, and if so, what his remarks will entail--and if he likewise will afterward be forced to defend his remarks by reassuring the nation of his faithfulness to the "official" history of this nation.  Gary Wills had already pointed out Mr. Obama's willingness to cut loose his own pastor, the Rev. Jeremiah Wright, at the onset of his quest for the presidency.  That the President has chosen Osawatomie to respond in defense of his agenda is interesting, if not peculiar.  Is he insinuating his admiration of Brown, or just bringing his challenge to the front lines of a conservative and traditional arena, hoping to play it off with a little historical spice the way that Teddy Roosevelt did 101 years ago?
Posted by Louis A. DeCaro, Jr. . . at 11:09 PM

During the time of Pres. "Theodore Roosevelt he give importance on domestic program formed upon three basic ideas: conservation of natural resources, control of corporations, and consumer protection." http://en.wikipedia.org/wiki/Square_Deal . Well, let's hope that Pres. Obama will push a progressive agenda, if he really wish to follow Ted Roosevelt footsteps.