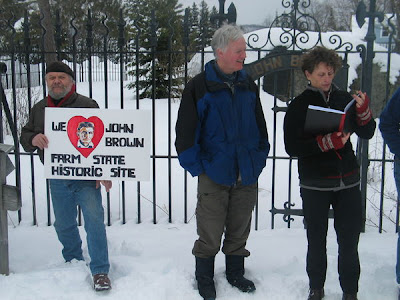 ABOVE: Martha Swan, director of John Brown Lives!, speaks at a rally Sunday to protest the John Brown Farm State Historic Site’s proposed closure. To her left is Naj Wikoff, and holding the sign is Vito Arste. (Enterprise photo — Nathan Brown)
Rallying to Save John Brown Farm
LAKE PLACID - John Brown has been a part of Lake Placid's history for more than 150 years, but a part few people outside of the area were aware of until it was highlighted in a series of events last year.
Just a couple months after the final ceremonies marking the 150th anniversary of the radical abolitionist's hanging and burial on his farm in North Elba, the state historic site is slated for closure, a possibility many of the people involved in last year's activities are organizing to help avoid.
"The lives that were lived here and the remains that lie buried under the snow make this hallowed ground," said Martha Swan at a rally on the farm to protest the closure Sunday afternoon. Swan is a teacher in Newcomb and director of the freedom education project, John Brown Lives!
Several historians attended the rally, and one, Amy Godine, said the site needs funding for interpreters to explain to people the ties between Brown, the abolitionist movement in general and Timbuctoo, a black settlement in the town of North Elba that Brown was part of.
"That's more work than we can get on the signs," Godine said.
North Elba town Supervisor Roby Politi has said the town could take over the farm if the state defunds it. It remains to be seen if the cuts make it to the final state budget, which is due to be passed April 1 but has been late more often than not in recent years.
The farm costs the state $40,000 a year to run, subtracting the $5,000 in revenue it generates - a modest amount given the site's historic significance, said Naj Wikoff. Many ordinary African Americans and civil rights leaders have visited the farm to gain inspiration, and Wikoff said the second meeting of the Niagara movement, which would evolve into the National Association for the Advancement of Colored People, was there.
Wikoff was one of the principal organizers of John Brown Coming Home, the series of events marking the 150th anniversary of Brown's death that culminated in a reenactment of his funeral.
Only 10 percent of the land of Mount Vernon, Pres. George Washington's home, and 50 percent of Monticello, Pres. Thomas Jefferson's home, is preserved, Wikoff said, making the John Brown Farm a rarity.
Caretaker Brendan Mills said he was organizing a friend's group for the farm; he had started organizing it before news of the proposed closure, and had planned for it to become active in the spring. Anyone interested can contact him at 523-3900.
---
Upcoming events
John Brown Day is May 8, and it will be marked at the farm this year with events focused on Haiti, including a benefit concert with local bands and a possible appearance by actor Danny Glover. Wikoff noted that one of the main boulevards in Port-au-Prince, Haiti's capital, is named after Brown, and the Haitians were inspired by his actions just as he was by their revolution.
"Juneteenth," or June 19, the anniversary of the day the slaves were officially declared free, will be marked by a talk from Scott Christianson, author of "Freeing Charles," a book about a slave's liberation in Troy a year before the Civil War started.
The 150th anniversary of the legal end of slavery in this country is coming up in five years, and Wikoff said he hopes the farm can be a part of it. He said slavery still exists, with 27 million people held in slavery worldwide, and that the farm and thinking about Brown's actions helps to draw attention to that.
"This is not about the past. This is very much about the present and the future."
Source: Nathan Brown, "Rallying to save John Brown farm," Adirondack Daily Enterprise on-line (Mar. 1, 2010)
Posted by Louis A. DeCaro, Jr. . . at 4:52 PM