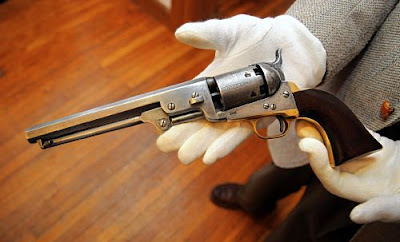 Robert Hassinger bid farewell on Tuesday to an old friend, a revolver whose craftsmanship, hallmarks and engraving led him on a fascinating quest and fed his lifelong passion for American history. "I like to do research," said the retired insurance investigator, who returned an 1851 Colt "Navy" revolver to the Chicago museum from which it was stolen 62 years ago.

Inside the third-floor boardroom of Soldiers & Sailors Memorial Hall & Museum in Oakland, he donned a pair of white gloves and carefully removed the gleaming revolver from a brown valise. "There's no pitting, no rust," Mr. Hassinger, 83, said as he showed it to Libby Mahoney, chief curator of the Chicago History Museum, who was visibly impressed by its excellent condition.

"I can't really believe that it's resurfaced. You're an extremely honest person," said Kathleen Plourd, the museum's collections director. At a gun show here in 1991, Mr. Hassinger traded an 1860 Army revolver for the earlier 1851 Colt model because its low serial number piqued his interest. He began researching its history, accumulating information in a neat binder.

While paging through Man at Arms magazine in 2001, the North Hills man read an article headlined "John Brown's Colt Navies." John Brown, a zealous abolitionist, led an ill-conceived [sic]* raid in 1859 on a U.S. military arsenal in Harpers Ferry, Va. Afterward, he was tried and hanged. Three of his sons also died in the anti-slavery movement. But Brown's third son, Owen, escaped from Harpers Ferry, fleeing to Canada and later returning to the United States. The article reported that Owen Brown's gun, stolen in 1948 from the Chicago History Museum, remained missing and had a serial number of 43156.

Mr. Hassinger knew his Colt revolver bore the initials O.B. on its backstrap. He figured the initials were those of the soldier who used the gun but was never able to match the letters to anyone, even after examining regiment rosters. On the day he got it, Mr. Hassinger showed the O.B. initials to his wife, joking, "This stands for 'Oh, boy, look at the neat gun I got.' "

As he matched the serial number to his revolver, he was electrified by the realization that he held Owen Brown's gun in his hand. Now, he faced a dilemma. "I didn't know what to do," he said. Mr. Hassinger consulted Ronald J. Erhart, a lawyer he knew from the Greater Pittsburgh Civil War Roundtable, who contacted the Chicago History Museum.

He got no response. "Maybe they were afraid I was after some money. I wanted some proof that it was stolen," Mr. Hassinger said. "No claim was made to the insurance company because they thought the gun wasn't worth anything." Mr. Hassinger then consulted Mike Kraus, curator of Soldiers & Sailors. A collector of Civil War artifacts since boyhood, Mr. Kraus believes the revolver is worth between $100,000 and $250,000. Through colleagues, Mr. Kraus reached Ms. Mahoney, Chicago History Museum's chief curator. "She was very interested in talking to me, especially when she heard the phrase, 'Owen Brown's pistol,' " Mr. Kraus recalled.

Ms. Mahoney sent documents showing the Chicago Historical Society accepted the revolver in the 1920s from Frank Logan, a collector of John Brown and Abraham Lincoln memorabilia. The packet included a newspaper account of the gun's theft. That proof satisfied Mr. Hassinger. "I realized that it belonged to them and that it had to go back," he said. But that didn't make it any easier for him to let go of his crown jewel. "This is what makes me want to get up in the morning. I would love to own this, display it and give talks on it. It's a symbol of the development of this country," Mr. Hassinger said.

Collectors, he said, don't really own their artifacts. "We are just custodians of them during our lifetime." He's sad because Chicago History Museum officials "couldn't guarantee that it would go on display." They also declined to reimburse him for the costs he incurred in acquiring and insuring the gun. "That was never a condition of returning it, [but] why couldn't they just hand me $500 or even $100?" he said.

According to Mr. Hassinger's research, the Army adopted this gun in 1855. The 1st and 2nd U.S. Cavalry were the first regiments to carry it. An image of ships engraved on the gun's cylinder portray a fictional encounter between the Texan and Mexican navies, leading soldiers to call it a "Navy" revolver. Samuel Colt, who invented an innovative revolver, ordered this model to be engraved to honor the Republic of Texas because the first revolver he produced in 1836 was later used by Texas Rangers in fighting Comanches. It was called a "belt pistol" because at that time, soldiers stuck it in their belts.

Mr. Hassinger has a theory on how the revolver wound up in Owen Brown's hands. His father purchased a number of Navy revolvers while living in Lawrence, Kan., from 1856-58. Owen Brown joined his father there, participating in conflicts to prevent that state from becoming a slave state. Kansas joined the Union as a free state in 1861.  "The soldier it was issued to may have lost it or may have deserted and sold it," Mr. Hassinger said, adding that the Army rarely recorded which guns were issued to specific soldiers. Or, in 1856, Owen Brown may have fought with a member of the U.S. Army at a Kansas town called Black Jack, and taken the gun from a soldier there. Black Jack is about 20 miles south of Lawrence, the scene of bloody skirmishes over slavery.

The right side of the gun's grip bears the initials of Robert Henry Kirkwood Whiteley, who headed the arsenal on Governor's Island in New York. His stamp meant that the gun had passed inspection and authorized payment for it.

Some time after 1859, Owen Brown returned from Canada to be near his sister, Ruth Brown Thompson, who lived in California. After he died in January 1889, his sister sold weapons that belonged to him and his father to Mr. Logan, who donated the weapons to the Chicago Historical Society.

There's a strong market for Civil War memorabilia. "Stolen property remains stolen property," said Mr. Erhart. "He could have sold it to somebody in the black market. He understood that he had a duty to return it to the rightful owner." Today, Mr. Erhart said, many museums emphasize World War II, and the Civil War's significance is missed by many Americans. "They wouldn't know Owen Brown from Charlie Brown."

Mr. Erhart hoped this gun is displayed, for the sake of Mr. Hassinger and history buffs like him. "It may very well never see the light of day again and that hurts him. He has no say in what they do."

* Editor’s note: The notion that the raid on Harper’s Ferry was “ill-conceived” is a prominent assumption among those who have not studied Brown’s plans sufficiently, such as the author of this article. Note that there are other errors in this article as well: Owen did not “join” his father in Kansas; to the contrary, John Brown “joined” his sons in the terrorist-infested territory in the fall of 1855, whereas Owen and several other brothers had gone to the territory in 1854 after their father’s partnership with Simon Perkins Jr. of Akron, Ohio, was mutually concluded. Likewise, the article incorrectly conveys the impression that after the Harper’s Ferry raid, Owen Brown fled to Canada. In fact, Owen found his way back to northwestern Pennsylvania (where he and his family had lived from 1826-35), and remained “hidden” there while gainfully employed for some time. Owen, who never married, lived for extended times with his brothers, John Brown Jr. and Jason, at their respective homes in Ohio, and later moved with Jason to California. Most of the Brown family moved west during the Civil War and were joined later by Henry and Ruth (Brown) Thompson, who settled in Pasadena, Calif. Owen eventually joined his older sister Ruth and brother-in-law Henry there. The history of John Brown’s guns has been a subject far more explored by gun collectors and enthusiasts than by historians. My own assumption is that Owen’s “navy” revolver was among two hundred revolvers that John Brown received from T. W. Carter, Chicopee Falls, Mass., an arms manufacturer with whom he had corresponded as early as 1856 in expression of anxiety over the rise of pro-slavery terrorism in the Territory. According to correspondence held in the Kansas State Historical Society, two hundred revolvers were shipped to Brown via Iowa City, Ia., in May 1857. Brown did not pay for these guns; the bill for the weapons was sent to George Stearns, the prosperous New England anti-slavery businessman who shortly became one of Brown’s “Secret Six” supporters. [See T. W. Carter to Capt. John Brown, May 25, 1857, John Brown Collection #299, Box 1, Folder 23, Kansas State Historical Society.]--LD
Posted by Louis A. DeCaro, Jr. . . at 11:15 AM