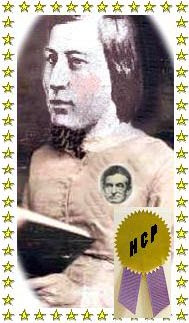 Jim and Lisa Gilbert, Chatham, Ontario, Win the Henry Clay Pate Award
The board of directors of this blog, John Brown the Abolitionist, are happy to announce that Jim and Lisa Gilbert, Ontario, Canada, are the first recipients of the "Henry Clay Pate Award" for their consistent and unwavering devotion to the demeaning and misrepresentation of John Brown. The Gilberts, self-professed "local historians," have written a number of articles for the Chatham Daily News about John Brown's activities there in 1858, along with a recent article about black leader, Martin Delany, in which they once more found opportunity to publish their determined screed that Brown's plans were "foolish, dangerous, and hopelessly misguided."
The Henry Clay Pate Award is named for pro-slavery advocate Pate (1832-64), a Virginian who was captured in Kansas by John Brown in 1856, and afterward published a screed that misrepresented the fact that he had been taken by Brown and a considerably smaller group of devoted free state warriors. Pate subsequently traveled back and forth between Virginia and the Kansas territory to raise money for the pro-slavery side. After Brown was captured at Harper's Ferry in 1859, Pate rushed to visit him in his Charlestown jail cell in order to gloat. With the pro-slavery side's failure in Kansas, by 1860 Pate had settled back in the Old Dominion. When the great slave masters' rebellion exploded on a national scale in 1861, he joined the Confederate army to support the cause of broad scale African enslavement and white supremacy. Arrogant and brash, Pate was disliked by Confederate officers, including J.E.B. Stuart. In May 1864, Pate took a shiny, hot northern bullet in the head during the Battle of Yellow Tavern (Virginia). Buried by his Confederate colleagues, thus he died as he had lived, on the wrong side of history.
The Award named for Pate is inspired by his determination to misrepresent John Brown by less than factual means and his opportunism in taking advantage of Brown's imprisonment to further disdain him. Congratulations Jim and Lisa.
Posted by Louis A. DeCaro, Jr. . . at 12:13 PM