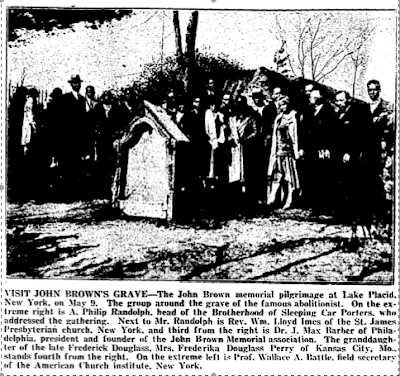 (1930)
The Failure of Historical Memory: A Black Governor and Black Clergy Leaders Don't Seem to Mind the Idea of Closing John Brown's Farm
It is most unfortunate that David Patterson came into the governor's seat of the State of New York, not only as a result of the tragic downfall of former Governor Spitzer, but that he should take the seat of power at a time of increasing financial crisis for the state. One must sympathize with Governor Patterson, who inherited this office when New York was in such poor economic condition. One must also consider the pressures and burdens of his position before judging him too harshly.
On the other hand, there is something particularly unfortunate in the fact that an African American political leader in New York would so easily put John Brown's Farm, an official historic site, in jeopardy in an attempt to manage the state's current financial crisis. Frankly, I wonder if Governor Patterson would have considered closing down a historic site pertaining to a prominent black leader, especially one that was fairly inexpensive to operate as is the John Brown Farm site. I seriously doubt that Governor Patterson would do so, and the fact that his intention of closing down the John Brown Farm has met with little or no protest from the black community is indicative of an unfortunate shift in historical memory.
There was a time when blacks not only knew John Brown as a vital figure in the history of African American struggle, but considered him a heroic figure. There was a time when black churches, organizations, and pilgrims would make their way to the John Brown Farm to visit the graves of Old Brown, his sons, and raiders. Had the governor of the state then decided to close down the John Brown Farm for budget reasons, the hue and cry that would have arisen from the black community would have been deafening and protest most certainly would have arisen across the state, if not across the nation. Those days are quite evidently gone.
Governor Patterson's plan to close down the John Brown Farm (among other state parks and historic sites) reflects the man's own indifference to the legacy of Brown and its historic meaning to the black community. For even if Governor Patterson really had to close down the John Brown Farm site (and we really do not think it is necessary), at least one would have expected some words of regret, some sign of consciousness as to the historic value of the John Brown Farm to all of New Yorkers, but especially African American New Yorkers. Instead, Governor Patterson apparently has said nothing, not even a politician's note of regret. He gives the impression that John Brown's Farm might as well as be Johnny Appleseed's farm for all he cares.
Similarly, none of the "big name" black clergy leaders in New York State or nation-wide have expressed even a sentiment of regret over the Governor's plan to shut down the Brown farm. This is particularly true of the leading Reverends, Calvin Butts, Al Sharpton, Floyd Flake, and Alfonse Bernard, and others, not even the Baptist Minister's Conference of Greater New York -- none of them have even gone on record even to express regret over the Governor's strategy as it touches the John Brown Farm.
Of course, we understand that 150 years have lapsed and during that time, African American leaders have arisen in the continuing struggle against injustice and white supremacy in all its forms. Time stands still for no one, not even the most heroic figures in history. One should not expect black people in the 21st century to consider John Brown a "front burner" historical figure when there are so many black leaders to remember. Nor would one expect African American youth to be any more diligent than their counterparts in other communities, all of whom are apparently more concerned with the fashion and celebrity culture of our day than the legacies of freedom.
But none of this lessens the sad note of failure of historical memory as it pertains to blacks and John Brown the abolitionist. Had he become obsolete because of the disappearance of racism and the triumph of justice in the land, one could at least take comfort in knowing that a society without racism may not need to remember the heroes of freedom. But we have hardly arrived as a nation, blacks still deal with systemic racism and stubborn cultural and social prejudices against Africanity are so deeply embedded in this culture. This is why we still need to remember John Brown, Frederick Douglass, Harriet Tubman, Sojourner Truth, Martin Delany, David Walker, Gerrit Smith, William Lloyd Garrison, and many others. Their struggle --often to the death or nearly so--is our inheritance, the legacy that this nation can best be proud of, can best find as a paradigm upon which to work in the present.
No one is asking black leaders to forego their community's social, cultural, and political priorities. No one would make the unreasonable and narcissistic request that John Brown somehow be elevated and prioritized in black memory. There are many men and women, not a few of Brown's own contemporaries, who equally deserve to be remembered and saluted. But if the judgment of a myriad black forefathers and foremothers was correct, then John Brown was a friend worth remembering. Certainly we must credit New York State Senator Kevin S. Parker for presenting a resolution to preserve the John Brown Farm. Parker and those working with him have shown not only a great sense of historical sensitivity but bravery in standing up for the John Brown Farm in the absence of popular and moral leadership from other black leaders in the state, especially from the church.
I once heard a proverb, "An African never forgets." If there is any truth in that statement, then the ancestors have not forgotten Old John Brown. Perhaps they will call their descendants to look back . . . and remember.

Louis, I'm totally sick and angry about this. If not for John Brown, Patterson would not even be in power right now. Alot of blacks today, do not know anything about history, much less the name John Brown. John Brown is not really studied in our school system and people are too lazy to research these people on their own and blacks have been lazy about talking about him to their children. We are a very shortsighted people (yes, I'm black)and if it's not about Martin Luther King, the majority of people of my race don't know and don't care. That is sad because without John Brown, there would've been no MLK. I educate as many people as possible about Mr. Brown. John Brown and Harriet Tubman are my heroes. Most blacks are used to being told by whites who is important in history and who is not and frankly because of this intellectual laziness, many blacks have forgotten John. Since whites have vilified him and downplayed him through history,many blacks don't fight for his legacy. I really want to do whatever I can do to keep this open. I will donate, I'll move to NY and volunteer to work there. Do I need to deluge Patterson's office with call?? What can I do??

Patterson is an incompetent. You're right, I can't imagine Patterson allowing a black landmark to close this way. I can't stand him and cannot wait until he leaves office.

Thanks for your comments and your concern. I suppose "it is what it is." As you observe, the problem is bigger than just forgetting JB, it's forgetting a lot of folks who lived and died for freedom. But that's the world we live in. I only wrote this piece because it struck me that 100 -- even 50 -- years ago, the issue of closing the farm would have aroused so much concern, and mainly from blacks. Of course, JB sustains a loyal remnant of black friends and perhaps I did them (including you) a disservice by not pointing that out. Still, it just ain't what it used to be and there's no use getting sick about it. You are doing your part and I try to do mine, and others try to keep people in remembrance of the important things. Thanks for following this blog and for remembering with heart and mind. Best wishes!--LD