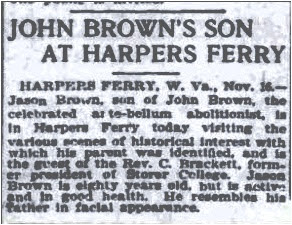 Jason Brown (1823-1912), was the second son of John Brown and Dianthe Lusk Brown, married to Ellen Sherbondy (1847).  He was known in the family as gentle, mild-mannered, and very sensitive.  He refused to participate in "the Pottawatomie killings," a preemptive counter-terrorist assault led by his father in Kansas in 1856.  However, he admitted to sharpening the swords that were used to kill the five conspirators (Doyles, Sherman, Wilkinson) who were known to have been directly involved in a plot to aid invading pro-slavery thugs with the intention of directing an attack on the Browns because of their adamant abolitionist stance in the territory.  Although Jason fought by his father's side in subsequent opposition to pro-slavery forces in Kansas, he returned to Ohio and thereafter refused to participate in any further militant actions against slavery.  Jason did not follow his father to Virginia, and was in Ohio at the time of the Harper's Ferry raid.  His son Charles later remembered how Jason wept at the news of his father's hanging in Virginia.  Subsequently, Jason lived for a time in California with his brother Owen.  In correspondence, he stated that he had lost many of his personal possessions--including his father's valuable correspondence--in a number of unfortunate house fires, including the burning of his home by pro-slavery thugs prior to his return to the east.  The brief article above is found in The Washington Times [Washington, D.C.], November 16, 1909, page 3.  It interestingly notes that Jason finally went to Harper's Ferry, also visiting Storer College, an African American institution then in operation.  The article says Jason was eighty-years-old, but actually he was eighty-six-years-old at the time.