Abagond Writes--
Current Arguments about the History of U.S. Slavery 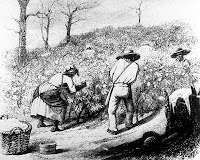 There are still white people in America who try to defend or excuse slavery - almost 150 years after the slaves were freed. Instead of simply condemning it for the evil that it was, they say stuff like this:

"Africans sold their own people as slaves."
"Africans are still selling slaves."
"Arab traders sold slaves too."
"Slavery goes back thousands of years."
"Most human societies have practised slavery."
"It was the times!"
"The important thing to remember is that whites stopped slavery!"

Playing down its benefits to whites:

"Slavery did not make economic sense."
"My family never owned slaves."
"That was Ancient History."
"Whites got to where they are by their own hard work."

Playing up its benefits to blacks:

"Blacks are better off in America than in Africa."
"Africans were savages."
getting people to shut up:
"You are living in the past."
"Get over it!"

I did posts on some of these, but here are some general points to keep in mind:

1. Slavery is just flat-out evil. Why excuse it?

2. Africa is not a country - Africans were not "selling their own" but their enemies. As it was, most African societies did not sell slaves.

3. Western slavery was worse than African slavery: it was based on race, it lasted for life and it was on a much bigger scale. Many were worked to death, like in Haiti and Barbados. Whites willingly sold their own children as slaves. This was not "what most human societies do".

4. You do not get credit for stopping what you should not have been doing in the first place.

5. "Everyone does it" does not make it right. Besides, since when did White Americans regard Arabs or Africans as a moral example to follow?

6. White Americans knew perfectly well it was wrong. Racism, in fact, grew out of their need to excuse their actions so they could hold onto their self-image as good people. That is why, to this day, their prejudice against blacks is so much stronger than against anyone else, even against foreigners, even against black foreigners.

7. Of course slavery made economic sense. How else could it have lasted hundreds of years? In the late 1700s, 80% of Britain's overseas trade depended on slavery. It was one of the main ways White America got so rich so fast. Working-class whites are still wealthier on average than even middle-class blacks.

So why all the excuses?

First, because part of their sense of self worth is built on being white and how whites are better than everyone else, particularly blacks. A view that does not stand up to an honest look at their past.

Second, because, as Edward Ball put it in Slaves in the Family (1998): "To live with the advantages of white skin in America is to benefit from the old slave system."