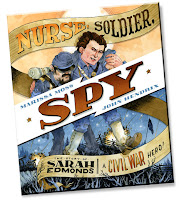 Nurse tells the true tale of teenager Sarah Emma Edmonds, who dressed as a man and enlisted in the Union Army under the name Frank Thompson. Thompson rescued the wounded on battlefields, nursed their wounds and served as a spy, disguising herself as a slave to get behind Confederate lines.

After illustrating Abe Lincoln Crossing a Creek: A Tall Thin Tale in 2008 and writing and illustrating the acclaimed John Brown: His Fight for Freedom in 2009, Hendrix, of University City, Mo., was offered Nurse, Soldier, Spy just in time for the 150th anniversary of the Civil War's start. He says he was a little concerned that he was getting stereotyped as "a Civil War nut."

"My first reaction was, oh man, do I want to do another Civil War work?" he says. "But I'd just finished 'John Brown,' and I'd done a lot of research on the era - I had my head in it. I like history. I probably like the Civil War more than I'd like to admit. It worked out well."  His artwork complements Marissa Moss' story of Edmonds, one of hundreds of women who dressed as men on both sides in the war, often serving with courage and distinction. But Edmonds was the only one to receive an honorable discharge and a pension.

Hendrix found it a sympathetic story.  "She took great risks for really no personal gain, other than giving meaning to her life and her work," he says.

Hendrix, 34, is a St. Louis native who grew up in Des Peres, Mo. After graduating from the University of Kansas, he got his master's of fine arts degree and a lot of valuable experience at New York City's School of Visual Arts.

Hendrix and his wife, Andrea, whom he met in high school, have two children: Jack, 5, and Annie, 2. He does covers for magazines ranging from Sports Illustrated to Christianity Today, op-ed art for The New York Times and illustrations for publications ranging from PC World to Runner's World.

Hendrix's style is audacious and colorful. Nurse, Soldier, Spy uses the distinctive typography of the period to make its most important points: When "Frank" is asked if she'll spy, the words "I'm your man!" are as big and bold as a recruiting poster.

The figures are a little cartoonish, with disproportionately large heads. But "that's my editorial style," Hendrix says. "I try to draw expressively, not photorealistically. (Frank) will sort of change scales, depending on her role" in a given illustration. 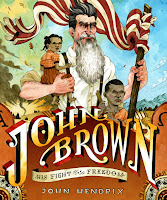 He used the same style for "John Brown" and "Abe Lincoln."

One of his favorite jobs is doing the visual research, tracking down the details of uniforms and weaponry. In "John Brown," the abolitionist holds the rifle he actually had at the Harper's Ferry raid. Uniforms, he says, are harder. The armies "started out really regimented. As things progressed, they didn't have the resources to keep things together. By the end, the Confederates looked really awful."

Drawing Sarah/Frank was a tough assignment: She had to look like a tomboy, like a tough kid, but she needed some womanly touches. She was "a really interesting character. We only have three pictures of her from the era. In two of them, she looks like Frank. In one, she's dressed like a woman. She could pass as a young boy, which she did. She had small feet. She probably wore extra socks."

For his next book, Hendrix has left behind the Civil War, if not the 19th century. A Boy Called Dickens is due early next year. Marking the 200th anniversary of Charles Dickens' birth, it will explore the sometimes dark boyhood of one of the most successful authors of all time.

"There's so much of his experiences in his work," says Hendrix, who's working in a heavier style to capture the grim settings of debtors prisons and factories. "I think it makes a good read."
The books are more than just good reads, though.

"Why do we value the things that we value?" he asks. "When is it a good time to make a choice that is difficult? I don't see these books as just history books. They deal with moral ambiguity."