In the News:
John Brown and Optical Character Recognition

The New York Times (March 28) features a story in the science section about John Brown’s speech before the Virginia court that sentenced him to death on November 2, 1859. The article, written by Ray Gugliotta, points out how the Times hired a Pittsburgh-based technology firm to put the newspaper archive into a searchable data base, a seven-year project that finally will be completed at the end of 2011. 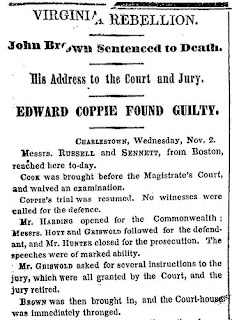 As an example of this technological development, Gugliotta points out how Brown’s speech to the court was originally published in its entirety in the Times on the following day, November 3, 1859. Of course, the original print text shows “print unevenness,” smudges, and variations in how the same letter appeared—none of which prevented the human eye from reading with ease. The same is not true for optical character recognition (OCR), which could not read the text without making considerable confusion and error.

Gugliotta follows convention in stating that Brown’s “defiant yet humble words transformed” him from a man notorious “for the grisly murders of pro-slavery settlers in Kansas, into a martyr for the anti-slavery cause.” This is only partially true. First, Brown’s leadership in the Pottawatomie killings of 1856 were not known widely and therefore he was not “notorious” in the eyes of the North, but rather something of a heroic figure to the free state cause. Second, although Brown’s speech to the court made a great impact in winning the sympathy of the North at the time, his speech was actually the beginning of his impact in print, since his correspondence was published throughout the months of November and well into December. Brown’s letters to friends, family, and strangers propelled him to the zenith of his popularity as a martyr figure following the dynamic “life off” provided by his speech. Nor did the sum of Brown’s words mark his own transformation as much as they did the transformation of the North itself. It is a hackneyed assumption that Brown changed, or that he somehow manufactured his own transformation—or “reinvented himself.” This is to read him wrongly. The man who gave the speech in court and the man who wrote many letters expressing his convictions about slavery and willingness to die for the cause of freedom, was the same man who had herded sheep in Ohio, cleared vast acres in Pennsylvania, opposed the abuses of wool manufacturers in New England, and armed blacks in opposition to the Fugitive Slave Law. It was not Brown who changed, but rather the nation that caught only a glimpse of his brilliant vision.

As the great Frederick Douglass later wrote: “John Brown, Saw Slavery through no mist or cloud, but in a light of infinite brightness, which left no one of its ten thousand horrors concealed."

This was no self-made martyr or contrived reinvention. It was the final and fullest stage of Brown’s sojourn to be sure. Yet he was not transformed; it was his words that transformed the North, and helped to drive the Slave South to the brink of Pharaoh’s desperate lust to keep his slaves and even expand the territory of slavery.

Some day, if they are well educated, school children will prefer memorizing Brown’s speech to the court before they learn Lincoln’s Gettysburg Address. And if they download it from the digitized New York Times, a paper that was neither a friend to Brown nor to the slave, it will be all the better.
Posted by Louis A. DeCaro, Jr. . . at 11:59 AM

here's a great upcoming event, "A New Home for Liberty" in Morgantown WV on April 6, 2011. see details at www.jrclifford.org