From the Field--
INTERPRETING HARPERS FERRY:
THE VAGRANT MUSINGS OF A JOHN BROWN RESEARCHER

I try to visit Harpers Ferry National Historic Park every April, and this year was no exception. Having been a student of John Brown and his associates for over three decades, I must admit that I am a rather eccentric brand of tourist. As I roam the site of Brown’s celebrated 1859 raid, my overactive imagination is filled with visions of raiders, their Sharps carbines held beneath heavy woolen shawls; and of panicked townspeople, their seemingly placid anthill poked by the unknown. Angry shots still seem to echo from the surrounding rocky heights.

But I also feel as though I am one of the few visitors cultivating such singular thoughts. So it was this year. It was a cold, damp and threatening day – much the same as it was in that long-ago October when John Brown’s Provisional Army of the United States came to seize the armory and free a people.
The lower town was eerily quiet on such an inclement day. A very few tourists sauntered aimlessly about. I was the sole person viewing the John Brown exhibit hall on Shenandoah Street. The narrated account of the raid resounded loudly as I gazed at the relics – a section of the armory fence - Brown’s Bible - the eagle-hilted broadsword, said to have been wielded on the Potawatomie. Nothing seems to have changed.

And that has been a problem for me. Nothing really seems to change at Harpers Ferry National Historic Park. Yes, the trinket, hot dog and ice cream establishments still endure on High and Potomac Streets. But they are outside of the park boundary. The commuter trains still stop at the renovated station, disgorging battalions of shirts and ties, fresh from their techno-offices east of South Mountain. They head for their stylish homes in the newly constructed burbs of Charles Town – the site of John Brown’s trial and execution. Charles Town has certainly changed. Even the venerable Charles Town racetrack now holds the appellation of the “Hollywood Casino.”

And then there is the Hilltop House, my long accustomed domicile while visiting Harpers Ferry. This classic old railroad hotel, perched precariously on a bluff dominating the Potomac, is in its death throes. I loved staying there. Once grand, it was the creaky archetype of the tourist/traveling salesman hostelry. Abandoned by developers of high expectations, a portion of its stone façade has literally collapsed. Plastic sheeting covers the gaping hole. A chain link fence surrounds the entire property, barring the curious and the daring. The instability of the structure thwarted all plans of restoration. Perhaps it is for the better, for one may as well teach table manners to John Brown’s sheep, as gentrify that noble old pile.

Is this an anomaly? Or could it be a metaphor for Harpers Ferry?

The park itself maintains an air of underfundedness and overuse. Shiny new shuttle buses convey patrons from the now distant “Visitor’s Center,” but upon their arrival they are met with what I consider a vague sense of seediness. Scaffolding covers the occasional storefront, awaiting desultory rehabilation work. Large canvas tents cover sections of open ground, perhaps awaiting special weekend events.

The town’s aura is not that of an immensely significant historic site. It is that of a family recreational getaway – or a way station on the Appalachian Trail – or an outdoor classroom, where regiments of schoolchildren are set to drilling with wooden sticks, in lieu of muskets.

I retreated to High Street and the “Secret Six Tavern,” where one can purchase $20 t-shirts emblazoned with the bearded image of John Brown. Over fries and a tall glass of oatmeal stout (very good, by the way), I pondered my day’s impressions. This establishment is named for the New England half dozen moral/financial supporters of Brown’s antislavery cause – vicarious fighters for black freedom all. Framed images of three of them, Franklin B. Sanborn, George Luther Stearns and Samuel Gridley Howe, literally loomed over my table. A number of photographs of the “Old Man,” along with a handful of rifles, adorned other walls of the room.

Before the stout muddled my senses, I returned to the topic that always seems to concern me during my annual visits – that of historical interpretation at Harpers Ferry. The National Park Service has chosen to highlight a diverse set of topics relating to the town: gunmaking – its role as supply base for the Lewis and Clark Expedition – the Civil War – natural history -- Storer College and the Niagara Movement – and, oh yeah, John Brown’s Raid.

I have always thought that Brown’s raid is purposely minimized for unspoken reasons – be they political correctness in regard to divisive issues such as race and violence; or long outdated efforts toward sectional reconciliation.

As I twirled my beer, I was strongly tempted to scream out: “It’s John Brown, stupid!! The National Park Service might as well interpret Gettysburg, not for the battle fought there and its far-reaching implications, but rather, for peach raising or its unique geological formations! The enduring significance of Harpers Ferry is JOHN BROWN!

If I am interested in gunmaking, I will go to Springfield, Massachusetts or Ithaca, New York. Lewis and Clark? I will travel the Missouri River to its three forks in Montana, and then cross Lolo Pass to the Clearwater beyond. Civil War? Sharpsburg and Gettysburg are a short drive away. The Appalachian Trail runs from Maine to Georgia.

The Storer College/black history connection is indeed relevant – to John Brown. All is symbolic in regard to the fact that Brown’s Provisional Army marched to the Ferry on that October night in 1859. The creation of Storer – the 1881 speech of Frederick Douglass – DuBois’ 1906 Niagara meeting – must all be seen through the prism of John Brown’s raid. The destination of the intensely moving, barefoot march of the Niagarans? John Brown’s Fort, of course.

I repeat, the enduring significance of Harpers Ferry is John Brown. And this should be freely and openly stated. Interpreters need to more adequately express the supreme importance, and the far-reaching effects, of those events which transpired at Harpers Ferry – events which led directly to the spillage of so much American blood and the end to that “peculiar” stain upon our nation’s fabric.

I will be back to the Ferry next April.

*Scott Wolfe is the Historical Librarian of the Galena, Illinois, Public Library District.  We are pleased to introduce him as a correspondent and contributor, noting his many years of grassroots research on John Brown, the Harper's Ferry raiders, and related themes.
_______


"What makes you the authority on the significance of Harpers Ferry? NPS sites are for all Americans - they have relevance and meaning for all - it is up to the individual visitor him/herself to find their own significance. I don't know how you can 'hold' the higher ground that your significance is better than the rest."
_______ 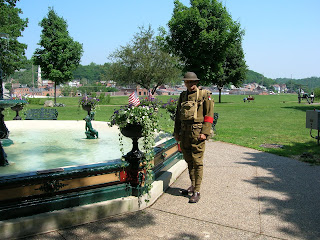 
Scott Wolfe replies:
Oh no! I am already under attack! I have taken quick action, mining my front yard and unrolling spools of razor wire in my driveway. I have also hired Edwin Coppoc and Charles Plummer Tidd as bodyguards.
I don't recollect stating that I am an "authority," nor that my humble opinions are "better than the rest." I was merely stating my personal views...which every correspondent certainly has the right to do. Harpers Ferry was also about FREEDOM.
P.S. I attach another image of myself. Heavily armed. Perhaps this will discourage the unwary.
Editor's comment: Mr. Dinkelaker's reactionary statement has little merit.  Obviously, Harper's Ferry has other historical and scenic attributes that might be of interest to tourists and local visitors, including its Civil War history.  But even a practical reading of the town would lead us to conclude that the John Brown raid made Harper's Ferry what it is today.  Mr. Dinkelaker should consider what percentage of people over the past century would even have visited Harper's Ferry had Brown not endeavored to launch his freedom movement there in 1859.  Only a fraction.  Furthermore, the argument that people will find "their own significance" is true only in the most meager sense: people like what they like.  But in reality, the significance of Harper's Ferry is defined by the political and social realities that brought it to the foreground in our nation's history.  As such, the John Brown raid--even more than the subsequent Civil War episodes there--gives Harper's Ferry its quintessential meaning and value as a historical site.  To say otherwise is to suggests sterility or ignorance of understanding--or Dinkelaker's reaction may simply be a veiled expression of prejudice against John Brown.   Lastly, Mr. Wolfe writes as an "authority" in the most obvious sense of the term: he has devoted years and miles to research and reflect upon Harper's Ferry's meaning and place in U.S. history, and his interpretation carries far more weight than the next ten thousand tourists who pass through that town--and from what I've heard, probably more weight than the hackneyed historical interpretation from NPS staff too.
Posted by Louis A. DeCaro, Jr. . . at 9:05 AM