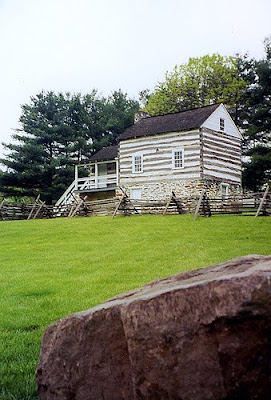 SHARPSBURG — Some historians say the Civil War began in the small Sharpsburg farmhouse where abolitionist John Brown planned his historic raid on Harpers Ferry in 1859, said Sprigg Lynn, who owns the property with his father.

On Saturday and Sunday, the public was invited to tour the Kennedy Farmhouse on Chestnut Grove Road during an open house to commemorate the 150th anniversary of John Brown’s stay at the home where he began planning and staging the failed raid. Dennis Frye, chief historian for Harpers Ferry National Historical Park and head of the committee overseeing the John Brown commemoration in four states, said about 300 people attended the event Saturday and another 200 were expected Sunday. In addition to tours, led by the property owner, South “Captain” Lynn of Montgomery County, Md., visitors also were able to participate in children’s activities, listen to music and have refreshments.

On June 30, 1859, Brown spent the night in Hagerstown, at the former hotel that is now the site of the University System of Maryland at Hagerstown, Frye said. Then, in the first week of July, Brown rented the Kennedy Farmhouse, where he stayed until Oct. 16, 1859, before the famous raid. “Here (at the Kennedy Farmhouse), Brown hid his army, secured his weapons and made his plans to attack Harpers Ferry,” Frye said.

A little more than one year after the raid, the American Civil War began.

On Saturday officials unveiled a new marker, making the Kennedy Farmhouse an official stop on the Maryland Civil War Trail. The federal government also has declared it a National Historic Landmark.

For additional information about activities commemorating the 150th anniversary of John Brown’s raid on Harpers Ferry, go to www.johnbrownraid.org.
Posted by Louis A. DeCaro, Jr. . . at 7:29 PM