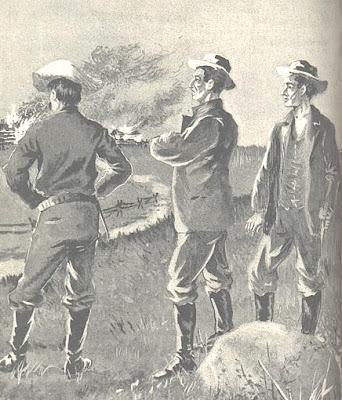 John Brown and Ely Moore: A Kansas Debate Explained
by Grady Atwater. The Osawatomie Grapic [Osawatomie, Kan.] on-line, July 8, 2009
John Brown was a dedicated foe of slavery and regarded anyone who sided with or was neutral on the slavery issue with suspicion. Ely Moore Jr. was neutral in the fight over slavery and enforced federal government Indian policy in the area, which made him an ally of a proslavery federal government in Brown’s eyes and, therefore, an enemy.
Moore and Brown had an antagonistic relationship, and Moore’s account of Brown’s conduct in Kansas Territory reveals the disdain the men had for each other. Moore reported in Collections of the Kansas State Historical Society, 1911-1912 that “in the late summer or early fall of 1855, an evil bird swooped down upon us, arrogantly invading our territory. True, the bird assumed the form of a man, but carried a heart of stone that could not be mellowed save by the flow of human blood. The noxious visant, though by some crowned as a saint and a martyr, was but a dangerous paranoiac at large — John Brown.”
Moore’s opposition to Brown’s abolitionist crusade in Kansas Territory was compounded by Brown’s refusal to allow him and a companion to enter his camp Dec. 24-25, 1855. Brown’s reaction angered Moore, for Moore had rescued him in November 1855 from a near-drowning and freezing death in Rabbit Creek. However, Brown was an abolitionist guerilla fighter, and the last thing he wanted was to have a federal government agent in his camp who could report to authorities how many men he had and his whereabouts.
Moore firmly stated his opinion of Brown, saying “the adoration which many entertain for John Brown and his acts here and elsewhere is incomprehensible. Even the State Historical Society insults the heirs of many good and brave Kansans by placing on the walls of the honorable secretaries’ office the portrait of John Brown, surrounded by the portraits of those gallant men who placed Kansas on her sturdy feet, even giving up their gifted lives in so doing.”
Brown is a deeply controversial character in American and world history. His actions in Kansas Territory and his raid in Harpers Ferry, Va., helped to spark the Civil War. The reality that his actions in and around Osawatomie were a part of changing U.S. history made Osawatomie history of national and international importance.
However, there is another aspect of Brown’s abolitionist crusade that makes him and Osawatomie historically important. He has become a philosophical example when people nationally and internationally discuss the issue of ideologically-based violence. Historians and others analyze Brown’s actions in Kansas, studying his motives and the ramifications of his abolitionist crusade.
Brown inspires debate about actions that began when he battled proslavery forces during the Bleeding Kansas period and his raid at Harpers Ferry. The debate continues in the present and shows no sign of fading. Brown’s actions in and around Osawatomie are a part of that discussion, and the controversy over Brown puts Osawatomie on the historical map, which brings visitors to the community from all over the nation and the world.
------------------
— Grady Atwater is site administrator at the John Brown State Historic Site in Osawatomie, Kansas. His knowledgeable and thoughtful articles on John Brown are always appreciated by the readers of this blog.--LD
Posted by Louis A. DeCaro, Jr. . . at 12:41 AM