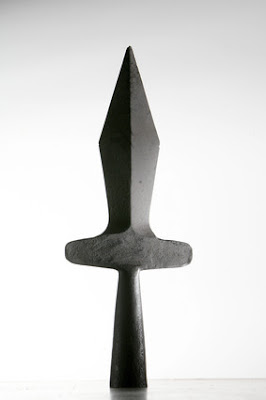 Abolitionist John Brown's Pikes Were Made to Order in Canton, Connecticut
by Rinker Buck, The Hartford Courant (August 2, 2009)
CANTON — Residents of this town can be forgiven if they've never heard of a particularly grisly and medieval-looking weapon produced here that changed American history. But that situation that could change as conferences and memorial events this year observe the 150th anniversary of John Brown's raid in Harper's Ferry, Va., in October 1859.
In the late winter of 1857, Brown, an abolitionist whose family originally settled in Canton, stopped in the Collinsville section while on a fundraising tour of the Northeast. Brown and his supporters had just spent two years fighting a series of pitched battles in "Bleeding Kansas," against pro-slavery forces. While relaxing and telling stories one morning at the Collinsville pharmacy, Brown met Charles Blair, manager of the Collins Co., later known as the Collins Axe Co., which by the end of the century would become one of the world's largest edge tool and farm implement manufacturers.
Brown pulled from his boot a fearsome-looking 8-inch dirk, or pike, which he said he had seized from pro-slavery fighter H.C. Pate at the Battle of Black Jack in Kansas. Fixed to the end of a 6-foot pole, Brown said, the pikes would make an excellent defensive weapon for free-soil settlers in Kansas. Blair agreed to have the Collins Co. make 1,000 pikes, affixed to cured wooden handles, for $1 apiece.
Brown promptly disappeared after paying Blair for about half of the order, and then suddenly reappeared in the summer of 1859 with enough cash to pay for the rest of his pikes. By then, Brown and about 20 radical abolitionists were finishing plans for a raid on the federal arsenal in Harper's Ferry, which they hoped would incite a slave insurrection in the South. The pikes would be used to arm slaves on Virginia plantations, though Brown was evasive when Blair asked why he needed them.
By that time, the Collins Co. was busy, and arranged to have the second half of the order completed by another ironworks, C. Hart & Son of the Unionville section of Farmington. In the late summer of 1859, the completed order of pikes was shipped in unmarked crates, ending up at the farm in Sharpsburg, Md., that Brown and his co-conspirators were using as a staging ground for their raid.
Except for one pike that Brown carried on the Oct. 16 raid itself, none of the Collinsville weapons ever made it into the hands of slaves. After Brown's raid was quickly thwarted by federal forces, about half of the pikes were found in a large farm wagon that Brown's party had sneaked into Harper's Ferry. The other half were found at the Sharpsburg farmhouse.
Brown, who was severely injured when the arsenal was retaken by federal forces, was tried for treason and then hanged in Charles Town, Va. — now West Virginia — in December 1859.
But the Connecticut pikes and their intended use in arming slaves became a potent symbol for outraged Southerners during the inflammatory period leading up to the Civil War, from the raid to the attack on Fort Sumter 18 months later.
Pikes As Propaganda
Dr. Lawrence S. Carlton has studied the fate of the unused pikes. The retired doctor and medical school professor has acted as the unofficial historian of the Canton Historical Museum, which is on the former grounds of the Collins Axe Co.
About a dozen of the pikes, Carlton said, were secured as souvenirs shortly after the raid and somehow found their way to Edmund Ruffin, a Virginia pro-slavery leader who sent them to Southern governors and political leaders with a label that read, "Sample of the favors designed for us by our Northern brethren."
At least one Northern abolitionist, Wendell Philips, acquired a pike and carried it on stage during anti-slavery lectures just before the Civil War, when Brown was being posthumously lionized in the North as a martyr for the anti-slavery cause.
"It's ironic that both sides used the John Brown pikes for propaganda purposes in the hysterical period leading up to the war," Carlton said.
Collinsville and Unionville have also conducted a lively, but mostly friendly, competition over the years about who can claim rights to making the pikes for the famous raid.
Interest in the pikes, and John Brown's raid, seems to be growing as the October anniversary approaches. An evening procession from the Sharpsburg farm to Harper's Ferry will be staged on Oct. 16, and as recently as two years ago, a Dallas auction gallery sold a pike for $13,000.
"$13,000 for a John Brown pike doesn't sound like much to me," said Blair Tarr, the museum curator at the Kansas Historical Society, which bought one of its two original pikes in 1881 for $15, from a Charles Town man. "Anything related to John Brown is very coveted today. He was a very important figure in American history." Copyright © 2009, The Hartford Courant
Posted by Louis A. DeCaro, Jr. . . at 7:11 PM