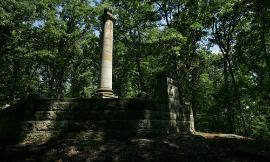 John Brown memorial to reopen to public in Akron, Ohio
Katie Byard. Akron [Ohio] Beacon Journal on-line (July 1, 2009)
A monument honoring a man hailed as a hero by some and branded as a terrorist by others is tucked inside the Akron Zoo. This holiday weekend the public will have a rare chance to view the modest sandstone pillar commemorating famed abolitionist John Brown, who lived in Akron.
The free, guided tours are part of a series of events commemorating the 150th anniversary of Brown's failed raid on the federal arsenal at Harpers Ferry, Va., in 1859.
The monument, which will turn 100 next year, is in a rugged, wooded area of the zoo previously not open to the public. City officials and others long have talked about moving the memorial to a more visible, accessible location, but the monument has stayed put. While the memorial is virtually hidden, ''we get a steady stream of inquiries about it,'' said David Lieberth, the city's deputy mayor and a local history buff. ''He was Akron's best-known citizen internationally before LeBron James.''
In preparation for the memorial tours, zoo and city workers have installed a gravel access road and have cleared brush. Brown put Harpers Ferry on the map when he and his followers raided the arsenal Oct. 16, 1859 — in hopes of seizing weapons and leading slaves in a rebellion. At least four civilians, including the town mayor, were among the fatalities Brown was executed by hanging less than two months later, on Dec. 2. Church bells tolled in Akron and Hudson, where Brown grew up, at his death. The raid and Brown's execution helped to spark the Civil War, some historians say.
''Without him challenging the institution of slavery,'' Lieberth said, ''things may not have materialized as quickly as they did after his death. ''What is still troubling about him is that he did murder people in his cause,'' said Lieberth, who will talk about Brown during the tours. ''He saw himself as a warrior.''
In 1910, the German-American Alliance erected the pillar on land that would become Perkins Woods Park. The area is not far from Brown's former home, on Diagonal Road, where he lived during the 1840s and 1850s and raised sheep for Col. Simon Perkins, of Akron's founding family.
The memorial's centerpiece is a sandstone column salvaged from the Summit County Courthouse that was razed in 1905. Long gone is the bronze eagle that perched on the sphere that sits atop the pillar. Why were German immigrants moved to memorialize a former resident of Akron? ''The Germans take interest in everything in their adopted country,'' an alliance official said in a 1910 Beacon Journal article about the Aug. 21 dedication. ''Nothing had been done to preserve the memory of John Brown.'' the official said, ''and we, the Germans, felt it was our duty to take some step . . . .''
In 1938, a group called the Negro 25 Year Club added a 30-foot-diameter stone bench — surrounding the pillar — and a marker that includes an image of Brown. The marker declares, ''He died to set his brother free. His soul goes marching on.'' Vandals carved named names in the pillar long ago — before the zoo extended its fence several years ago to include the memorial. ''That secured it from any further vandalism,'' Lieberth said. Trouble is, he said, ''it has been closed from public view.'' Lieberth said moving the monument would cost about $100,000. That's not a large sum, he acknowledged, but moving it is one thing and finding the right home is another, he said.
A committee of city officials and community members recommended the monument be moved to city-owned land on the corner at Cedar and Maple streets and Rhodes Avenue. Committee members envisioned an organization partnering with the city and erecting a nearby building on the land, part of which could be used as a visitor information center. More recently, Lieberth, said, officials with the Summit County Historical Society have talked about relocating the memorial to property adjacent to the John Brown home. The historical society maintains the home. If the memorial were outside the Brown home, society Executive Director Paula Moran said, visitors could view it without paying admission — as they would have to at the zoo. The home could serve it as a visitor center.
Regardless of one how feels about Brown, Moran said, ''let's acknowledge Akron's historic role and connection to the abolition of slavery.''
Katie Byard can be reached at 330-996-3781 or mail to: kbyard@thebeaconjournal.com
Posted by Louis A. DeCaro, Jr. . . at 1:17 PM