Seasons Greetings--
It’s In the Cards: The Fruits of Cleanliness

I was lounging about the house the other day, eagerly anticipating the arrival of the folks from Publisher’s Clearing House, with their clusters of gaily-colored balloons and the giant cashier’s check which would financially allow me to lounge about somewhere else. When they (for some reason) did not arrive, I was compelled to invent some other means of occupying my precious time. So I decided, in order to beat the seasonal rush, to do some “spring cleaning” in December.

After renting a steam shovel and two dump trucks, I vigorously attacked one of my desk drawers. While the sundry arachnids scattered to other unseen places, I began to excavate the various strata with pick and gad. At approximately the seven-inch level, I unearthed a yellow envelope, which I had deposited there during some remote geological period. Printed upon it were the words: “Nichols Drug Store, Next to Post Offices, Charles Town, West Va. - Harpers Ferry, West Va.,” along with a promise to “give the Sick the best possible service.”

Within the envelope I discovered seven colorized postcards, all relating to John Brown and Harpers Ferry, one of them hand-dated to February of 1911. It suddenly dawned upon me that this collection had been presented to me by that very Virginia friend and devoted Brownophobe whom I mentioned in my prior posting. Apparently terrified that his next-door neighbors would accuse him of being an abolitionist, he quickly removed the postcards from his premises by giving them to a resident of the Free States (i.e. yours truly).

I spoke to my friend just the other day...(He is presently sampling every barbeque joint in the State of North Carolina.)...and I am sure that he would not oppose sharing these images with the readers of this blog. As a frequent visitor at Harpers Ferry, I personally find them of great interest as “period pieces” of the days before the creation of the present-day National Historic Site. 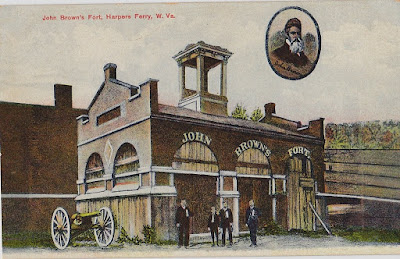 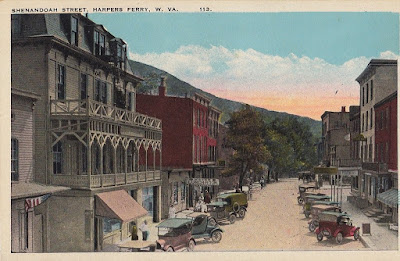 Three: “Looking Toward the Gap from Jefferson Rock, Harpers Ferry, W. Va.”  With the additional inscription on the verso: “The view shown commands one of the most awe-inspiring scenes one ever beheld. Thomas Jefferson, standing on Jefferson Rock, said: ‘This view is worth a trip across the Atlantic.’” 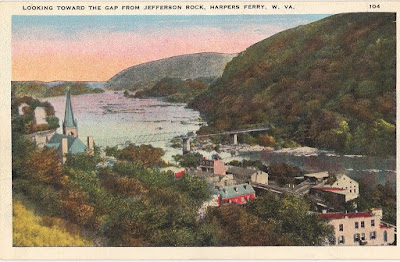 Four: “John Brown’s Monument and War Tablet, Harpers Ferry, W. Va.” With the additional inscription on the verso: “The John Brown Monument, erected by the B. & O. R.R., marks the spot where the fort stood during the Brown Raid. The war tablets give a complete history of the Civil War as was fought around Harpers Ferry.” 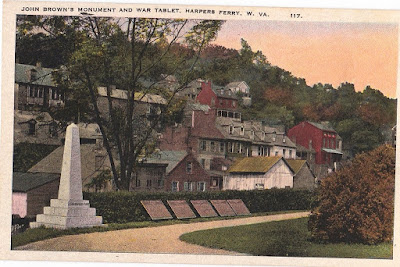 Five: “John Brown’s Fort, Harpers Ferry, W. Va.” With the additional inscription on the verso: “John Brown’s Fort, now located on the Storer College Campus, is used as a library and museum. It was in this building that Brown and his followers took refuge after his attack on Harpers Ferry, October 16, 1859, and remained there until compelled to surrender to the U.S. Marines under the command of Lt. Robert E. Lee.” 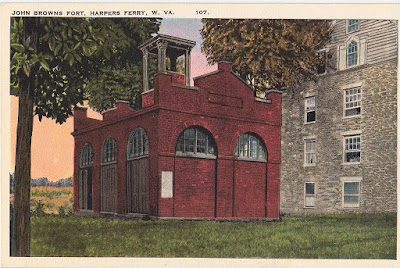 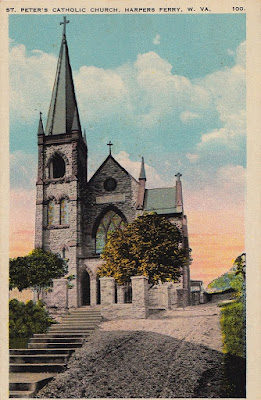 Seven: “Jefferson Rock, Harpers Ferry, W. Va.” With the additional inscription on the verso: “Jefferson Rock is named in honor of Thomas Jefferson. It was on this rock that Jefferson wrote and completed his ‘Notes on Virginia,’ and an extract from the same says: ‘A view from this point is worth a trip across the Atlantic.’” 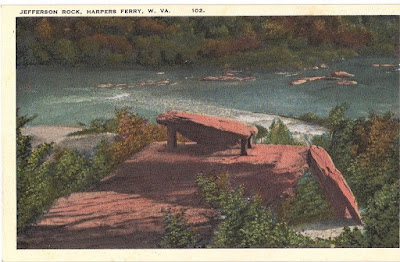 Now there may be some stretchers in those captions, e.g. Tom Jefferson writing his book on the rock. But what would a John Brown article be without a few stretchers? That’s what keeps our beloved blogmaster meaningfully employed!