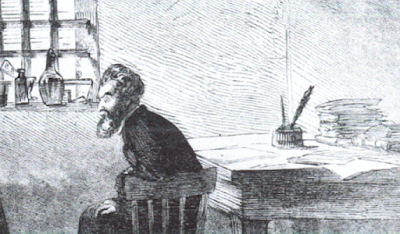 In 1859, December 1--John Brown's last day of life--fell on a Thursday. By all accounts, his last day was extremely busy as he labored strenuously to complete letters that had come to him in jail in the last few days of his life. Many people wrote to Brown--admirers, haters, old friends and family, former business associates, cranks, nut jobs, clergy, Quakers, Spiritualists, children, and many more autograph seekers whose letters he ultimately chose to burn because he could not answer all of them. While a good many letters to Brown have been preserved or published, the bulk of them did not survive. Yet we know that letters poured in, testifying to the impact that Brown had had upon the nation.

In the first part of the day, Brown busied himself writing, as he now anticipated spending as much time as possible when his wife Mary arrived in the afternoon. One letter was interestingly written to a woman named Harriet Randall, whom he had known since his boyhood in Hudson, Ohio. Brown received her letter and responded with the heading, "Charlestown, Prison, Jefferson Co. Va. 1,st Dec. 1859."

I can only say one word to Your most kind letter of the 28th Nov.  I trust God is  With me: “in very deed”. May he ever be with you: &  all yours.


Another letter that he answered was to an old friend in Pennsylvania named James Foreman, his former employee and protege dating back to the late 1820s and 30s. Foreman remembered Brown as a young husband and father, helped him and his children when he was widowed, and credited Brown with teaching him everything he had learned. Brown responded:


I have only time to say I got your kind letter of the 26th Nov this evening. Am very grateful for all the good feeling expressed by yourself and wife. May God abundantly bless and save you all. I am very cheerful, in hopes of entering on a better state of existence in a few hours, through infinite grace in “Christ Jesus my Lord.” Remember “the poor that cry,” and “them that are in bonds as bound with them.”

Your friend as ever,
John Brown

Brown wrote other things, before and after Mary's visit, including another letter to his brother Jeremiah, including something of a property will, delegating personal items to his sons. "I would write to all my friends," Brown closed, "but cannot. Am quite cheerful, & composed."

In the afternoon, Mary arrived by stage from Harper's Ferry, where she was staying in a hotel under heavy surveillance, along with some northern associates that were banned from coming to Charlestown. The humble wife was strip-searched, apparently because authorities were afraid she would smuggle poison to her husband to commit suicide--depriving them of their moment of revenge.
When she was finally admitted to his cell, she fell upon him with a long embrace, weeping on his shoulder.
She had married him, a 32-year-old widower, when she was little more than 17-years of age, and had traveled the sharp ups and downs of marriage for twenty-six years, bearing many of his children and suffering his losses and disappointments faithfully and quietly. She didn't even like living in the Adirondacks, but she had agreed to live there because she too believed in her husband's vision for the fledgling black colony that had arisen there. She would spend several more years in Essex County, then make a struggled sojourn to the west coast in 1864, where she would live out her days, the wife of the most controversial and misunderstood man of the 19th century.

The jailer allowed John and Mary to retreat to his parlor, where they were served dinner without utensils--once more because authorities believed he would take a knife or fork for some desperate purpose. But this was not John Brown's way. He spent the several hours permitted them by discussing the future of their children's education, his burial and other details. Then, when the presiding officer would permit no more time, Mary restrained her tears long enough to exit the jail. He had not seen his wife since June 1859. It was now December 1. He would never see her again, in this life.

Back in his cell, Brown wrote a letter that has survived only in fragmentary form. It is not clear that he wrote before or after he saw Mary, but it was written on December 1, and part of it was reported in a west coast newspaper many years later, after a journalist saw it among the papers of one of Brown's daughters:


Today is my last day upon Earth. Tomorrow I shall see God. I have no fear, I am not afraid to die. And I can say the words of our blessed Saviour: "Father, forgive them: they know not what they do. . . ."

thank you for these posts