Although Mary Brown had reached her home state, the trek back to North Elba was yet a journey of several days and many miles, including the difficult mountain roads that would bring the old man’s body back to his humble farm in North Elba. Escorted by McKim and Phillips, she traveled northward by rail to Troy, New York, then Rutland and Vergennes, Vermont. Throughout the journey, she met well-wishers, white and black, all wanting to shake the hand of John Brown’s widow. Near Vergennes, the coffin was escorted onto an old sail ferry that took them across Lake Champlain to Westport, New York. Before crossing the lake, Mary sent a message ahead to North Elba, “to apprise the family of the approach of the remains.”


From Westport, Mary and the humble funeral cortege traveled to Elizabethtown, the county seat, where they remained overnight. Under the direction of the Essex county sheriff, Brown’s coffin was placed in the courthouse under guard, where people from the community also gathered to hear reports from McKim and Phillips.

From Elizabethtown, the party faced the most difficult traveling of the journey, following a winding mountain road, with its eerie dark canopy of Adirondack forest. To make matters worse, heavy rains had caused the snow to melt, forcing travelers to use carriages instead of sleighs. Weary and frustrated, they were now beset by deep mud and an increasingly steep and challenging road. “The roads were so bad as to be almost impassable,” wrote the New York Tribune correspondent.


After a brief reception by Phineas Norton in nearby Keene, they slowly climbed the mountain pass, ascending until they reached the Brown farm at sunset, being quietly received amidst glowing lanterns. Mary was greeted by weeping daughters and daughters-in-law, along with the rest of her grieving family. The outpouring of grief deeply moved the Tribune correspondent, who wrote that it was “a scene entirely beyond description.” However, emotion shortly “was put under restraint” so that McKim could provide them with a full report of all the events that had transpired since their mother’s departure for the South. The old man’s remains were carried into the house and brought upstairs, the coffin being set in the open second floor for the night.


The following day, Thursday, December 8, the funeral began at one o’clock in the afternoon, beginning with the singing of Brown’s favorite hymn, “Blow ye the Trumpet,” an 18th century Methodist invocation of the theme of the Year of Jubilee from the Hebrew scriptures. Next the eulogy was given by the Reverend Joshua Young of Burlington, Vermont, which the Tribune correspondent called “a spontaneous offering.” Religiously speaking, Brown’s first choice would not have entailed having a Unitarian minister perform his funeral service. However, the family had no evangelical clergyman in the immediate vicinity—at least, not one willing to comfort the Browns and face the inevitable conservative backlash. In fact, Young had traveled all night with an associate just to be present at the burial, and had no expectation of being pressed into service. . . .


After Young’s prayer, McKim spoke, acknowledging that although he had never looked upon John Brown’s face “till it was cold in death,” he had come to know the old man through the developments of the recent weeks and now felt honored to stand under his roof. Speaking to Brown’s grieving children, he declared that their fallen father and brothers “not only died bravely, but they died usefully; they were all benefactors; they were all martyrs in a holy cause.” The old man had made a great impact, McKim declared, so that even one of the staunchest proslavery officers at Charlestown had come to him secretly, begging that he might somehow obtain some memento of Brown, which he would “greatly value.”


Wendell Phillips stood to speak, declaring that John Brown had abolished slavery in Virginia. “You may say this is too much,” Phillips continued. But the old man had “loosened the roots of the Slave system,” the way a tempest might uproot a great tree. The fallen tree might remain green for months or even years, just as the slave may yet remain on the plantation. However, slavery would now struggle in dying breath, for John Brown had proved that “a Slave State is only Fear in the mask of Despotism.” Now, the old man could sleep “in the blessings of the crushed and the poor, and men believe more firmly in virtue, now that such a man has lived.” Another hymn was sung, during which the coffin was brought outside and placed on a table near the door, the top part of the casket opened for viewing. The face seemed still “almost as natural as life—far more so than an ordinary corpse,” wrote the Tribune correspondent. Like the fallen tree of slavery, the sign of life still appeared on the fallen old man too. Slowly, friends, and then family, came to bid farewell to John Brown.

As the coffin was lowered into the grave, the family’s grief poured forth, and the young minister stood up, raising “his deep and mellow voice” in the words of Saint Paul, “I have fought the good fight; I have kept the faith; henceforth there is laid up for me a crown of righteousness which the Lord, the righteous judge, shall give me; and not to me only, but unto all that love his appearing.”

. . . . The funeral was over by three o’clock in the afternoon, and the guests were eager to depart for home, hoping to go as far as possible before dark, although McKim and Phillips only reached Keene by nightfall. The following day, they made their way down to Westport, crossing back over the lake, but remained one more night in Vermont before returning home.


. . . . John Brown’s family was now left alone to invent a new life without him. Outside the small farmhouse, about fifty feet from the door there stood a large boulder, some ten or twelve feet high, of granite formation. Brown loved this great rock and left instructions that he should be buried next to it, thus pairing his grandfather’s memorial stone with the Almighty’s granite monument to the ages. Two years after the Civil War, a journalist for the New York Times would stand between John Brown’s gravestone and the great boulder, pondering the relationship of one to the other. “Was this rock placed here purposely as a monument for the one who alone and silently lies at its base?”
======================== 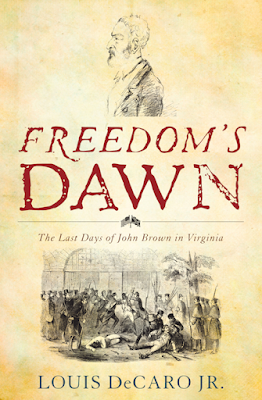