Recalling a Brave Man: Lubet on John Anthony Copeland, "The 'Colored' Hero of Harper's Ferry"
On the 16th of this month our esteemed associate, Steven Lubet, published a remembrance of Harper's Ferry raider, John A. Copeland, who was executed with three other of John Brown's raiders in Charlestown, [West] Virginia in 1859.  Lubet is Williams Memorial Professor and the Director of the Bartlit Center for Trial Advocacy, at the Northwestern Pritzker School of Law.  Among his other fascinating books involving law and history, Lubet's recent works on Brown's men have been wonderful contributions to our study.  The first of these, John Brown's Spy, is the first biography of John E. Cook (Yale Univ. Press, 2012), and The "Colored" Hero of Harper's Ferry, is another first, being the biography of John Anthony Copeland (Cambridge Univ. Press, 2015).   I had hoped that Lubet's piece on Copeland would have been accepted for publication on December 16 in some notable national publication, and am annoyed (but not entirely surprised) that the good liberal editors of these publications did not value the memory of Mr. Copeland and his sacrifice sufficiently, nor appreciate the contribution of one of our most important contributors to the John Brown bookshelf.  Notwithstanding this disappointment, I'm happy to have the privilege of reprinting Lubet's piece from The Faculty Lounge.

Interestingly, Lubet's book was reviewed this month in another blog, Civil War News, by Wayne L. Wolf, Professor Emeritus at South Suburban College (South Holland, Ill.), and past president of the Lincoln-Davis Civil War Roundtable.  Wolf provided a fairly positive review of The "Colored" Hero, calling it "well written and historically sound."  However, Wolf concluded that "it displays an obvious bias toward Northern abolitionist thinking. It is recommended for those contending that slavery was the cause of the Civil War and that this militancy undid decades of compromise"! Obviously, Professor Wolf is among that mystified cadre of scholars who actually believe that the Civil War might have been evaded had the mythic wisdom of level-headed compromise prevailed.  In turn, Lubet makes an appreciative response on The Faculty Lounge (Dec. 22) which I've taken the liberty of reposting as well.  Lubet's kind rejoinder is quite well stated, and certainly shows the folly of the "failed compromise" school of thought.--LD

The Crime of Freeing Slaves
Steven Lubet (Dec. 16, 2015)
On this day in 1859, the Commonwealth of Virginia executed Shields Green and John Anthony Copeland, two black men who had joined John Brown’s fateful attempt to free the slaves of the southern states.  Although little noted in most history books, their sacrifice should be long remembered, even as our nation continues to struggle with slavery’s legacy of racism.
Shields Green was an escaped slave from South Carolina who had been introduced to Brown by Frederick Douglass.  During the Harper’s Ferry raid – which began on Sunday, October 16 and lasted for three days – Green had been assigned to guard Brown’s white hostages, which drew the special ire of slave masters.  One plantation owner railed at Green’s “impudence” in pointing a rifle at white men, and Virginia’s governor called Green a “coward,” although in fact he had declined an opportunity to escape and had instead remained bravely at Brown’s side until they were both captured by troops under the command of Col. Robert E. Lee.
John Anthony Copeland had been born free in North Carolina, but had moved with his family Oberlin, Ohio, when he was a child.  Oberlin was the most abolitionist-minded community in the United States during the antebellum era, and Copeland had grown up in the anti-slavery movement.  He had been a leader of the Oberlin-Wellington Rescue of 1858, in which he had literally wrested a runaway from the clutches of slave catchers, and he had afterward escorted the fugitive to freedom in Canada.
Copeland had been recruited to the abolitionist army by John Brown, Jr., who had traveled to Oberlin the previous summer on his father’s behalf.  Arriving at Brown’s headquarters on Thursday, October 13, he scarcely had time to meet his new comrades – who numbered only 21, including Brown and three of his sons – before the historic attack on slavery began late on Sunday night. 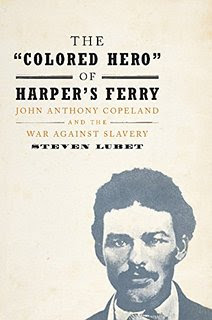 Brown’s march into unsuspecting Harper’s Ferry was initially successful, as his men were quickly able to take control of the federal arsenal and armory.  Copeland and two others were sent to capture a nearby rifle factory, which they accomplished with ease.  Soon, however, the town awakened, as church bells rang the alarm.  Brown and his men were surrounded by the local militia, who rained fire down upon the abolitionist positions.  Ten of Brown’s men were killed in the fighting, but Brown and Green were taken alive.
Meanwhile, Copeland and his comrades staved off repeated militia attacks on their redoubt in the rifle factory.  After the seventh assault, they realized that their position was hopeless and fled through the rear entrance.  The other two men were shot and killed while attempting to cross the Shenandoah River.  Copeland, too, waded into the river, but he was cornered by the militia and surrendered when his dampened pistol would not fire.
The prisoners were brought to nearby Charlestown, to await trial before a Virginia court.  Brown was tried first and quickly convicted and condemned to death, although his inspiring speech at sentencing succeeding in stirring abolitionist sentiment across the North.  Green and Copeland were tried shortly afterward.  Their attorney, a Boston abolitionist named George Sennott, raised a remarkable defense that condemned the institution of slavery – but to no avail.  Both black men were convicted and sentenced to hang.
Brown was executed on December 2, leaving behind a prophetic note in which he predicted that “the crimes of this guilty land will never be purged away but with blood.”
Green and Copeland faced hanging two weeks later.  Interviewed by reporters on execution day, Copeland sent word to his friends and family in the North.  “If I am dying for freedom,” he said, “I could not die in a better cause – I would rather die than be a slave.”
The two African-Americans were taken to the gallows in an open wagon.  Once on the scaffold, Copeland attempted to address the crowd.  The privilege of a final statement was routinely granted to condemned men in the nineteenth century, but the Virginians would not let Copeland deliver another denunciation of slavery.  The hangman choked off his speech, pulling a hood over his head and tightening the noose.  The trap was sprung and the two  "colored heroes" of Harper's Ferry were hurled into eternity.
Copeland’s family had gathered together for prayer on hanging day.  Following a Bible reading, Copeland’s mother turned toward her husband and children.  “If it could be the means of destroying slavery,” she said, “I would willingly give up all my men-folks.”
Slavery was indeed destroyed by the coming Civil War, sparked in no small part by the actions of Brown, Green, and Copeland.  It is altogether fitting and proper that we should recall the brave men who, to paraphrase Lincoln, gave the last full measure of devotion in the battle for freedom.-Steven Lubet
===

In an otherwise very favorable review of my book, The "Colored" Hero of Harper's Ferry, Wayne Wolf concludes that it “displays an obvious bias toward Northern abolitionist thinking.”  Well, yes, I suppose that it does, in the sense that John Anthony Copeland was an African-American abolitionist who sacrificed his life in an attempt to free slaves in Virginia.
Wolf, whose review appeared in Civil War News, evidently belongs to the “failed compromise” school of antebellum history, which holds that the Civil War was not brought about by an “irrepressible conflict,” as Lincoln put it, but was instead  a tragic blunder that could and should have been avoided.  As he writes in the review, “Support for forceful abolition of slavery quashed any hope that moderation or compromise could avert war.”
“Compromise,” however, would have meant the perpetuation of slavery for another decade or longer – meaning that 4 million Americans would have been subjected to a further lifetime of forced labor, torture, and family separation.  The Constitution itself had been a compromise with slavery.  The next compromise came in 1820, with the admission of Missouri as a slave state, after which the southerners kept pressing to strengthen and expand the institution into territories where it had been prohibited (including plots to annex Cuba, and perhaps even Nicaragua).  Then came the “Compromise of 1850,” which required northern complicity in the Fugitive Slave Act.  And then came the Kansas-Nebraska Act of 1854, which extended slavery across the Missouri River.  From 1790 to 1860, the number of  enslaved persons in the United States quintupled.
Wolf writes that “The South viewed war as its only option, and abolitionists agreed,” but of course there was another option.  The southerners could have freed their slaves – which is something they refused to do even in early 1865, when Lincoln met with Confederate officials at Hampton Roads and offered them compensated emancipation in lieu of the certainty of military defeat.
Despite our differences in outlook, Wolf was very generous in his review, fully summarizing the details of Copeland’s life and praising Colored Hero as “well written and historically sound.”  His concluding sentence is also quite accurate, though perhaps not in the way that he intended.  Colored Hero, he writes, “is recommended for those contending that slavery was the cause of the Civil War and that this militancy undid decades of compromise.”
[Note to those who think I am too partisan:  The heroes in my three Civil War books were mostly Republicans, and many of them were Evangelicals.]--Steven Lubet
Posted by Louis A. DeCaro, Jr. . . at 12:11 AM