What James Baldwin Might Say to James McBride on 110th Street

According to Chris Vognar of the The Dallas Morning News (Nov. 30), novelist James McBride appeared at the Texas Book Festival in Austin, Tex., on October 26th, and spoke about his award-winning novel, The Good Lord Bird.  Vognar quotes McBride as saying of Brown, “The guy was crazy. . . He was a madman. But we’re still talking about him, and I kind of fell in love with him a little bit.”  Vognar's article also reports:


The level of distrust between whites and blacks in this country is something that is really hard to talk about,” McBride says. “John Brown shows up and says, ‘I’m gonna free every black person here,’ and every black person there jumps up and runs out of the room. That’s funny, and it probably happened. I can’t say it definitively happened, but that’s one of the things fiction allows you to do. It allows you to discuss things that are really hard to discuss.”

As I also wrote to the Morning News, this is almost always the problem with historical fiction writers and John Brown, even when they "kind of fall in love with him," as it seems was the case with Russell Banks also.  The problem is that fiction writers like McBride have only done as much "research" as necessary in order to set up a plausible framework and characterization of their subject.  Beyond that, they are free to go in any direction in the name of art.   While all historical fiction threatens to confuse and mislead readers, this is particularly the problem with Brown, who often doesn't even get a fair shake from historians and popular historical authors.   Russell Banks thinks John Brown was a terrorist (I know this, because I heard him say it with my own ears in 2009), and James McBride thinks Brown was "crazy" and a "mad man."  Invariably these novelists took these notions with them into the writing process and produced whatever portrayal of Brown suited their imaginations.

It's only fiction, why be concerned?

Unfortunately, the public has been digesting fiction about Brown for nearly a century, in various forms and media, and McBride's presumptions are only going to further contribute to the mistaken notions that prevail among people in this society about him.  As irrational as it may sound, it is also likely that many whites (not all) will take McBride's fictive view of Brown more seriously because he is a black writer, and because he does not overtly wish to diminish Brown's stature as many white writers have sought to do over the years.


Worse, it is too bad that McBride couldn't have limited his words about Brown to his fiction. Instead, he has presumed to speak to the real John Brown of history, and has framed his presumption with supposed facts.   The 19th century theologian Tryon Evans once observed that fiction is "the fanciful and dramatic grouping of real traits around imaginary scenes or characters," and may just as easily convey "false views of men or things" as portray life truthfully.  I don't know how James McBride has used fiction, whether for conveying "false" or truthful representation of John Brown. However, it is apparent that he has taken his own fiction too seriously.  And this is the rub.  Writers of historical fiction should recognize the limits of their role.  The historical fiction writer's role ends with the end of his/her novel.

When James McBride stands before people and pontificates on Brown's mental state or the reaction of blacks to his appearance in Virginia in 1859, he has presumed to play another role, one which he has no business undertaking unless he's done all his homework.  And clearly, he has not.

McBride has recently been announced as the winner of the National Book Award, and he is to be congratulated for his success in writing fiction.   Yet he has hardly done a kind service to John Brown's legacy.  Whatever impact his novel has on popular thinking about Brown, it probably will result in more misinformation; I doubt people will finish The Good Lord Bird, and then devote themselves to a more serious consideration of Brown by reading a number of biographies. Rather, they will embrace McBride's fictive Brown as the man who lived, and get on with the rest of their lives, laden with all kinds of mistaken notions, based upon The Good Lord Bird.  The admiring audience in Austin, Texas, who heard McBride speak (and the readers of the Morning News), will also move on with the novelist's sentiments echoing in their minds--about a "mad" John Brown who scared black people away. 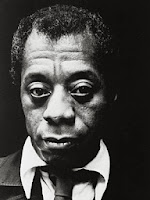 I'd like to do a short, fictional story about a novelist named James McBride, who writes a cockeyed story about a "mad" John Brown, wins a big award, and makes a name for himself at the expense of history and the legacy of the abolitionist.  Then, in my story, the ghost of James Baldwin (who loved and respected Brown) would chase McBride down Lenox Avenue in Harlem, then west along 110th Street until McBride comes to Frederick Douglass Circle, where the author hides behind the statue of Frederick D., hoping Baldwin's Ghost won't find him.  But Baldwin does find him and calls him a few choice words that would not be correct for me to write on this blog.  I know it's only fiction, but I'm almost sure that after lecturing McBride for several hours on John Brown, James Baldwin would tell McBride precisely what to do with his award.