John Brown Wanted to Walk to the Gallows


This account is excerpted from Crosby S. Noyes' report in The Washington Star, December 3, 1859.  John Brown aficionado, Boyd B. Stutler, considered Noyes' coverage to be the best single report on the hanging of the abolitionist.

Shortly before 11o’clock Brown was led forth from the jail.  He emerged with a firm step, ascended to the cart (arms pinioned), and seated himself coolly upon his own coffin, upon which he remained seated all the way to the gallows.  The cart was a yellow, rather clumsy vehicle, drawn by two white horses.  Brown was accompanied by Sheriff Campbell, Jailer Avis, and other guards; also, by a strong military escort.  He gazed with quiet scrutiny in every direction as if to take in the whole scene and all its surroundings. 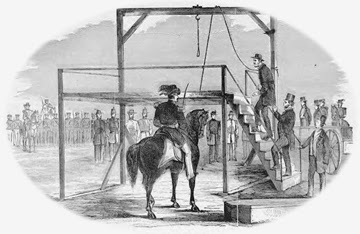 Sheriff Campbell remarked, “Why, Mr. Brown, you don’t seem at all excited!”


“There is no occasion for excitement,” calmly answered John Brown.

It is understood that he begged hard to be allowed the privilege of walking to the gallows.  The distance from the jail to the gallows is perhaps 400 yards.

The various representatives of the press were conducted to the place assigned to them some two hours before the execution.  Their position, though somewhat more favorable for seeing what transpired than had seemed probable at one time, was of an unnecessary distance from the gallows, and we believe that it was the unanimous verdict of the “Fourth Estate”1 present that the reason assigned for this exclusion, viz. that John Brown might say something and the press report it, was too childishly puerile to do credit to the Executive of Virginia.

The military within the field were located at points designated by white signal flags, bearing the names of the different companies.  Their lines formed two octagons, one within the other, and of which the gallows was the centre.  Drawn up beyond the rail fence of this field were long lines of cavalry; and the country in every direction as far as the eye could reach was dotted with squads of sentinel soldiers, their brilliant uniforms bringing their figures out in strong relief against the somber autumn brown of the landscape.  The number of spectators, aside from the military, was not large, perhaps a couple of hundred in all, and these, with the exception of the members of the press, and some half dozen privileged civilians seated upon the gallows steps, were excluded from the field. Not a female was to be seen by the naked eye in any direction, but by the aid of a glass some few were observed at the windows of distant dwellings.  A few colored people were seen along the road skirting the field, apparently slaves, sent by their masters to learn a salutary lesson.  Almost every tree in the vicinity was loaded down with boys.  The appearance of a single carriage upon the field, bearing a crippled man, attracted attention.  It proved to be Samuel C. Young, of Harper’s Ferry, one  of the citizens wounded by Brown’s men, and permitted, therefore, to enter the lines as a spectator.  Shortly before 11 o’clock Gen. Taliaferro, with a formidable staff, entered the field, and soon after the prisoner and cortege came up and halted in front of the gallows.

Brown descended from the cart and mounted the platform with the same imperturbable wooden composure which had distinguished him at every step of his progress.  He was dressed in a well worn suit of black cassimere—the same which he were on first entering Harper’s Ferry, --white woolen stockings; red, figured carpet slippers, (that he had, previously used in jail;) a colored cotton shirt; gray wool undershirt; no neck cloth of collar.  It was noticed that his neck and breast were as white as a woman’s.  The sheriff and jailor mounted the platform with Brown, and quickly adjusted the white cap over his head and the rope round his neck, and had tied his feet securely.  Then occurred another remarkable exhibition of nerve by Brown.  He was requested to take his place on the drop, (trap door,) “I can not find it blindfold[ed]; guide me to it,” he answered in the same even tone of voice as if asking for a chair.  He was placed in position, and then there was an unpleasant pause of some eighteen minutes while some companies at a distance were brought up.  The sheriff made some explanation to the prisoner about the delay.  “I don’t care,” he replied, “only don’t keep me waiting unnecessarily.”

After some further moments of suspense, during which the prisoner stood without a tremor, at a quarter past 11, Col. Smith called out audibly, ‘All ready, Mr. Campbell.”  The sheriff touched the spring, the flooring dropped beneath the prisoner’s feet; down he shot through the trap, then up, then down; there was quick, convulsive movement of the hands; a slight muscular tension of the limbs, then they straightened, and the body swung perpendicular, turning slowly round and round—this motion, with the fluttering of the coat skirts in the breeze, giving it singularly the appearance of a corn-field scarecrow, and the more that his gaunt frame and limbs bore apparently not an ounce of surplus flesh, and thus did not fill out his clothes.  Yet he had positively gained in weight while in jail.  As Gov. Wise said, he must have been a bundle of nerves—and nothing else!  It was a relief to turn from the ghastly  spectacle to the tranquil beauty of the neighboring landscape—the mountains of the Blue Ridge bathed in soft purple haze, and the green, undulating wheat fields on the opposite horizon. 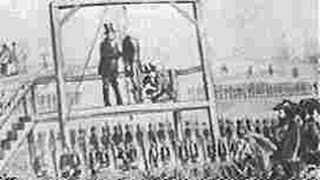 The body hung 20 minutes or more, and then Drs. Starry, Cook, and Straith, with blue ribbons at their buttons, ascended the platform, felt the hanged man’s pulse, examined his neck, and applied their ears to his heart.  Then they withdrew, and four Regimental Surgeons went through the same programme.  Then they too retired, (as the platform was not deemed strong enough to bear more than half a dozen persons at a time,) and so on, (including several slips of boy-surgeons) to the number of twenty.  Then “Porte Crayon,” Strother, the artist, a thin, sickly looking young man, with others, visited the platform for  a moment, and at the end of 36 minutes the body was cut down.  The neck was not broken, and the medical examiners declined certifying to death having taken place until after a further examination to be held at the jail at 3 p.m.  Dr. Mason held to the opinion that it was possible in such a case to restore life by galvanic action.3  It was supposed, however, that strangulation took place after less than four minutes suspension.

The rope left no mark of abrasion on the neck.2  The eyes of the corpse were open, but not staringly so.  The mouth also was open and would not close.  The face was not unnaturally distorted, though the blood vessels were somewhat distended, as occurs in death by strangulation.

The body was placed in the coffin (of black walnut) and this again in its “shell” of white pine.  This exterior casing bore the penciled lettering “John Brown, Esq.,” doubtless an achievement of the undertakers.  At 6 o’clock in the evening the corpse was taken from the jail and conveyed by an extra train to Harper’s Ferry, where Mrs. Brown was awaiting it.  She stopped at the Wager House, and in the morning she proceeded North by the three o’clock train, proposing to take the most direct route and with the least publicity to their home at North Elba, N.Y.  She was accompanied by a gentleman by the name of McKim.

1 The Fourth Estate was a publication for newspaper publishers and advertisers.
2 Based on other eyewitness accounts, this is doubtful.  The deep rope mark around Brown’s neck was quite visible to others, so Noyes either did not get a good look or he intentionally played down the appearance of Brown’s body.
3 According to the New York Herald, 6 Dec., some of the doctors mentioned were not convinced that Brown was dead after his body was cut down from the gallows.  The remains actually were left in the jail and re-examined later in the day before being released to Brown's widow.  One source says that one of the examining physicians wanted to administer poison to the corpse in order to make certain of his death.

Thanks, Lou. An excellent and revealing account. A solemn day. Today we'll sing for the Old Man. -Greg