Is John Brown the Next Story for Quentin Tarantino?

Michael West reports on Contactmusic.com that Quentin Tarantino is preparing a "follow-up to Django Unchained," and "almost has a script, which the prolific director has penned himself and plans to develop in 2014."  According to West, the upcoming project will be a western, which may or may not fit the Brown story, except for the Kansas episode.  "During the publicity tour for his last movie," West writes, "Tarantino spoke about making a movie about the abolitionist John Brown, treating him as mythic hero from a western standpoint."  This may be true, but it is also possible that Tarantino is looking at other projects, including an Australian cowboy film or an adaptation of an Elmore Leonard novel.

West reiterates Tarantino's enthusiastic words from a previous interview revealing his warm admiration for Brown and his desire to make a film about the abolitionist.  However, if I recall, Tarantino said he was thinking of doing this somewhat further in the future, perhaps in his later years, and might even consider playing the role of Brown himself.  It may be that the recent appearance of books and the latest accomplishment of the award-winning novelist James McBride has caused Tarantino to move the John Brown project to the front burner.

It remains to be seen whose John Brown film makes it to the screen first. There is no lack of talk on the subject, but it is hardly worth holding one's breath at this point. 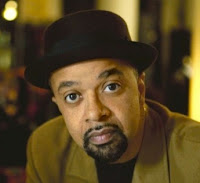 James McBride's The Good Lord Bird, which imagines a teenage slave joining abolitionist John Brown's 1859 raid on Harpers Ferry, won the National Book Award for fiction Wednesday night.  The judges praised McBride for "a voice as comic and original as any we have heard since Mark Twain."

McBride, 56, who hadn't prepared an acceptance speech because he didn't expect to win against the likes of Thomas Pynchon, Jhumpa Lahiri and George Saunders, said, "They are fine writers. But it sure is nice to be here."