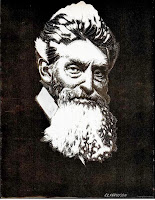 From the primary evidence, I have never seen Brown make direct reference to Christmas or the celebration of the holiday.  There are one or two extant John Brown letters dated close to December 25, and none of them have a Christmas greeting, nor any reference to the Christmas season at all.  Judging from John Brown's letters alone, it is almost as if there were no Christmas.

This is not a well-researched article, but from what I have been able to glean, the popular celebration of Christmas in the United States did not predominate until late in the 19th century. The reason for this is layered and extensive, but we can say that for Protestants, generally speaking, Christmas festivities and celebrations were associated with Roman Catholicism.  The earliest Christmas carols and Christmas celebrations were carried down through Roman Catholic worship and religious culture.  Since the Virgin Mary was venerated along with the newborn Jesus--and likewise with all of the pomp and festivity surrounding it--the Christmas "Baby" was typically thrown out with the "bath water" of Roman Catholicism by many traditional Protestants, especially those from England.

This anti-Christmas sentiment was particularly true of the Puritans, whose opposition to Christmas was part of their efforts to erase Roman Catholic doctrine and custom from English church and society. Oliver Cromwell, one of Brown's historical heros, outlawed Christmas during his time of influence; although England's Christmas observance was later restored, the anti-Christmas sentiment was carried to North America by the Puritans. In "New England," Puritans endeavored to found a pristine Protestant society sans Romish and papal practice, and for a brief time their little experiment worked. In time, however Puritan theology, including hostility toward Christmas celebration, tended toward compromise.

John Brown was likely brought up in a religious culture with some disdain toward pronounced Christmas celebration, but not entirely exclusive of holy-day remembrance.  Based upon what historians of Christmas culture tell us, it seems that the revitalization and "Protestantization" of the holiday in the United States was just starting to kick into gear in the mid-19th century.  I read somewhere that "Jingle Bells" was copyrighted in 1857, the same year that John Brown was tramping around New England as a Kansas free state fundraiser.  Christmas trees, caroling, and decorations were simply not widespread among northern evangelicals yet.  Christmas was just not that big of a deal in Brown's antebellum era.

Furthermore, not only was Christmas still overcoming its waning association with Roman Catholicism in the Protestant mind, but it was more widely celebrated by Protestants in the South. According to one source I consulted, Christmas was first made a state holiday by several southern states in the 1830s, while Protestants in the North tended to favor Thanksgiving as the foremost Christian holiday because they believed that expressing humble thanks to the deity was more important than celebrations and parties.  Perhaps one reason for the flourishing of Christmas in the South was due to the predominance of Episcopalian and Methodist churches, over against the Puritan denominations in the northeast.  I cannot help but wonder too, whether one of the reasons that Christmas was more popular in the South was because slave masters commonly gave their enslaved people a "day off" and often encouraged drunken celebrations by the slaves.  Did slave masters also feel a little safer from slave revolts during the holiday? And does this association of Christmas with the South also explain the slower development of Christmas culture in the antebellum Protestant North?

On the other hand, there is one reference to Christmas that exists in the Brown family record that I am aware of, namely the Christmas dinner held in Hudson, Ohio, on December 25, 1856, at the home of Jeremiah and Abigail Brown.  We know about this family gathering based upon a letter by Wealthy Hotchkiss Brown, the wife of John Brown Jr., which is in the Clarence S. Gee Collection at Hudson Library and Historical Society.  This was clearly a Christmas dinner, although it may have been further prompted by the fact that John Brown had just returned to Ohio from war-torn Kansas territory. According to Wealthy, Brown and all of his sons were present except Oliver, who probably was back in North Elba, N.Y. with Mary and the children.  So at least we can place the Puritan-loving John Brown at Christmas dinner on December 25, 1856.  Of course, by the following Christmas, 1857, Brown was traveling through Iowa toward the east, once again far from his family.  On Christmas day in 1858, he was back out west, waiting to fight off a pro-slavery attack in Kansas in the midst of carrying a dozen fugitives from slavery across country to Canadian freedom.

Of course, by Christmas day 1859 his body was "moldering in the grave."

[Excerpted and revised from a previous entry--LD]

Merry Christmas to my Christmas-observant readers, and Happy Holidays and observances to all.  May your New Year be prosperous and healthy.
Posted by Louis A. DeCaro, Jr. . . at 2:38 PM