Auction News--
"A Life View" of John Brown for Sale 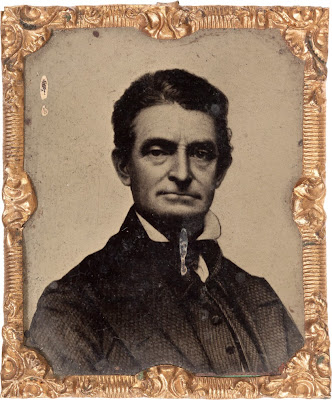 Historical Collectibles, a notable auction house based in Dallas, Tex., is now advertising "A Most Unusual and Rare Tintype Image of the Notorious Leader of the Harper's Ferry Raid."  The image is to be auctioned at HC's Americana Signature Auction in Dallas on November 23-24. According to HC, this tintype was included in an 1862 series of tintypes published by Abbott and Company of New York featuring prominent Americans. "These were widely distributed," declares HC's website, although this is the first they have seen of "this John Brown variety."  Quite in contrast, HC has seen "several dozen examples of the popular Lincoln version."  This is hardly a surprise.

However, the John Brown image is not a new discovery, unlike the one recently reported on this blog--that image not yet being a public matter.  Brown image and document aficionado, Jean Libby, has included this image in her indispensable, John Brown Photo Chronology (Palo Alto, Calif., Allies for Freedom, 2009).  Libby notes that it originated as a daguerreotype made in January 1857, at the time Brown was moving among eastern antislavery people as an advocate of the Kansas Free State cause.  Libby provides an 1864 letter by James Redpath, who recalls that Brown had three copies of the daguerreotype made, one of which was personally given to him by the abolitionist.

Subsequently, a lithograph engraving of Redpath's copy of the daguerreotype was made by John Chester Buttre for Redpath's 1860 authorized biography, The Public Life of Capt. John Brown.  Libby quotes a plastic surgeon and a forensic anthropologist, both of which believe the original daguerreotype image (now held by the Boston Atheneum) shows signs that Brown had had a small stroke; other health professionals have suggested Bell's palsy, which is more likely the case. Brown was also suffering with recurring bouts of malarial "Ague," and may have had related problems in his eye and ear as a result.  For many years, the daguerreotype image has been mistaken as Brown's "crazy picture," due to the prejudiced misrepresentations of writers and film makers in the 20th century.  Buttre's 1860 engraving ameliorated the sickly appearance of Brown to a great degree, although the tell-tale drooping mouth is still evident in the lithograph.


When apprised of the "tintype" on auction, Libby wrote:

Mary Brown was directly involved in the distribution of photographs and the decision for Redpath to write a biography instead of Lydia Maria Child.  This occurred at the meetings in December 1859 at the time of Brown's funeral.  Redpath notes that she has approved the Buttre engraving, indicating that she did not like the original daguerreotype which shows the onset of an episode of Bell's Palsy.

Libby also observed that "the tintype at auction was made from the engraving, therefore it is a mirror view of it, becoming a life view."

The latter point is worth reiterating: The HC tintype image is a derivation of the Buttre engraving, which itself was based upon the 1857 daguerreotype.  However, the tintype presents a real "life view" of Brown.  This is because daguerreotypes present a reversed image, and Buttre's engraving only reproduced the same reversed image.  This is important, particularly in this case, because the drooping side of Brown's face and mouth actually was on the right side.  In the Boston Atheneum daguerreotype and the Buttre engraving, it appears on the left side.   However, this tintype, being a photograph of the image, thus reverses the reversed image--setting right the actual appearance of the abolitionist's drooping mouth.  This is John Brown in 1857.