Langston Hughes: "Shame On You" 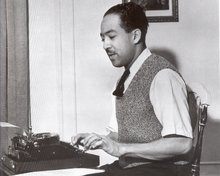 Many are aware of the great Harlem Renaissance poet Langston Hughes and his admiration of John Brown. Hughes' grandmother was Mary Patterson, the widow of Harper's Ferry raider, Lewis Leary.  After Leary's death in 1859, she remarried Hughes famous forebear, the abolitionist orator Charles Langston.  Young Langston Hughes was reared with a great respect for Brown and his black and white raiders, and sometime in the 1920s he authored his wonderful poem, "October 16" ("Perhaps you will remember John Brown").

Less popular perhaps is another poem by Hughes, written about two decades later and published in Phylon, the Atlanta University's publication founded by W.E.B. DuBois.  This poem is entitled, "Shame on You," and expresses Hughes' disdain for the failure of historical memory in the nation at large, as well as that of the black community.  Its brief verses go:

But the people will forget


A movie house in Harlem named after Lincoln.

Nothing at all named after John Brown.

Any better than white.

If you’re not alive and kicking, shame on you!

According to the fascinating blog, Harlem + Bespoke (2 Mar. 2010), the "movie house in Harlem named after Lincoln" to which Hughes referred was the old Lincoln Theater, located at 58 West 135th Street in the heart of Harlem.  The blog says that the Lincoln Theater was the "first theater in Harlem to cater to an African-American audience."  It was opened in 1915, when Harlem was still "vastly white."  Later, it became a notable venue in the Harlem Renaissance for entertainers like Bessie Smith and Fats Waller.  In the following decades, the Lincoln Theater became a movie theater, as shown in Harlem + Bespoke's 1936 photograph.  In the 1960s, the theater was purchased by the Metropolitan Church and was given a new facade, although Harlem + Bespoke says that the interior theater was preserved.  Maybe the closest John Brown got to The Lincoln Theater was the showing in 1955 of "Seven Angry Men," a mediocre film about the abolitionist and his sons in which Raymond Massey reprised his role as Brown from the terribly distorted portrayal in "Santa Fe Trail" (1940).