Norman Marshall, portrayer of John Brown, is currently visiting the west coast, and will be performing his one-man play, "John Brown: Trumpet of Freedom" at the University of LaVerne, LaVerne, Calif., on March 26th (see information below).  Norman made a point of searching out the resting place of Henry and Ruth Brown Thompson in Pasadena, and has provided some pictures of the grave markers.  Rather than simply post the pictures, I have endeavored to provide a short historical sketch--although I regret that I do not have the time to provide a more extensive overview.  Thanks to Norman and his lovely wife, Gwen Gunn, for sharing these pictures with me and the readers of this blog.--LD

Ruth Brown Thompson was the eldest daughter of John Brown, born Feb. 18, 1829 in Richmond, near Meadville, Pa.  When her father moved the family to North Elba, N.Y. in the spring of 1849, she was a young woman of twenty years, described by Richard Henry Dana in retrospect as a "bonny, buxom young woman of some twenty summers, with fair skin and red hair."1  Around this time Ruth had taken a bad fall on the ice, hurting her back.  According to another family letter, she never fully recovered, and suffered with back problems throughout her life.2  I do not know about the courtship of Ruth by Henry Thompson, however they were married on Sept. 26, 1850, during the Browns' first stay in North Elba.  Upon the urging of his wealthy partner, Simon Perkins, Jr., John Brown returned to Akron, Ohio, in March 1851, in order to continue their business endeavors.3  Naturally, Brown left Ruth with her husband in North Elba, although the father remained close to his daughter.  His correspondence--especially in religious matters--shows that she, unlike most of her siblings--shared her father's evangelical faith, and shared also his concerns for the heterodoxy of her brothers.4

Like any family, the Browns had some relational rough spots.  As far as the spouses of his adult children, neither John Brown nor the rest of the family seem to have been very impressed by Ellen Sherbondy Brown, the wife of his son Jason.  For whatever reason, Ellen "was not well liked by the Browns," in the words of John Brown aficionado, Boyd Stutler.5 Quite to the contrary, perhaps Brown's favorite "child"-in-law was Henry Thompson, Ruth's husband.  Like Ruth, Henry came from a large family, being the third of eleven children born to Roswell and Jane Thompson of North Elba.  Henry was born on Jan. 21, 1822, and was both a farmer and carpenter--and built John Brown's farm house, which still stands near Lake Placid, N.Y. as a  state historic site.   By arrangement with his father-in-law, Henry undertook to build the house for his father-in-law's return to North Elba from Ohio, in the spring of 1855.  However, Brown's return to the Adirondacks in May 1855 was more about settling his family in the home, since he shortly went to the Kansas territory to rescue his other family members from proslavery thugs, and never personally resided in North Elba again, except for short visits.  Of course, the rest is history--Brown went to Virginia and died as a result of his liberation efforts.  However, Henry Thompson figures importantly in Brown's story, insofar as he went to Kansas with his father-in-law, and proved a devoted and faithful son and warrior to the old man.  Thompson was one of the Pottawatomie killers, and until the day of his death held that the bloody act was a matter of necessity and survival. When Brown turned his focus to Harper's Ferry, however, neither Ruth nor Henry himself wanted to follow the old man into Virginia.  This was just as well for the dler Thompsons: they sacrificed two sons to John Brown's cause--Henry's younger brothers William and Dauphin.  Their sister, Isabella Thompson, was also married to Watson Brown in 1856, and was left a grieving widow when Watson was slain at Harper's Ferry.  Thus, the Thompson family paid dearly for their association with John Brown.6

In June 1860, a month before the Brown's hosted a July 4th commemorative meeting at the family farm in Lake Placid, Ruth Brown Thompson wrote to Mary Stearns, the wife of one of her father's "Secret Six" supporters, George Luther Stearns.  The letter clearly shows that she carried on the legacy of her father and fallen brothers:

The very idea of slavery is so galling to my feelings that I can hardly endure the thought. How many times I have heard my dear sainted Father, say he "hoped to live to see the day when the slaves would all be free." What an awful sin is slavery, yet how quietly the people of this country sleep over it. How many sleepless nights Father used to pass, thinking of the poor slaves, years before he made an attempt to rescue them. His great kind heart was ever "awake to their wrongs.7

In 1884, the Thompsons moved west, settling in Pasadena, California.  They were joined by brother Jason Brown. Brother Owen also settled in the following year--the two Brown brothers settling in the Las Cacitas mountains, northeast of Pasadena.  In the later decades of the 19th century, the Browns were a noted presence and enjoyed the friendship and support of many black friends, especially clergymen.  According to a 1940 article in The California Eagle, the writer looked back to the time when the Thompsons and Browns hosted a number of black ministers, carrying on the tradition of John and Mary Brown, who enjoyed close relationships with many black leaders and lay people.  The author, the Reverend William Prince, even recalled a fund-raising picnic that African American friends sponsored in order to raise money to assist Grace Thompson, Ruth and Henry's daughter, with her college tuition.8

In the 1960s, Mary Mackenzie, a grassroots researcher on the Browns in North Elba, wrote to a direct descendant of Henry and Ruth Thompson, Adeline Bryant.  Drawing from memories of her own youth, Bryant provided a brief but poignant description of her grandparents in their last years:

. . . [Y]ou ask me to tell you something about Grandpa Henry Thompson.  He and grandma were always very devoted to each other.  I lived in their home for two years while I attended Pasadena High School and I never heard them say a cross word to each other.  Grandma had trouble with her back, so used to stay in bed until around ten o’clock at which time, before she dressed, grandpa would bring her a cup of coffee, always saying, “Here’s your coffee, mama.”  After that she would dress, have a little breakfast and then go to sit in her willow rocker in the living room where she could look out upon their orange trees, when she would raise her eyes from whatever book she happened to be reading.9

Ruth Brown, the beloved daughter of the abolitionist leader, went to her rest in 1904.  Her faithful husband Henry lingered on the John Brown trail a little longer, finally departing in 1911.--LD 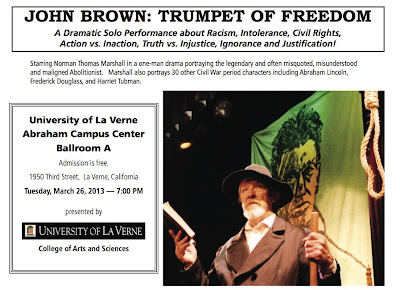