April Fools! Not--
Misquoted?  Whatever!

Tony Horwitz dropped me a note this past week regarding his recent appearance in Lawrence, linked to in the Lawrence Journal-World  (Apr. 4), saying the article was "filled with laughable inaccuracies."  Tony was not exaggerating.   "[M]ost notably," he writes, "the alleged quote of mine saying that Annie Brown [one of the abolitionist's daughters] was 'an upscale privileged New York teenager.'"  It seems Tony actually had referred to Anne as "an upstate New York teenager who was rather provincial, having spent her previous years in a remote farming community."  Pretty annoying, to be sure.  "Upstate/upscale, privileged/provincial. Whatever," the author concluded.

H. Scott Wolfe, the Maitre de la librairie of Galena, Ill., and the special correspondent of our frequent "From the Field" feature, is on the historical road once again.  Herr Wolfe made a special investigation of Harpers Ferry (formerly Harper's Ferry) in response to rumors that the historic site of John Brown's 1859 raid had become non-existent.  Happily, his communication of 10 April puts the matter to rest: "This is to inform you that Harpers Ferry still exists," Wolfe writes. "This is the result of my personal observations of yesterday."  As Brown would put it, we are all most gratifyed by the report.

April 7th has been declared "John Brown Day" according to a proclamation of New York City councilman Jimmy Van Bramer of District 26 in Queens.  On Sunday, April 7, a representative of Councilman Van Bramer's office presented the official proclamation to Josh Bowen, proprietor and pitt master of John Brown Smokehouse, the home of serious Kansas City-style barbecue in the Big Apple.  The proclamation was read aloud by Mr. Bowen before a small but enthusiastic audience, and witnessed by John Brown portrayer, Norman Marshall (pictured above, left), and your blogger (not pictured). 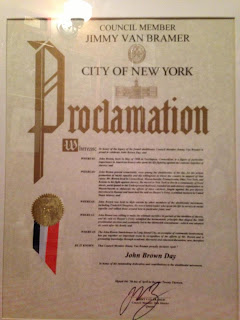 Among those in attendance were activist Martha Swan of John Brown Lives!, the sponsoring organization of the featured program of the day, "The Afterlife of an Abolitionist."  The John Brown Lives! program featured scholars John Stauffer and Zoe Trodd, co-editors of the notable publication, The Tribunal.  Prof. Trodd was also present for the presentation of the "John Brown Day" proclamation afterward.  As yours truly pointed out to the audience, New York City was not one of Brown's favorite cities, probably due to its prominent racism and economic and business ties to slavery in the antebellum era.  Interestingly, after his hanging in December 1859, his body was briefly held over in New York City en route to burial in the Adirondacks.  It is a little known fact that during the stop over, Brown's remains were prepared for burial in a rented facility on Bowery Street by an anti-slavery mortician before being shipped to its final resting place in present day Lake Placid, N.Y.   It seems that April 7 has no special relevance to the John Brown story.  However, Norman Marshall pointed out that it is the birthday of jazz great Billie Holiday.