“The Advent of a Hero”
DEDICATING JOHN BROWN’S TANNERY


For the sake of experimentation, I once purchased an immense butterfly net – with which I sought to capture a random sample of one hundred innocent, unsuspecting citizens. This sampling was totally unbiased – consisting of male and female; hyperactive and sedentary; corpulent and cadaverous; of all political persuasions…in fact, all races, creeds and prior conditions of servitude.


Once successfully netted, I would not allow these victims to regain their freedom until they answered the following query: “Who was John Brown, and what is his enduring contribution to American history?”


I recollect being sadly disappointed with the results. Most knew nothing of the Old Man. Only a smattering said that he may have had something to do with slavery. Another small segment proclaimed that he had something to do with a song…whose lyrics concerned either a mouldering body or a soul that kept marching. The Anglophiles assured me that he was the personal servant and court favorite of Queen Victoria (for which they received both their freedom and a valuable consolation prize).


Well, the butterfly net is gone – smashed beyond recognition in pursuit of a cecropia moth (who wouldn’t have known much about John Brown anyway). But the overall results linger. I continue to experience great difficulty in locating people who can provide me with a succinct exposition of the Old Man and his historical import.
Which makes it all the more amazing to me that on the first Saturday in August, in the year 1935, over five hundred members (I said MEMBERS) of the “John Brown Memorial Association” converged upon a wooded grove and picnic ground in New Richmond, Crawford County, Pennsylvania to dedicate the surviving ruins of John Brown’s tannery. Today, I could carefully bait a trap with six cases of Hershey’s M&Ms and a pair of winning lottery tickets…and still not capture five hundred people who are even aware of John Brown – let alone his Pennsylvania tannery. Back in those palmy days of ‘35, his memory still both mouldered AND marched.
******
These pilgrims came to dedicate “a bronze tablet and a plaque, memorializing the famous abolitionist of pre-Civil War days, who once lived on the farm there and built the tannery, the walls of which are still standing.” The bronze plaque, bearing an image of the Old Man, had been mounted upon a substantial boulder on the southwest side of the property…its inscription reading:
JOHN BROWN
OF
OSSAWATOMIE
AND
HARPERS FERRY
1800  1859
And the bronze tablet, mounted on the cut stone of the ruin itself, reads:


THIS IS THE
FOUNDATION WALL
OF A TANNERY
BUILT AND
OPERATED BY
JOHN BROWN
1826 TO 1835
To the northeast was placed “a cannon mounted on a boulder, with a pyramid of cannon balls on either side, which were presented to the Association by the United States War Department.” (Quite a bit of irony here…as certain uniformed representatives of that same War Department had long ago killed and captured the Old Man and his men at Harpers Ferry.)
The Memorial Association had invested $2000 toward beautification of the site – including the tuckpointing of the tannery wall; construction (by the Depression-era WPA) of a stone wall and gate along the adjacent road; the grading of the lawn; and the planting of numerous shade trees. The Association’s President, Mrs. Bess Heath Olmstead of Washington, D.C., presided at the dedicatory ceremonies.
Following an ample noon dinner served by the New Richmond Ladies’ Aid Society, the program commenced. There was music – a brisk performance by the Corry Drum and Bugle Corps – appropriate songs by the Seminary Quartette of Nashville, Tennessee – and a duet’s rendition of “Indian Love Call,” an American “household staple” first performed on Broadway in 1924. Following these artful performances, a collection was taken – amounting to the princely sum of $19.35.
The Honorable Thomas J. Prather, the Master of Ceremonies, then introduced the Speaker of the Day, John Elmer Reed, President of the Erie County (PA) Historical Association. That distinguished gentleman spoke “on the characteristics of John Brown” and declared that “the farm at New Richmond is a constant reminder and inspiration to what John Brown lived and worked for.” He noted that “it has been shown many times that Nature works many centuries preparing for the advent of a hero, and it is believed this is the case with John Brown.” The Old Man “was a great man because he was possessed of a great idea.” Reed spoke for over an hour, but “everyone seemed deeply interested to the end, because it contained much about John Brown which was new to the audience.”
Following the brief appearance of the aging warrior Logan L. Dyke of Union City, “a Civil War veteran who was in the regiment that met the enemy on the ground where John Brown gave up his life at Harpers Ferry,” Mr. Prather noted that “John Brown had lived in five states, and that five states have erected monuments in his memory – Pennsylvania being the fifth. The other states are Ohio, New York, Connecticut and Kansas.”**
The John Brown Association also took pains to express “its gratefulness to Joseph Desmond, Frank A. Loveland and Guy D. Heath of Corry, and Frank Allsben of New York City, who purchased the tannery site 10 years ago for $200 and presented it with the deed.” And following the placement of a floral wreath beneath the bronze image of John Brown, the crowd dispersed…having spent an enjoyable and eventful day.
****** 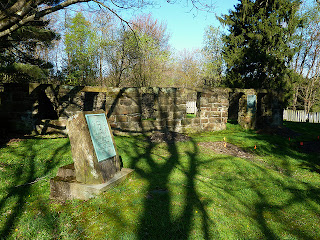 My day had been not quite so enjoyable. Despite the calendar showing late April, it had been a questionable trip across western New York and northern Pennsylvania. The higher elevations were beset with blowing snow…the lower, foggy and rain drenched. But as we sped down Route 77 in the direction of Meadville, the sun broke through and every pine bough and blade of grass seemed dripping with diamonds.
The junction sign was inconspicuous…hidden in shade…and rapidly oxidizing. “John Brown Road,” it declared. Turning left, we found ourselves on an unpaved lane…ending amidst a pond-pocked, mixed hardwood/coniferous woods…on the hill above, a farmhouse bravely venting columns of sweet-scented wood smoke.
Our first symbol of historical importance was a blue and yellow-painted historical marker (which had first been placed on Route 77 in the fall of 1946). In dappled light I read:
JOHN BROWN’S TANNERY
On the side road, a short
distance south, are the
remains of the tannery and
home built by the noted
abolitionist of Harper’s
Ferry fame. Here, he lived
and worked from 1825 to
1835, employing as many as
15 men in producing leather.
Nearby, on a primitive kiosk of decaying wood, was a telephone number – and an offer of tours and a John Brown “museum.” I set the bitter half to calling, but…instead of being an exciting link to antebellum history, it was a mundane 21st century answering machine. “Alas!,” I blurted. 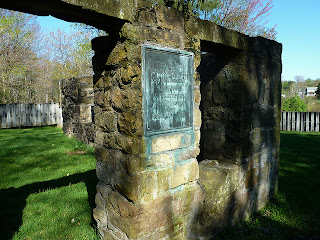 But my disappointment was short-lived as, to my right, stood the grove and ruins that had drawn that huge concourse back in ’35. It was difficult to imaginatively recreate the strains of “Indian Love Call” filtering through the pine needles. In fact, all was bucolic stillness…an occasional cricket chirping among the stones…a pair of agitated blue birds…the lowing of cattle in a nearby fenced pasture…the gurgle of running water on the adjacent hillside.  It seemed that the ceremonies were no longer under the charge of Mrs. Bess Heath Olmstead of Washington, D.C….they were supervised by Mother Nature herself.
I had the usual dry notes and statistics with me…The structure was 55 feet in length, 22 feet in width, and 9 feet in height…The foundations extend 5 feet below ground level…A fire destroyed the building in 1907…Prior to that time the structure had served as a tannery, cheese factory, jelly factory, grist mill and a residence…Frank Penfield Brown, of Erie, had designed the portrait plaque…Professor Russell D. McCommons, of the Art Department at Edinboro State Teachers’ College, prepared the model…It had been cast by the Bronze Metal Company…Ad infinitum.
But, immersed in the springtime sunlight, I thought little of statistical data. The physical environment…the sights, sounds, smells…had taken possession of me. I heard the grinding bark…the jingling traces of horses…the shouts of children. I saw John Brown, the successful entrepreneur, postmaster, pillar of the church. I also saw John Brown, agonized husband and parent, as he solemnly buried wife and son on the distant ridge.
The place had cast its magic upon me. Within the hour we were in bustling, hustling Meadville. At least our vehicle was there. My spirit was still in New Richmond, Crawford County, Pennsylvania.
******

Author’s note: Besides my own questionable recollections, the sources consulted for this heroic essay were: 1) back issues of the Titusville (PA) Herald from August, 1935; and 2) The National Register of Historic Places Inventory Nomination Form for the “John Brown Tannery Site.”


* H. Scott Wolfe is the Historical Librarian of the Galena, Illinois, Public Library District and now a regular correspondent and contributor to this blog. He has devoted many years of grassroots research on John Brown, the Harper's Ferry raiders, and related themes.

**Prather failed to note that John Brown also lived in Springfield, Massachusetts, from 1846-1849.  There is no monument there in his honor, but he is remembered at the Connecticut Valley Historical Society and museum. [--Ed.]