Osawatomie Notebook--
Atwater: John Brown was Sane and Just in an Age of Flagrant Racism 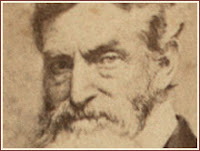 John Brown was, and is often accused of being “crazy,” and was declared to be insane primarily because he believed in the equality of African-Americans and European-Americans, and was willing to fight and die for the abolition of slavery during a historical era when African-Americans were regarded as subhuman by most European-Americans. . . .  The reality is that John Brown was a sane man who held a genuine belief that all people were equal in the eyes of God, and that African-Americans were entitled to social, legal and economic equality in the United States. Brown was a pioneer in the civil rights movement who was willing to act on his abolitionist beliefs, despite the disapproval of the majority of Americans during his lifetime.
Grady Atwater is the John Brown State Historic Site Administrator at Osawatomie, Kansas
Excerpted from Grady Atwater, “Shocking behavior was normal for Brown,” Osawatomie Graphic, 1 Aug. 2012.  Click here to read the entire article.
Posted by Louis A. DeCaro, Jr. . . at 4:54 PM