Osawatomie Notebook--
John Brown, "Presentism," and the Notion of "Terrorism"


John Brown is either labeled a terrorist or a freedom fighter, and Brown’s choice to utilize violence to work to abolish slavery in the United States is central to the debate over whether he was a terrorist or a freedom fighter. It is important to note that the word "terrorist" is mainly a modern term that is commonly used today to describe a private citizen who utilizes violence to combat a real or perceived evil in society. John Brown was not viewed necessarily as a terrorist by his contemporaries, but slave holders and proslavery advocates primarily viewed John Brown as a violent bandit; peaceful abolitionists viewed Brown as a morally incorrect extremist, and Brown’s supporters viewed him as a freedom fighter. 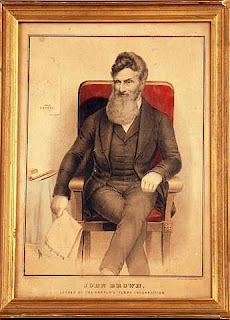