On Monday evening, June 7th, it was my honor to attend the reading of "Voices from Harpers Ferry," a play that is centered on the black men who joined John Brown in his raid on the town and armory of Harpers Ferry, Virginia (today West Virginia) in October 1859.  The role of Osborne P. Anderson was played by Reg E. Cathey, Dangerfield Newby by Danny Johnson, Shields Green by Brandon Gill, Lewis Leary by Keldrick Chowder, and John Copeland by Keith Eric Chappelle.  The performance, one of five plays presented in The New Black Fest reading series, was held at the Audubon Ballroom in Manhattan as part of the American Slavery Project in collaboration with the Classical Theater of Harlem.   The New Black Fest guest curators are Judy Tate and Godfrey L. Simmons Jr. 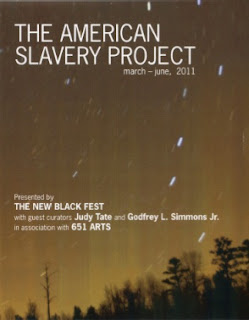 "Voices" was well attended and enthusiastically received--the story being an artistic dramatization of the interrelationship of Brown's black raiders, only one of which escaped after the failure of the raid.  The title of the play itself was inspired by raider Osborne Anderson's 1861 book, A Voice from Harper's Ferry, which was written to counteract the slave master propaganda put forth by the press following the raid--especially the notion that local blacks were too afraid to fight.  Playwright Dominic Taylor has skillfully crafted a moving story about these men that takes place on both the physical and metaphysical plane.  Taylor presents the black raiders as men of varying philosophies and outlooks, from devoutly Christian to atheist, from good natured to hard-shelled and cynical.  Obviously the playwright is artist, not historian, but a good work of art that involves historical figures should find some grounding in historical evidence, and Taylor certainly is mindful of the men who lived and the story of the raid although he is addressing truth first through the heart and feeling, which is the right of the artist.  Yet key to the play is the central figure of Osborne P. Anderson, the surviving black raider who later fought in the Civil War and died in the early 1870s, largely overlooked in his passing.  The story begins with the discovery of Anderson's body on the street in Washington, D.C., and then the playwright carefully leads us back through the story of the black raiders in all their humanity and sacrifice, and then their final reunion with Anderson, the last of their circle to die.

It was my pleasure to be invited to participate in a post-reading panel discussion with Mr. Taylor, hosted by Judy Tate, which allowed us to further discuss the meeting of history with the play.  Most importantly, curators Tate and Simmons designed the New Black Fest series as a response to the popular revisionism of the Civil War sesquicentennial.  The American Slavery Project is not only concerned with honoring the work of black playwrights, but also initiating "new conversations about theater's role in counteracting revisionism in our nation's discourse about the Civil War and slavery."

Playwright Dominic Taylor is a seasoned writer, director, and Assistant Professor at the University of Minnesota.  As a playwright, he has been commissioned by The Goodman, Steppenwolf, and New York Theatre Workshop, and is the winner of various awards and grants.  He is also the Associate Artistic Director at Penumbra Theatre Company where he spearheads the OKRA New Play Development Program.   His latest play, "I Wish You Love," will be staged at the Kennedy Center this month and at Hartford Stage next month.  Mr. Taylor has taken his undergraduate and graduates degrees from Brown University and is a board member of the Givens Foundation for African American Literature.

As a postscript, it was very moving for me to participate in the panel discussion also because it took place in the renovated space that once was the Grand Ballroom of the Audubon Ballroom in Manhattan, the site where Malcolm X held regular meetings of his Organization of Afro-American Unity (OAAU) in 1964 and early 1965--including the OAAU meeting of February 21, 1965, when he was brutally assassinated by a team of "Black Muslim" hit men sent from the Nation of Islam "mosque" in Newark, New Jersey.  As a graduate student in the late 1980s, I gained entrance to the same ballroom space, which at that time was quite in ruins.  I still remember the morbidly poignant "tour" that I took--the swollen, warped floorboards, the scattered chairs, and the bullet marks still on the wall--a haunting reminder of the malicious and wicked attack that ended Malcolm's life at thirty-nine years.  Today the walls of that space are filled with large, panoramic scenes from his life, and a few of the original floorboards are left visible as a reminder of the days when Malcolm's voice echoed in the ballroom.  The Audubon now has a mini museum on a lower level (I think about where the old San Juan Theater used to be) dedicated to Malcolm's memory, where people can view educational videos about him.  It has been a good while since I transitioned from being a Malcolm X scholar to being a student of John Brown, but this evening gave me a unique opportunity to see two phases of my own life, along with two very important historical themes in the history of black struggle, come together in a resonant and meaningful way.  I think John Brown would call it a "kind Providence."
Posted by Louis A. DeCaro, Jr. . . at 2:14 AM