Harpers Ferry News:
The Unlucky Irishman Gets a Monument

Private Luke Quinn and his fellow leathernecks rolled up on Harper’s Ferry, [West] Virginia, in a special train provided by the Baltimore & Ohio Railroad, arriving at eleven o’clock at night on October 17, 1859. Quinn was among the ninety or so marines at the barracks in Washington D.C. when called into duty by First Lieutenant Israel Green.  He was twenty-four-years-old, and certainly  had no idea that he was about to go down in the history books as the only marine casualty in one of the most famous incidents of his century.

Most readers know that the marines successfully stormed the armory engine house where Brown, his men, some enslaved black allies, and hostages were holed up. Jean Libby has noted that a valiant effort was made to storm the engine house the previous afternoon, led by some brave railroad men. Although they were driven back by Brown’s ferocious firepower, the railroad men left the ladder in the yard that they had used to ram the doors of the engine house. As Libby has noted, this likely was what raider Osborne Anderson saw as he fled for his life from Harper’s Ferry, mistaking it for the final marine assault that took place the following day. This is an important point since historians discredited Anderson’s eyewitness account entirely, as if he had lied about what he saw. However, despite his having confused the details of what took place on Monday (Oct. 17) afternoon with Tuesday's (Oct. 18) marine assault, the the former justifies Anderson’s testimony. It also explains where the marines got that ladder that they used for their successful attempt to break into the engine house the next morning. [See Jean Libby, Black Voices from Harpers Ferry (Palo Alto, Calif.: Printed by the author, 1979), 154 and n. 13.] 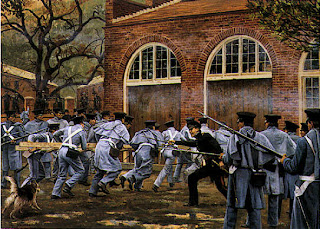 It is typically assumed that when the marines initially burst through the engine house door that Brown’s men began to fire upon them. For instance, Boyd Stutler, the preeminent John Brown scholar, wrote: “Up until the door was broken in but little firing was done, but at this time a volley from the defenders killed Private Luke Quinn and seriously wounded Private Rupert. Lieutenant Green sprang through the breach with his men, and, being armed only with a light dress sword, attacked Brown with the frail weapon. . . .” [see Boyd B. Stutler, “Old John Brown’s Fort,” The West Virginia Review (June 1926): 336-38.]

According to marine historian Bernard Nalty, after the engine door was rammed open, “the Leathernecks came spilling into the building just as Brown was reloading his weapon.”  But he identifies Israel Green as being the first to jump from cover and bound through the opening. Armed only with his light dress sword, Green jumped from the cover of the abutment and bounded through the opening. Fortunately for Green, who would later become a Confederate officer and a great liar--he was not shot by Brown or his men. [See my entry, “The Slavemaster’s Butcher: Answering Leatherneck Magazine and Israel Green," August 10, 2010.]

Typically, the fact that Green was not shot dead has been attributed to Brown’s coincidental need to reload his Sharps rifle. But Brown was not the only one with a rifle, and it is more likely that Green was spared because Brown and his men actually were trying to surrender and chose not to fire on him when he entered through the breach. Furthermore, Green had no weapon, except for a costume sword that he forgot to exchange for the real thing.

Military scholars may clarify or correct me on this point, but it seems unlikely that Lieutenant Green would follow his men into the engine house when the doors were broken through.   Nalty points out that the next marine to enter after Green was Major William W. Russell, the marine paymaster. (Russell went to Harper’s Ferry as an assistant to Green because he was a staff officer and not permitted to take command over the marines in this action.)  Curiously, Russell was no better armed than Green, entering the engine house with kind of bamboo (rattan) switch. So actually it appears that the first two officers to enter the engine house were not armed with rifles/bayonets. [Bernard C. Nalty, “The United States Marines at Harper’s Ferry, 1859” (Washington, D.C.: Department of the Navy Headquarters United States Marines/Historical Branch, G-3 Division, 1962), 2-7.] 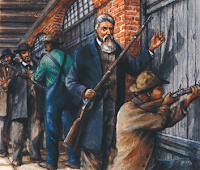 If this is a feasible description, then we may understand more fully why neither Green nor Russell were shot down immediately upon entering the engine house. Not only did Brown and his men probably hold back their fire because they were trying to surrender at the last minute (as Brown later stated), but they also may have refrained from shooting Green and Russell because they were unarmed.

However, in Private Quinn’s case, coming in third place was anything but lucky for the young Irishman. He was armed, although he never had a chance to discharge his weapon or impale anyone on his bayonet, as the marines did who followed in afterward. Quinn took a bullet to the abdomen from one of Brown’s men, who by then probably realized that their surrender plans were going badly. Private Matthew Rupert, the marine who followed Quinn, also took a bullet—in the mouth—but survived. But poor Quinn was not so fortunate. His funeral was presided over by another Irish immigrant, Fr. Michael A. Costello of St. Peter's Roman Catholic Church in Harper’s Ferry. Costello seems to have been the same priest who tried to visit John Brown after his defeat but was harshly ordered away by the Old Man (who wanted nothing to do with either proslavery preachers or Roman Catholic priests—particularly proslavery Roman Catholic priests.)  Like Costello, Quinn was also an Irish immigrant, the latter having come to the U.S. as a boy, later to join the marines in Brooklyn, New York. Perhaps he had no family in the United States to claim his body. Regardless, he was buried in the cemetery of St. Peter's Roman Catholic Church. Quinn's gravestone is still in the church cemetery today, as is the gravestone of Father Costello.

Last month (24 May) it was reported by the Herald-Mail [Hagerstown, Md.] online that a 3,500-pound granite monument honoring Private Quinn was placed at Harper’s Ferry on May 24, 2011. It sets less than a quarter-mile from where Quinn fell "while assaulting Brown's position.” According to the Herald-Mail, the Quinn monument was built in three sections and stands almost seven-feet in height, and was designed by Hank Happy of Charles Town, West Virginia, a Civil War re-enactor who portrays a marine at Harper’s Ferry. The monument shows a marine dressed in the antebellum uniform, standing at attention. The inscription reads:


IN MEMORY OF PVT LUKE QUINN only Marine killed in John Brown's raid October 18, 1859. Pvt. Luke Quinn came from Ireland in 1835 and enlisted in the Marine Corps in 1855 in Brooklyn, N.Y. He was sent to sea duty then transferred to Marine Barracks in Washington, D.C.. He came to Harpers Ferry with Lieut. Col. Robert E. Lee. Then was killed in the storming of the engine house. His funeral was in St. Peter's Catholic Church (in Harpers Ferry) by Father Michael Costello and he was buried in St. Peter's Catholic Cemetery.

The Herald-Mail points out that the monument inscription errs by stating Quinn came from Ireland in 1835, when actually he was born in Ireland that year.

Interestingly, a monument to the little known Irish marine is especially well greeted by the owner of a Harper’s Ferry drinking establishment named after him, The Pvt. Quinn Club on Potomac Street. "That's great. Now I won't have to keep trying to explain it," says the pub’s owner. "Customers are always asking who Pvt. Quinn was. Now I know he was a real person."  [Richard F. Belisle, “Memorial Honors Only Marine Killed in John Brown Raid,” Herald-Mail [Hagerstown, Md.], 24 May 2011.]

Postscript: Nalty makes the passing observation that marines were utilized in the aftermath of the Nat Turner rebellion of 1830--once more a reminder that in the antebellum era, the Leathernecks served double duty as hunters and killers for the slavocracy of the United States.
Posted by Louis A. DeCaro, Jr. . . at 11:47 PM