This week (June 21) I made note of a well-intended idea that came forth from the Old Man's admirers, the goal of which was to relocate the remains of Owen Brown, son of the liberator, from his neglected resting place in California to the Brown family farm in Lake Placid, a New York State historic site.  It was my suggestion, affirmed immediately by others, that the idea of moving Owen Brown is really a matter for the Brown family descendants to decide.  Shortly afterward, Alice Keesey Mecoy wrote to us, and I have her permission to share her thoughts on the matter.  Of course, we would only add our "Amen." 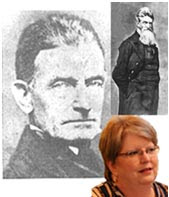 A few years ago, Brendon Mills, Ranger/Curator of the John Brown Farm in North Elba, contacted me regarding my giving permission to have Owen Brown's body disinterred, and brought to North Elba for burial. At that time, I was more than happy to say yes to this unique request. My reasons were, I thought, sound – the man who owns the land had fenced off the site; Owen died without heirs; the headstone was missing; what difference could it make where Owen was buried?
I was very naive back then, to say the least. I am no longer in agreement with the plan to have Owen's body moved, and will adamantly oppose any plans to do so. My reasons are below.
At the time of the first request, I had only attended a couple of funerals, and had not visited many cemeteries. Now, after years of studying the Brown's and working so closely with the genealogy, I find that the very act of visiting the graves of my ancestors invokes strong feelings and emotions that are at times overwhelming and indescribable. While I am sure that the feelings would be the same no matter where Owen rests, I feel that the original place of burial is an important part of the history not only of the family, but of America as well.
Buried near the top of what locals called "Brown's Peak," Owen is at home. He lived there for many years, interacting with the prominent citizens of the neighboring towns. He was one of the 21 founding settlers of Altadena, and well respected. Close to 2000 mourners attended his funeral in town and around 300 braved the treacherous route up the mountain for the graveside service. In 1900, attendance at the dedication of the stone gravestone was high, as was the picnic held on Brown's Peak to celebrate the 100th anniversary of John Brown's birth. The people of Altadena and surrounding areas are proud to have a "son of the liberator" buried there.
The Sierra Club near Altadena took the landowners to court twice to ensure continued free access to the gravesite. In 2006 they succeeded – based on previous historical access; the property owner lost and now must allow any and all who wish to visit the gravesite complete access. In 2008, The Sierra Club rebuilt the trail up to the former sites of Owen and Jason's cabins and the gravesite.
If we move Owen, where do we stop? Do we go to Put-In-Bay Ohio and remove John Jr. from his final resting spot? What about Frederick, who died during the Osawatomie uprising, do we remove him to North Elba? What of Brown's wives, Dianthe and Mary, shall we uproot them as well? Do we move only the sons, who fought beside Brown; all eight children who outlived "the old man"; or do we also move all of the little children that were lost along the way? If we move the Brown's, do we also move the family members? Where would this end?
American history is full of stories about the movement and scattering of family members. Gravesites show us the routes taken by our ancestors as their lives flowed and ebbed with the changing times. By moving Owen, we would disrupt the profound impact he, and others like him, had on the world as they moved through their lives.
My answer is no, please do not move Owen Brown from the resting place he himself chose.
Alice Keesey Mecoy
http://johnbrownkin.blogspot.com/
Great-Great-Great Grand Daughter of John Brown, Abolitionist
Alice Keesey Mecoy
Daughter of Paul Keesey
Son of Beatrice Cook
Daughter of Bertha Adams
Daughter of Annie Brown
Daughter of John Brown, Abolitionist
Posted by Louis A. DeCaro, Jr. . . at 7:51 PM