More on the Murder of Frederick Brown by the Rev. Martin White, August 30, 1856

An interesting document is found in the papers of the Rev. Clarence S. Gee, a Congregational minister (d. 1975), who perhaps was second only to Boyd B. Stutler as a documentary researcher of John Brown in the 20th century.  Gee amassed the most important collection of materials pertaining to the Brown family history, the collection now held in the wonderful Hudson Library & Historical Society in Hudson, Ohio.   In the early-to-mid 20th century, Gee came to know Brown family members and extended family, through whom he obtained a good bit of personal correspondence and documentation relating to John Brown.
One such document is this brief transcription, undated, which Gee made from the writings of the Rev. Samuel L. Adair, the brother-in-law of John Brown who preceded the Brown boys in moving to the Kansas territory.  At first, Adair was very critical of his brother-in-law and nephews for their role in the Pottawatomie killings of May 1856, but like most passive free state settlers in Kansas, Adair came to recognize the validity in Brown's harsh actions against terrorist collaborators living in the vicinity.  As Salmon Brown put it, "Adair came around later."1
Gee labeled this brief portion "No. 3," since it was the third document in Adair's hand where the clergyman addressed the death of Frederick Brown at the hands of the Rev. Martin White on August 30, 1856.  It follows according to Gee's transcription:
Frederick Brown (No. 3)
There was a third document found among the papers of Rev. S. L. Adair pertaining to Frederick Brown. It is practically the same as No. 1, with the few changes at the end. I have copied the last part of it. – [Clarence S. Gee]
We parted with his saying that he would call early next morning and carry any letters I might have ready to send to the states, with him to Lawrence and send them via Nebraska.  He went to a neighboring house, where the young man who had come with him had stopped, and spent the night.  Early on the next morn he rose, fed his horse, and was on his way to get the letters, when coming to the road near my house he saw some men coming from towards town.  He halted for a moment and when they drew near said, “good morning, boys,” and then asked, “Are you going to Lawrence today?”  They answered in the negative and then remaining silent, he soon remarked, “I think I ought to know you,” when Martin White replied, “I know you, and we are foes,” and as he spoke raised his gun and shot him.  Martin White was accompanied by four other men and what I have given is the substance of the statement made by one of the party in the presence of a friend of mine.
Frederick Brown was shot down in the road near my house.  The firing of the gun and the running of the horses aroused me and a cousin of mine, who was at my house.  I ran to the door and saw men riding away.  My cousin and myself started immediately to the road and saw the body lying there.  His side arms were on him; they had not been touched.  The cap over the sheath of his revolver was buttoned down.  His Sharps rifle he had left at the place where he had stopped over night.
One of White’s party stated in the presence of a friend of the writer that they had been down near town and were returning when they saw Brown walking across the prairie; and when he came to the road he saw them and halted, and when they came near said, “Good morning, boys, are you going to Lawrence today?”  They answered, “No,” and saying nothing more Brown, stepping toward them, said, “I think I ought to know you,” at which Martin White, being now quite near to Brown, said, “I know you and we are foes,” and as he spoke shot him.
This is probably as near a true statement of the particulars of his death as can be given.  A number of things incidental known to the writer, led him to believe that the statement made by that person was substantially correct, while this story, as published in Geary’s book on Kansas,2 that Brown had stolen his horses, and that he saw him riding one and leading another that morning, is wholly false and can be proven by many witnesses.  –Rev. Samuel L. Adair
1 Salmon Brown's statement to Katherine Mayo on the Pottawatomie killings (Portland, Or., Oct. 11-13, 1908), p. 3, in Pottawatomie file, Box 6, John Brown Oswald Garrison Villard Papers, Columbia University Rare Book and Manuscript Collection.

2 The book to which Adair is referring is actually John H. Gihon, Geary and Kansas: Governor Geary's Administration in Kansas: With a Complete History of the Territory Until July 1857 (Philadelphia: Chas. C. Rhodes, 1857).  The specific citation, on page 100, follows: 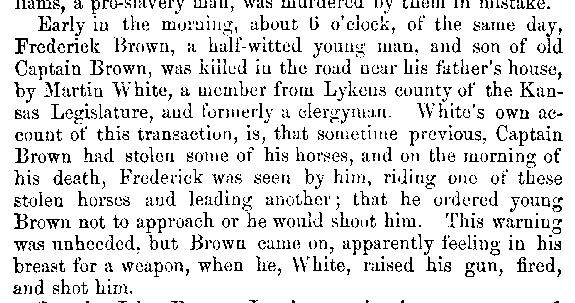