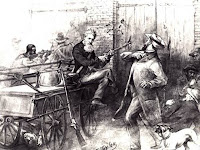 Do You Know About This Movie?

In 1960, a year after the centennial of the Harper's Ferry raid, director Sidney Lumet did a film entitled "John Brown's Raid" for the television series, Playhouse 90.  According to a digitized version of Time magazine dated October 31, 1960, Lumet's "John Brown's Raid" aired from 10-11 P.M. on the National Broadcasting Company (NBC) on October 25 that same year, and was filmed on location at Harper's Ferry.  I've never heard anyone mention this program and have not been able to find much of anything on the internet about it except for a description on the Internet Movie Database (IMDb).  IMDb lists Sidney Lumet as the director, Robert Crean as writer, and among the actors most notable are the late James Mason in the role of Brown, and the late Ossie Davis in the role of Shields Green, an associate of Frederick Douglass.

Happily, a brief but informative description of the television production is recalled by character actor, Tim O'Connor on The Classic TV History Blog.  IMDb lists O'Connor as having played "the Doctor"-- the real doctor in the story being John Starry.  In an interview on February 26, 2010, O'Connor recalled:

"We went down to the location, of Harper’s Ferry, and shot it for ten days.  Sidney Lumet directed.  The last four days, there were some of us who worked day and night without stop.  The show got into real trouble, and the company didn’t want to pay us for playing twenty-four hours a day, four days!  So there was a big stink about that.  We had to go to the union about it and make some arrangement.

The show then turned out so dark, that you could not tell the difference between the people who were white and the guys that were black.  It was just so funny.  But they broadcast it – they put it on!"

The Encyclopedia of Television (p. 1387) says that Lumet’s story of the raid was done in two parts, as was also his production of a story about the controversial Italian anarchists, Sacco and Vanzetti, both programs for the popular NBC series.

I've not been otherwise able to find anything on this film, but if you do, I'd be interested in knowing.