“A Glint of John Brown”?  More John-Browning Terry Jones
The other day (see Sept. 10th entry) I pointed out the problem of what I call “John-Browning,” a tendency—usually among white writers to identify the abolitionist John Brown with problematic, controversial figures in our own time—particularly people who shoot abortion “doctors” and terrorists stateside and abroad.  To no surprise the latest version of this game is Pastor Terry Jones, the would-be Qur’an burner.  Even before I could finish my last post, which was partially in criticism of a Canadian journalist, a blogger made the same comparison between Jones and Brown, purportedly just on the basis of looks.
Not even two days later is an Op-Ed piece in the Washington Post (Sept. 14) by columnist Richard Cohen—unfortunately more of the same.
In his essay, Cohen begins by announcing: “There is a glint of John Brown in the eyes of the Rev. Terry Jones.”
Really, Mr. Cohen, “a glint”?
Cohen, who claims not to be anti-Muslim and is personally opposed to the idea of burning the Qur’an, nevertheless says that he “stands” with Jones.  Even though Jones’ intention of burning the Qur’an is “chaotic and bigoted,” Cohen says, “it was a political statement nonetheless, and he had every right to make it.”  Another slave of secular democracy speaks.
As to Cohen’s appropriation of John Brown, I can only say that once more this approach is indicative of a cultural bent that is typical in “white” society when it comes to how the abolitionist is perceived and remembered.  Cohen’s reading of Brown, which he expresses by alluding to a “glint”—presumably of madness—is entirely subjective.   To his credit,  Cohen does not seem to allow for an absolute parallel.  At least he recognizes that Brown’s antislavery cause was great, and also that some very weighty thinkers, the likes of Emerson and Thoreau, considered John Brown as a great man.  In contrast, Cohen says that Pastor Jones is “neither a great man nor the leader of a great cause.”  Yet, Cohen—with neither adequate background nor any historical evidence, suggests the possibility that Brown was “possibly mad.”
Why do these gratuitous references to John Brown begin with innuendos or even allusions to madness?  Whence does this default judgment of the abolitionist’s madness and mental instability originate?  Most of us have a good idea: it has been worn into the collective thinking of “white” society by the prejudice of ill-read historians, romantic screenplays, hackneyed high school textbooks, sensationalistic journalists and novelists, and neo-Confederate screeds.  There’s no end to this knee-jerk reaction, evidently because so many people find some kind of gratification in it.  Does it indicate some residue of racism?  Perhaps in many cases, but somehow I doubt that’s the case here.  Yet when writers like Cohen get carried away with these notions of Brown, there must be some kind of “glint” in their eyes too.   Just what that glint is remains a point of discussion.
Before I close, let me underscore my point by introducing the following photograph of John Brown.
What do you see, a “madman”?
Most people with any exposure to/knowledge of John Brown from popular culture or the public school system and universities in the United States have actually been conditioned to answer in the affirmative.  The madness of John Brown, the infamous “glint” of insanity is readily assumed by many people.
Look closer and let me ask you again: Do you see the face of an insane man? 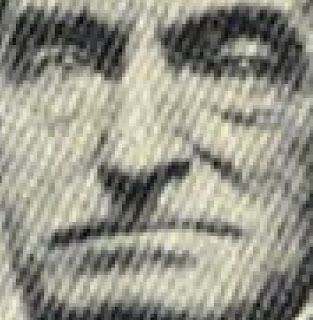 According to Jean Libby, a foremost John Brown aficionado and the undoubted authority on photographic images of the abolitionist, this particular photograph is a half-plate daguerreotype made in Boston, sometime between 1856 and 1857 by John Adams Whipple.  It is a mirror view as a result of the daguerreotype production process.

As Libby reports in her groundbreaking work, John Brown Photo Chronology, a forensic anthropologist examined this daguerreotype, as did a plastic surgeon, in separate reviews.  Dr. Eileen Barrow, the forensic anthropologist, concluded: “His face shows signs of a mild stroke.”  The plastic surgeon, Dr. Tad Grenga reported: “The eyelid weakness and the wider pupil on the left certainly might be from small stroke affecting the third cranial nerve.  The facial muscles seem to be symmetrical from right to left so the seventh nerve was OK.”1
This is not the face of a man who is insane.  It is the face of a man who was physically afflicted with a number of illnesses.  As Libby also points out, Brown’s letters from 1857-59 suggest that he struggled with physical ailments that beset him, sometimes laying him out for days and weeks.  Certainly Brown had repeated bouts of what was commonly known as “Fever and Ague,” a kind of prairie virus similar to malaria.  In the spring of 1859, prior to his move to Maryland in preparation for the raid on Harper’s Ferry, Brown complained of a condition that he described as unpleasantly affecting his head and ear. On April 7, 1859, he wrote to his wife: I have been entirely laid up for more than a week with a terible [sic] gathering in my head; & with the Ague: but am much better now.”  Later that month, Brown wrote to his faithful lieutenant, John Henrie Kagi, “I have been again entirely prostrated with the difficulty in my head, and with ague, so that I have not yet been able to attend to any business.  I am now some better, but do not think I shall be able to do much under a week or more.”2
Subsequent to these professional evaluations, Libby reported that another important evaluation of the daguerreotype was made by Greg Artzner, a registered nurse, better known as one-half of the talented musical duo, Magpie.  In October 2009, Artzner suggested that the drooping side of Brown’s face probably indicated facial paralysis, better known as Bell’s Palsy.   Jean Libby has provided this description from the National Institute of Neurological Disorders and Stroke: Bell’s Palsy typically affects only one of the paired facial nerves and one side of the face; common symptoms could be drooping eyelid and corner of the mouth, ringing in one or both ears, headaches, and dizziness among other things.   According to Brown’s great-great-great granddaughter, Alice Keesey Mecoy, other members of her family have suffered from this condition.
When considering Brown’s depleted health, we should recall that from 1856 until his defeat at Harper’s Ferry in October 1859, most of his life was characterized by stress—the entire Kansas episode, including the Pottawatomie killings, the gun murder of his son Frederick, open warfare and guerilla struggle in the Kansas territory eventuating in a return to Ohio in a debilitated condition.  Between 1857 and ’59 he traveled extensively in the United States and Canada with a minimal budget and the concerns of supporting his family at home, and then a highly difficult trek involving a liberation raid into Missouri in late December 1858.  Carrying eleven liberated people with his men, Brown escorted them through Kansas, then through Nebraska, and well into Iowa in the dead of winter in wagons and on horseback.  After getting this group safely into Canada, Brown was still sick, or had a relapse of his former condition.  At the time of the raid at Harper’s Ferry he was undoubtedly not recovered fully.  Certainly during the last two years of his life, encompassing the time of this daguerreotype, Brown was a sick man.
Despite the weight of these evaluations and the historical context, as well as the absence of any evidence of insanity, people will continue to assume a "glint" of madness in Brown's eye, just as they will persist in calling him forth as an example for the next national controversy, always in accommodation to their prejudices.
"A prejudice is a vagrant opinion without visible means of support." Ambrose Bierce
1 Jean Libby, John Brown Photo Chronology: Catalogue of the Exhibition at Harper’s Ferry 2009 (Sunnyvale, Calif.: Far Western Graphics, 2009), 40.
2 John Brown, Kingsville, Ohio, to Mary Brown, North Elba, N.Y., April 7, 1859.  Transcribed from the original, sold by Swann Auction Galleries, February 25, 2010, Sale 2204 Lot 23; John Brown, North Elba, N.Y., to “John Henrie,” April 25, 1859, Dreer Collection, Historical Society of Pennsylvania, Philadelphia, Pa.
Posted by Louis A. DeCaro, Jr. . . at 10:41 PM