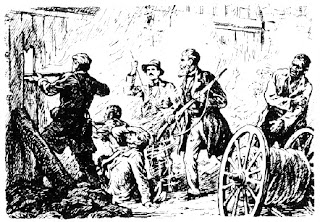 I just viewed the short video, “John Brown's Raid,” featured on the website, History.com.  While this short feature has very interesting graphics, the narration by an unidentified “expert” is horrendously incorrect and quite misleading as to the facts.  It is not merely that this narrator is without balance; he is grossly incorrect, particularly in the repeated insistence that the raid was poorly planned and entirely without basis.
There is no lack of “experts” ready to narrate the life and work of John Brown, many of them completely lacking in primary research experience and tending to parrot what they’ve heard and read from other such “experts.”  This video provided by History.com is a perfect example of the real danger of half-truths and bigotry being conveyed under the polished cover of historical authority.
Let us be clear:
1.  John Brown’s overall plan was reasonable and fully supported by Frederick Douglass and Harriet Tubman.  Like Brown, these black leaders and other radical abolitionists firmly expected a positive response from enslaved people.
2.  Although Douglass and even some of Brown’s own raiders objected to his decision to seize the armory at Harper’s Ferry, the plan to do so was also strategically reasonable.  The proof is in the ease and success of the assault.  Brown did a great deal of advance planning and knew the town and armory operation were poorly guarded and without military presence.
3.  Brown’s error in the Harper’s Ferry raid came down to timing and to mistaken judgment in the case of allowing a train to pass through the town, and by allowing himself to become taken up with parleying and exchanges with captured slave masters.  He delayed far too long, turning what should have been a relatively brief strike into an occupation.  Were Brown simply to have left by or before sunrise, he could easily have walked out of Harper’s Ferry with his raiders, a preliminary cadre of black men, and his fugitives.  His delay was the single, deadly flaw and he and his men paid dearly for it.
4.  The myth of lack of support from local African Americans is perhaps the worst aspect of conventional thinking on the raid.  It is not only insulting to Brown’s plan, but far more an affront to black people and what is clearly shown in history regarding their real response to slavery.  We know that from the onset the outcome of the raid was revised by Virginians, something that moderates in the North readily accepted.  The propagandistic revision of Virginia was essentially that blacks held as slaves resented Brown’s attempt to “force” them to turn against their good masters, and that they were content in their condition; or that blacks were too timid and cowardly to join Brown.  Neither of these claims is true.  Osborne Anderson, one of Brown’s raiders, wrote clearly to this point in 1860, in A Voice from Harper’s Ferry.  It was the Virginia slaveholders, Anderson recalled, who were the frightened, weepy cowards.   In contrast, we know that Brown's raid had both immediate and long-term impact upon the enslaved community, primarily in Jefferson County, but also in bordering counties.  We know that there were more black men in the town of Harper's Ferry than historians (mainly white males) have conventionally acknowledged; we know of at least two solid contemporary black eyewitnesses (Osborne Anderson, a raider, and Anthony Hunter, a slave) that the local black community was brimming with excitement and support, and that Brown would have had a magnet-to-steel influence had he just left the town of Harper's Ferry and availed himself of the gathering black presence awaiting him.  We also know that Brown himself was actually surprised at the extent of the response from the black community; as historian Jean Libby (a specialist in this study) observed, Brown even did some "damage control" after the fact by writing to the District Attorney, engaging in a little revisionism himself by claiming to have "taken" slaves, doubtless with the intention of playing down the extent to which blacks had turned out in his favor.  He had a reasonable concern that Virginia whites would retaliate against the black population after the fact.  After all, Virginians had massacred scores of innocent black people following the Nat Turner incident.
Much more can be written to point out that—at the very least—conventional ideas about the Harper’s Ferry raid are grossly incorrect and many historical “generalists” (like the narrator of the this video) have done more harm than good by perpetuating these errors, and even magnifying them with their own subjective notions.  Unfortunately, it is all too evident that unlike other historical controversies, no small segment of scholars, historians, writers, and people in general have an emotional, psychological, and perhaps political investment in the conventional version of the Harper's Ferry raid.  Evidently, History.com caters to these prejudices by reinforcing as "history" what in actuality is political propaganda.
The Harper’s Ferry raid failed, but many such risky ventures have both failed and succeeded, and any reasonable reading of history must take into consideration the unpredictable influence of “time and chance.”   We admit, with John Brown himself, that the failure of the raid perhaps turned out for the best, since his subsequent witness against slavery and his hanging actually backfired on the slave power, driving pro-slavery leaders to such desperate lengths that they would have to forfeit the very “institution” for which they were even willing to sacrifice their own sons by the thousands.
Posted by Louis A. DeCaro, Jr. . . at 10:04 AM