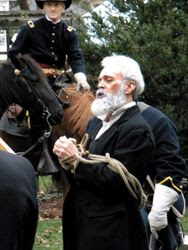 Magpie's Greg Artzner as John Brown
John Brown's Final Day Reenacted
A crowd of school children, office workers and others gathered under gray skies Wednesday morning as the verdict was read, and John Brown's fate was once again sealed.
"It's amazing," said Alice Keesey Mecoy, the great-great-great-granddaughter of the Harpers Ferry raider. "I don't have words for it."
Wednesday marked the 150th anniversary of Brown's death at the gallows, a sentence he received following his October 1859 raid on a local federal arsenal.
After the raid concluded, the famed abolitionist was arrested and transported to Charles Town, where he was tried for treason.
Brown was found guilty by a jury that reportedly deliberated for 45 minutes before coming back with its decision, said Bob O'Connor, a local author and historian who was among the many participants in Wednesday's commemoration.
O'Connor said the tone of those who were on hand for the reading of the initial verdict was somber. So too was the tone of the crowd that gathered 150 years later to remember the event. As O'Connor and others re-enacted the verdict's reading, a woman in the audience wiped a hand across her eyes. Nearby, a horse-drawn carriage waited for a re-enactor who played the part of Brown, who would ride atop a coffin to the site of the gallows, just as Brown himself had done before.
Once the re-enactor arrived, the carriage made its way slowly down the streets of Charles Town. Drummers in period garb beat out a mournful tune as they followed behind him, flanked by the nearly 300 onlookers who had gathered for the remembrance.
As residents young and old followed along on the march toward the lot on Samuel Street where Brown was hung, families and workers peered out of their windows to catch a glimpse of the historic procession.
The day was one that was filled with mixed emotions. Brown had believed strongly that slavery needed to be brought to an end, a cause that prompted his historic actions in nearby Harpers Ferry. His raid served as the spark for a war that brought freedom to people of all races.
Some said they were happy to get the chance to participate in the commemoration of the event.
"I am putting this down as one of the happiest days of my life," said Dick Gregory, a renowned stand-up comedian who made an unexpected appearance at the event.
Mecoy agreed that the day was filled with strong feelings.
"It's just been an emotional morning for me," the Texas resident said following the ceremony.
Moments earlier, she had stood under the mock gallows for a wreath laying in honor of her ancestor.
"I'm very overwhelmed by the response to this," she said as she addressed those who had gathered.
She said Brown had lived his life as a loving father and husband who was committed to a utopian ideal. He longed for equality and the abolition of slavery, she said.
"To own another person was not something you can do," she said of her great-great-great grandfather's beliefs.
Mecoy said those goals have not quite been reached yet.
"But we're getting there," she said.
Slavery was ended in the United States as a result of the Civil War, a conflict that Brown's raid helped to launch. Even so, Mecoy noted that slavery does continue in some parts of the world. She urged those in attendance to join in the effort to make sure the practice is finally brought to a complete end.
The event, which was sponsored by the Jefferson County NAACP and others, came to an end as the horse-drawn carriage made its exit, carrying with it Brown's casket. As it slipped out of sight, audience members raised their voices to sing "John Brown's Body," and jazz musician Joe Wilder paid a final tribute through a trumpet solo.
Source: Naomi Smoot, "John Brown's Final Day Remembered," The Journal on line [Martinsburg, West Va.], Dec. 3, 2009
Posted by Louis A. DeCaro, Jr. . . at 12:04 AM